• Some teams are yet to submit their registration forms forcing us to craft the fixtures on the match day contrary to the past-Chege. 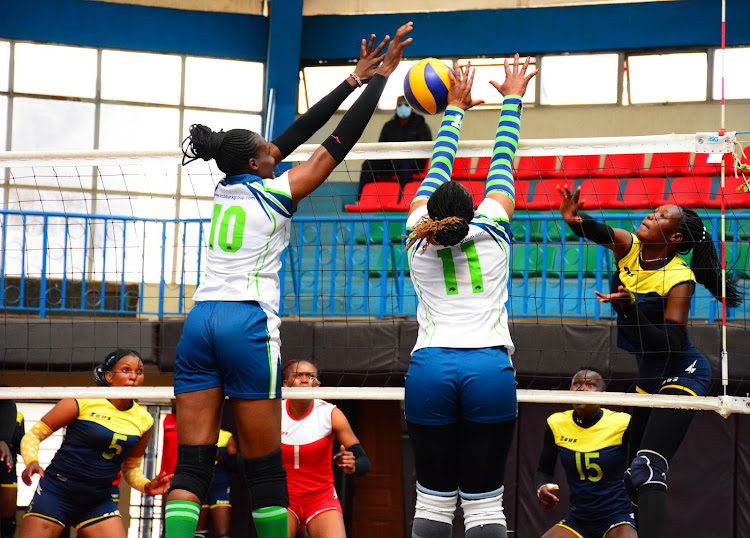 KCB's Edith Wisa and Ernestine Akimanizanye block a shot from Caroline Jeruto of DCI in a past KVF league match.
Image: FILE

The 2021/22 Kenya Volleyball Federation (KVF) League season serves off today in  Kapsabet with 26 teams expected to battle it for top honours.

The event is expected to feature 10 women and 16 men's teams but so far,  only half the team in both genders has authenticated their availability as of Thursday morning, according to KVF organising secretary, Ismael Chege.

Chege said they intend to announce the fixtures on the ground as opposed to the norm where the schedule was released earlier.

"The distraction is brought about by the limited number of teams that have confirmed participation in the first leg. Some teams are yet to submit their registration forms, forcing us to craft the fixtures on the matchday contrary to the past," Chege said.

"Clubs are dragging themselves and some teams could still withdraw from the opening matches. We crafted the tentative fixtures during a meeting with team managers on November 6 but can't rely on that in the current situation."

He continued: "A team can skip the first leg and be eligible for the second and subsequent legs but beyond that, it will be virtually impossible to participate in a league season."

At the same time, he hinted that more teams are expected to join the league in an expansive format aimed at enhancing competition. The men's version had 13 teams while the women boasted eight last season.

Three and two more  in the men and women categories respectively joined the league during the TM's meeting but the number should rise again if Chege's sentiments are anything to go by.

"For ladies, there are speculations that two more will join but it is subject to confirmation. Should those teams be available, then the women league is likely to have 12 teams. We still have room for as many teams as possible."

The Governor's Cup is set for Saturday and Sunday at the same venue.