• He replaces Antonio Giovinazzi, who has raced for Alfa since 2019 but now has no place on the F1 grid next year.

• “I feel well prepared for the immense challenge of Formula 1, the pinnacle of my sport, alongside a proven, world-class talent in Valtteri Bottas.” 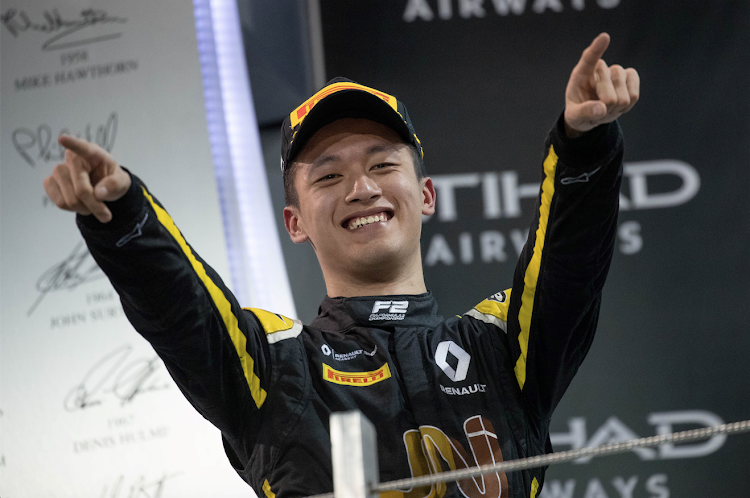 Alfa Romeo described the Formula 2 frontrunner as a “trailblazer who will write a pivotal page in his country’s motorsport history”.

He replaces Antonio Giovinazzi, who has raced for Alfa since 2019 but now has no place on the F1 grid next year.

Zhou, who is second in the F2 championship with three wins this season and two rounds still to go next month, said: “I dreamt from a young age of climbing as high as I can in a sport that I am passionate about and now the dream has come true.

“I feel well prepared for the immense challenge of Formula 1, the pinnacle of my sport, alongside a proven, world-class talent in Valtteri Bottas.”

The move means all F1 teams have confirmed driver line-ups for 2022. Zhou was part of the Ferrari driver academy from 2014-18, and moved to join Renault’s young driver stable in 2019. He has been test driver for the French company’s F1 team for the past two years.

He will take with him to Alfa Romeo a sizeable financial package said to be worth many millions of pounds. Team principal Frederic Vasseur admitted in an exclusive interview with BBC Sport that this was a factor in signing Zhou, saying: “The financial side can’t be hidden.”

But he said that Zhou’s talent had also been a key consideration. Vasseur pointed to his F2 victories in Bahrain and Silverstone this year as evidence that he “has the ability” to compete at the highest level.

“I don’t know if in the end he will be a champion or not in F2,” Vasseur said. “But this won’t change the potential that he is a frontrunner against some other very experienced guys. He also has the advantage that he was able to do some test days this season in F1 so he is not with zero mileage.”

Vasseur, who previously ran the successful ART team in the junior categories, said he had been watching Zhou’s progress for some years.

“For China, it makes no sense to bring someone if the guy is nowhere [on performance]. They want to be successful,” Vasseur said. “When he was at the beginning of the story in F3, we said: ‘Perhaps this one is a potential [F1 driver].’ And then he won some races in F3 Euroseries before moving to F2, and he did well.

“The most important thing for me is that he is a clever guy because he is always improving from year to year, always doing a better job and putting everything together.”

Vasseur said the extra income Zhou brings to Alfa Romeo would mean that the team would be able to operate at F1’s cost cap next season ­— their budget is “massively” under the $145m (£114m) figure this year, he said.

“In the end, our sponsors also want to be happy and develop their commitment to the future, and the financial side can’t be hidden,” Vasseur said.

“The first Chinese driver in F1 — it’s mega news for us, for the company, for our sponsors and also for F1 in general. A team has to become sustainable at one stage. It is not just about the Chinese sponsors, it is about the exposure we will give to our current partners.

“F1 today is a bit tough. If you are not in the top two plus Ferrari, the exposure is very low and this is probably the best way we will have to move up the classification of exposure.”

Bottas was signed in early September, after Mercedes decided to sign George Russell as Lewis Hamilton’s team-mate for next season. Vasseur said conversations with the Finn, who drove for the Frenchman in the junior categories before making his F1 debut with Williams in 2013, began at the start of this season.

“We always kept a very good relationship, and very early into the season we were in the same hotel and we discussed it together one evening,” said Vasseur. “I said: ‘OK, if one day you are looking for a team, Valtteri, I will be there.’

“We started the discussion like this and moved forward step by step. We have a strong personal relationship and I knew he was in a tough situation. OK, Mercedes is probably the best team on the grid and to be part of the team is the dream of 18 drivers on the grid today.

“But it was not an easy situation and he was trying for the next stage [of his career] to be central to a project and it was what we discussed from the beginning.

“We said: ‘OK, if we want to improve as a team, we need to develop the project around a driver.’ It was always the case with the successful stories - with [Sebastian] Vettel at Red Bull or [Fernando] Alonso at Renault or [Michael] Schumacher at Ferrari or Lewis [Hamilton] — to try to build something up around someone and that was the project with Valtteri.”

Vasseur said Bottas’ status as a leading driver would give the team a benchmark as F1 heads into a major regulation change this winter, with new cars aimed at closing up the grid and making the racing more competitive.

Alfa Romeo are ninth of 10 teams in the constructors’ championship with three races to go, but their performance has varied wildly from race to race — Giovinazzi qualified seventh and 10th in the Netherlands and Italy in early September, for example, but was 18th on the grid in the next two races in Russia and Turkey.

Vasseur said he “won’t blame the drivers more than anything else” for the team’s inconsistent performance.

He emphasised that the midfield pack is close in terms of performance, so small details, whether they be driver errors, team errors, or other factors, can make a big difference. He also pointed out that Alfa Romeo had not put any new parts on the car since the third or fourth race of the season, that their Ferrari engine has a performance shortfall compared to the rival power-units from Mercedes, Honda and Renault, and that unlike all their rivals Alfa have not incurred any penalties for using more than the permitted number of engines.

Alfa have not benefited from the more powerful hybrid system Ferrari introduced for the final third of the season because they are continuing to use the engine in the specification in which it started the year.

“We took a decision one year ago,” Vasseur said. “I think it is a good decision for the future. It was tough for 2021 because we knew that if you don’t develop during the season you are almost dead. But this put pressure on the team, on track operations, and I think they did well.”