England's slim hopes of saving the match hinged on their captain Joe Root but opposite captain Kohli made an inspired bowling change to get rid of his counterpart.

•Openers Haseeb Hameed and Rory Burns responded with a century partnership but England unravelled after lunch on the final day, losing six wickets for 52 runs

•Rest of the English bowling, particularly James Anderson, looked jaded with the workload 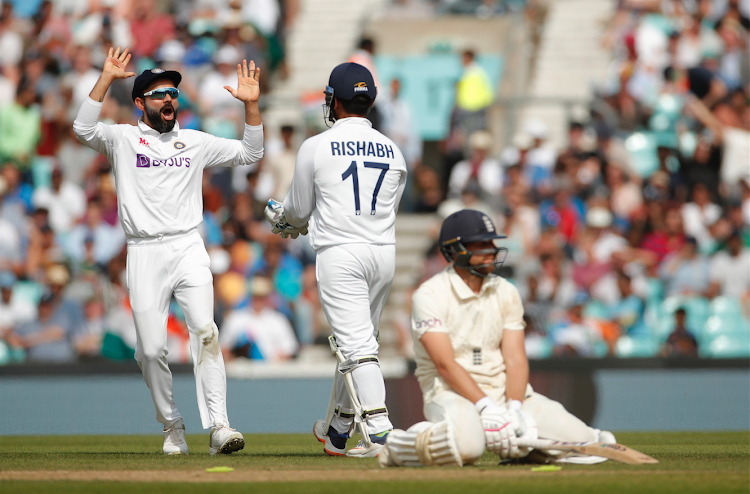 India's world class attack produced a bowling masterclass on a flat deck at The Oval on Monday to secure a memorable 157-run victory in the fourth test against England.

The tourists were on the back foot after conceding a 99-run first innings lead but made amends in the second innings when the pitch got increasingly easy to bat on.

They racked up a series-high 466 in their second outing to set England 368, a daunting target even on such a flat pitch.

Openers Haseeb Hameed and Rory Burns responded with a century partnership but England unravelled after lunch on the final day, losing six wickets for 52 runs.

Jasprit Bumrah lit up that session with what former England captain Michael Vaughan called "spell of the summer by an absolute country mile."

On a pitch that offered little for the seamers, Bumrah generated reverse swing with the old ball to trouble the batsmen.

The 27-year-old breached Ollie Pope's defence and, in his next over, clean bowled Jonny Bairstow for a duck with a searing, in-swinging yorker.

That 6-3-6-2 spell by the seamer with an unorthodox action made sure England's collapse was just a matter of time.

India captain Virat Kohli later said they wanted to get the most out of the old ball on an unresponsive pitch.

"The ball got scuffed up quite nicely and then we managed to make one side heavier," Kohli explained.

"Our guys, when the ball's reversing enough, they become much more lethal and we exploited reverse swing perfectly today."

If Bumrah effectively took the pitch out of the equation, Jadeja made the most of it.

The left-arm spinner kept tossing the ball into the rough and spun one past Hameed's bat and onto his off-stump.

He subsequently landed one more delivery on those footmarks to get Moeen Ali caught at short leg for a duck.

England's slim hopes of saving the match hinged on their captain Joe Root but Kohli made an inspired bowling change to get rid of his counterpart.

Root had been watching wickets tumbling at the other end, and he joined that procession after dragging an innocuous Shardul Thakur delivery onto his stumps and departed for 36.

Umesh Yadav claimed three wickets, including of Chris Woakes, who made strong impression in his return to the English test side after 12 months.

Woakes was the pick of the English bowlers in both the Indian innings and also made a breezy 50 in the first innings.

Rest of the English bowling, particularly James Anderson, looked jaded with the workload.

Root was looking forward to welcome a fit-again Mark Wood in the fifth and final test beginning at Old Trafford on Friday.

"One big push for the guys that they go out there and play next week at Old Trafford, but their efforts and their skill levels have been very high so I'm really proud of those guys."