Elfyn’s car spun in the next corner and with the damage clear, Evans reversed the car off the road, his day over.

• Navigated by Scott Martin, Elfyn hit a rock on the inside of a fast right bend thus shattering the front right wheel and suspension on his Yaris. 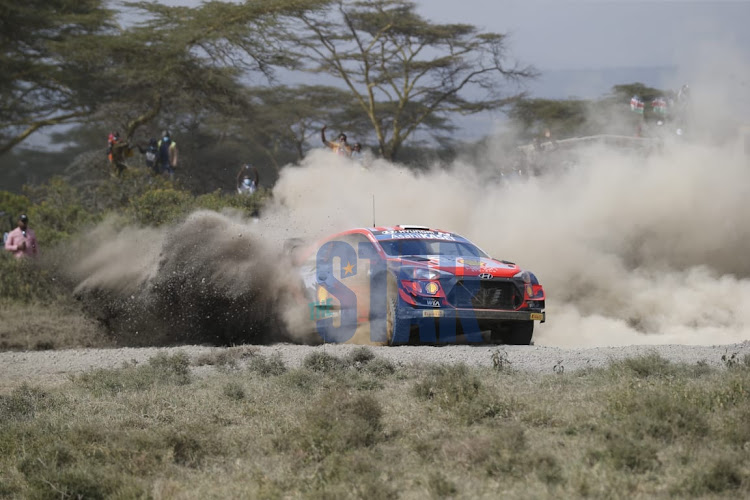 The Toyota Gazoo Racing driver exited the iconic Kenyan event 300 metres to the end of the volcanic ash soil stage.

Navigated by Scott Martin, Elfyn hit a rock on the inside of a fast right bend thus shattering the front right wheel and suspension on his Yaris. 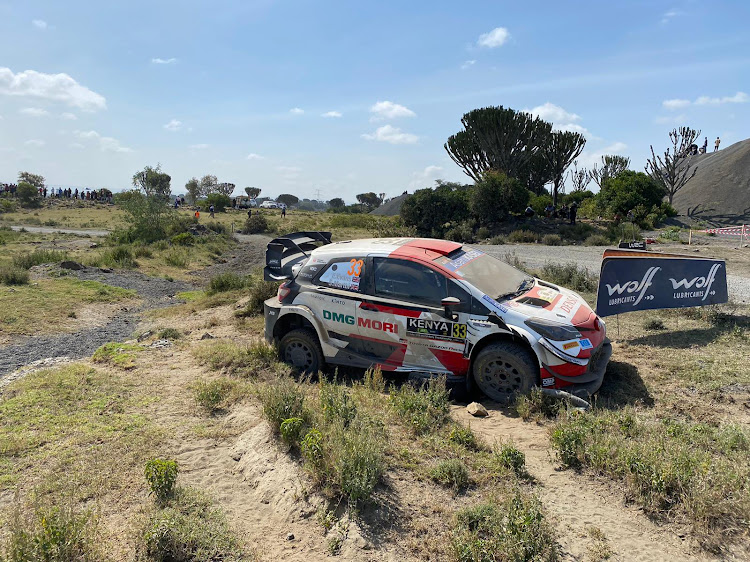 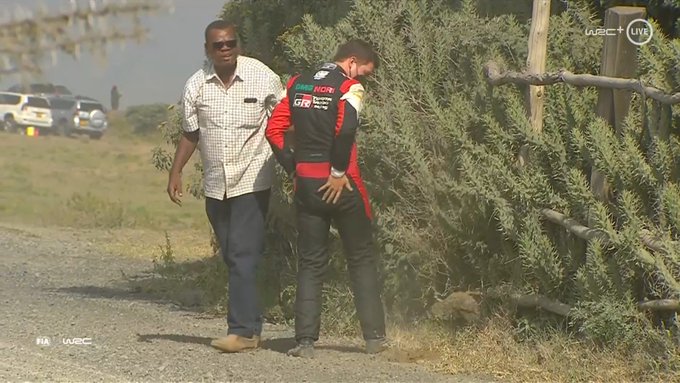 Elfyn Evans takes a look at the rock on SS3 that ended his participation on Friday at the WRC Safari Rally Kenya.
Image: RALLYING UK/TWITTER

Elfyn’s car spun in the next corner and with the damage clear, Evans reversed the car off the road, his day over.

He was less than 4km from the finish when he oversteered sideways off the stage and ploughed through the vegetation before coming to rest in a ditch.

An early finish for us today. Clipped a rock and broken the front right suspension. A huge shame not to experience today’s stages @wrcsafarirally @TGR_WRC pic.twitter.com/V3EPX257yI

Sordo and co-driver Borja Rozada managed to get their i20 back to the side of the road but sadly joined Elfyn in the list of big-name casualties.

“Not so much speed actually. It was very slippery and sandy. Absolutely no grip. We had

to make it through.”

“Very slippery and very narrow and difficult to see with dust on the screen.”

“This is something. The ruts were much deeper than on the recce. I struggled a bit with

the understeer. The road is so narrow and it is so difficult to find the right line. I tried to

optimise the traction but it was not an easy stage to start with.”

“It’s tricky. The washer is on all the time with the dust.”

“It’s really difficult. I have not driven in that type of stage before. I had no grip at all in

these really narrow places. You just try and get through it.”

Stalled in a corner. “I don’t know why. I used the clutch and immediately the engine did

not have power and I had no power and the engine stopped. There’s a long way to go. It’s

“For me, it felt so rough already. It’s better to be at the front, for sure. Need to do some

work to get the car to turn a bit better.

“It’s really slippery, to be honest. Much more than we expected. To protect the car you also

need a stiff set-up. But I think we are too stiff. No grip. We were short in-service time, but the guys did a good job. All is okay...!”

“It was a bank after a dip (impact registered on an FIA sensor). It was a very difficult

stage. Much worse than I expected.” The car is reportedly crabbing quite badly away from the stop control.

“I think it was an adventure, so slippery. The ruts were so deep, so we just went through.”