My best is yet to come, says hat trick hero Bwire

• Scoring a hat-trick never crossed my mind at the first whistle but sounding the board thrice was a proud moment in my playing career," said Bwire.

• Bwire said she felt no pressure to deliver at the grandest stage adding that she always believed in her talent. 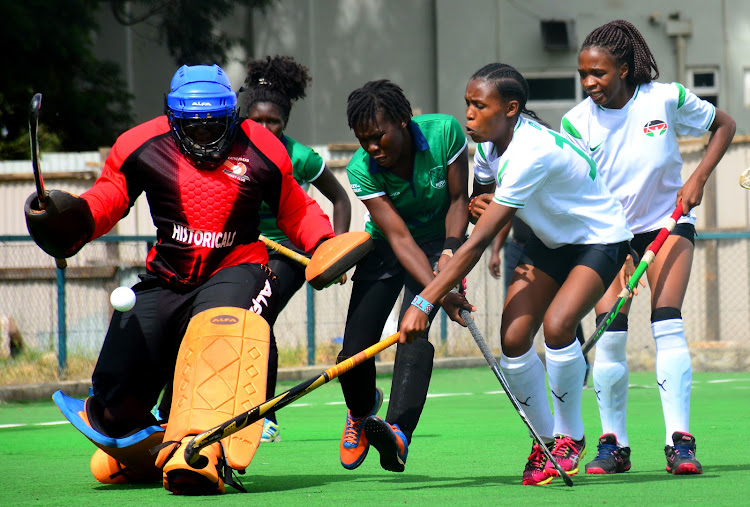 National under-21 striker Grace Bwire has vowed to work harder and retain her spot in the senior side after opening her account with a hat-trick against Uganda last Thursday.

It was no mean feat for the 19-year old Multimedia University player, who was the player of the match as Kenyans humiliated their neighbours 11-0 at Dashmesh (Sikh Union) Hockey Stadium, Nairobi.

Bwire said it was not the time to celebrate but promised to improve on specific aspects of her game to become a better player in order to maintain her status at the side. Multimedia University are in the Super League.

"It was a dream debut for me. Scoring a hat-trick never crossed my mind at the first whistle but sounding the board thrice was a proud moment in my playing career. It is the dream of every player to play for the national team and I am happy I took my chance," said Bwire.

"I am still growing and therefore I have to improve my baseline runs and reception. I am not badly off but I feel I can give more in those areas. I also have to be bold and tackle defenders and work on my positioning in the D. A good forward should be in front of defenders not at their back and that is my focus."

Bwire said she felt no pressure to deliver at the grandest stage adding that she always believed in her talent.

"I took it like any other match and my focus was to show the coach what I can offer," she added.

At the same time, the former Tartar Girls player is open to representing Kenya at  Africa Junior Cup slated for Accra, Ghana later in the year.

"I have an unfinished business with the U-21 team but I am open to all options. My target is to learn and improve all the time and whenever I am called to play at any level, I have to be ready," she added.

Kenya demolished Uganda 6-0 on Saturday but Bwire, who is also keeping her options open with regards to her next move, was not lucky with the board after coming on as a second-half substitute.

She hinted that discussions are ongoing to have her join Masinde Muliro University on a full sports scholarship and would prefer to play for women Premier League side Lakers.