Wingback Sakari revels in swimming in the deep end at Sharks

•Daniel Sakari's parents were against his interest in football and wanted him to concentrate on academics.

·Sakari graduated with an undergraduate degree in statistics and pure mathematics.

•However, he has fully dabbled in professional football having played for Green Commandos, Kakamega Homeboyz and Kariobangi Sharks thus far. 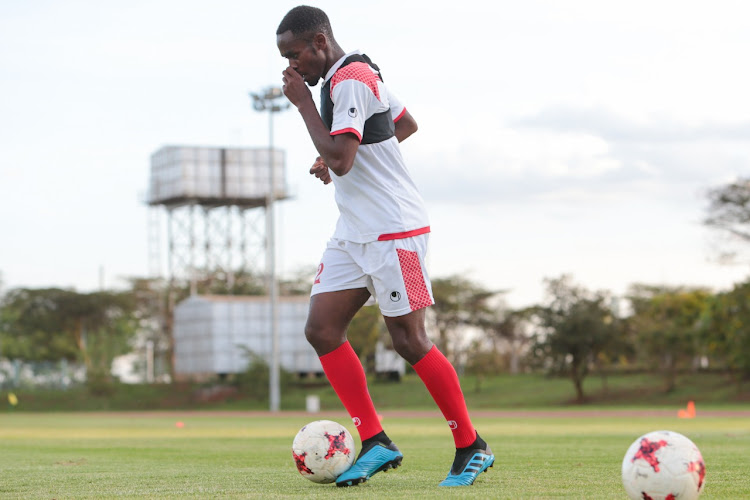 Daniel Sakari in a past training session with Harambee Stars.
Image: COURTESY

After approximately nine months of inactivity, the 2020/21 Kenyan Premier League kicked off to a flier last weekend.

The highlight of the weekend was Kariobangi Sharks’ 4-0 walloping of moneybags Wazito FC at Moi Stadium, Kasarani.

Indeed, even the local social media sports pages have exploded with replays capturing the sequence from different angles.

"I really can't explain as it happened so fast. You receive the ball then you get many thoughts of what you have to do. You have like a second to make a decision and execute it," Sakari says.

This is ironic considering that Sakari is a mathematics graduate whose academic speciality is all about precision in matters angles, distance and statistics.

Nevertheless, his rocket strike is symbolic of his fast-rising football career that could never have been were it not for exceptional performance in his KCPE exams.

Sakari was born on January 25, 1999, in Mathare North in Nairobi but spent his formative years growing up in Webuye, Bungoma County.

The last born in a family of three boys and three girls, Sakari never had it easy playing football in his childhood because his parents uncompromisingly laid emphasis on academics. 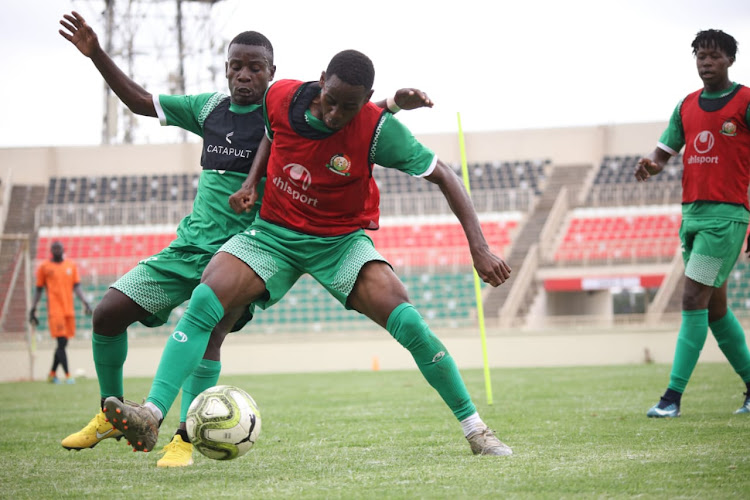 Sakari vies for the ball with David Owino as Mike Kibwage closes in during a training session with the national team.
Image: COURTESY

"My parents couldn't allow it. I only engaged in football as a pastime activity. My parents believed in education,"  Sakari says.

Deep inside him, though, he knew he was cut out for football. He would grab the slightest opportunity at his disposal to participate in the game he so much loved.

"Though I played mostly for leisure and in local tournaments as a kid, I already had a feeling football was a thing for me. I had no idea I could play football professionally," he adds.

His exceptional performance in his KCPE exams at  Milo Central Academy in Webuye secured him a slot at the coveted Maseno School where his football journey kicked off properly.

There, Sakari received organised training in football for the first time under the tutelage of a teacher, Eric Awuonda, who doubled up as the school's football team coach. 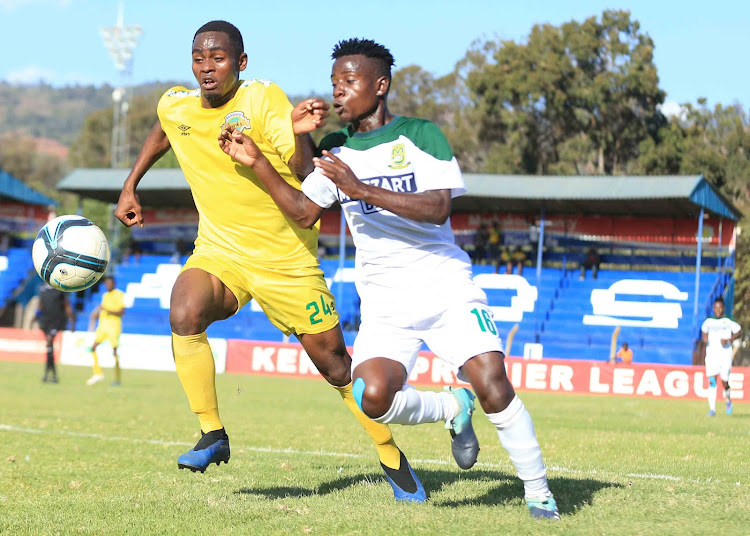 "The current U-12 and U-10 set-up was non-existent in our childhood. We just met at a hospital called Milo Health Centre and formed different teams based on our home areas," he says.

Maseno School, which is more famous for basketball and rugby, has never been known to produce excellent footballers.

In fact, Sakari attained comparatively greater heights with the school's rugby team and was part of the squad that made it to the East African Ball Games in Tanzania.

He sat for his Kenya Certificate of Secondary Education and proceeded to Masinde Muliro University of Science and Technology where he enrolled for a Bachelor's Degree in Mathematics with a bias in statistics and pure mathematics.

By this time, he had already developed a keen interest in football and decided to throw himself in the deep end of club competitions.

"I joined the university team and turned out for them in the Provincial League in 2017 and helped them gain promotion to Second Division with the guidance of coach George Epalaat," he narrates.

In 2018, he went to try out for Kakamega-based National Super League side Green Commandos and his ability convinced the team's tacticians, Brendan Mwinamo and Eliud Omukuya, to absorb him immediately for the season.

His stay at the NSL side was short-lived as Kakamega Homeboyz, then under Paul Nkata, snapped him in the latter part of 2018.

At the western Kenya side, his star continued to shine brighter as Kakamega Homeboyz mixed it up with the big guns of the Kenyan Premier League.

His standout moment was his side's 4-0 thrashing of AFC Leopards at  Bukhungu Stadium in their second match of the season.

In 2019, his educational pursuits landed him in Nairobi and an opportunity to join Kariobangi Sharks came begging. 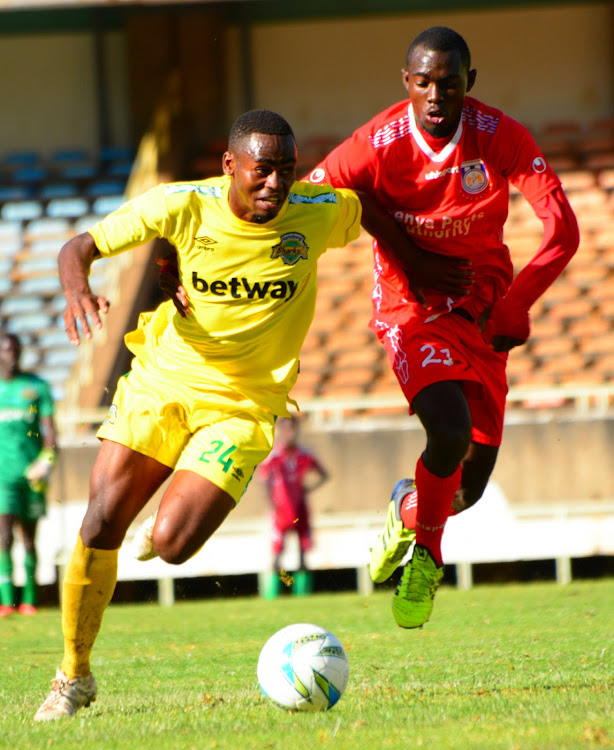 "I had to move back to Nairobi due to education and didn't want to quit football just yet and fortunately enough Sharks had developed an interest in me," he says.

The fleet-footed wingback has earned three senior caps — the first in 2019 when former Harambee Stars coach Francis Kimanzi summoned him for national duty ahead of Kenya's double-header against Egypt and Togo in the AFCON qualifiers. 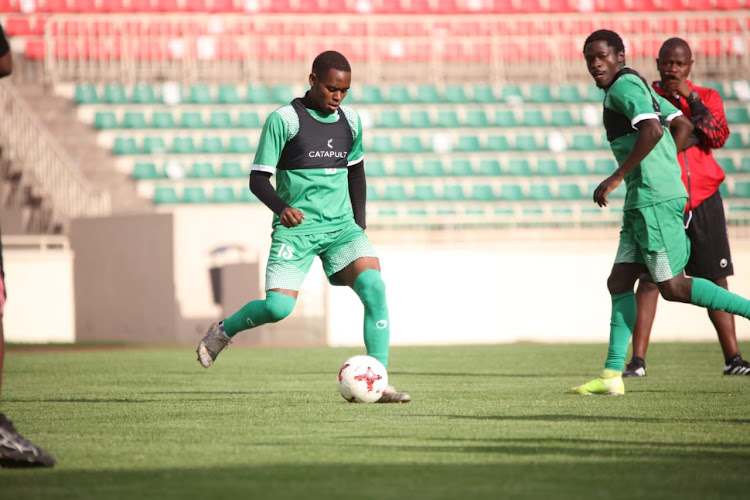 Sakari attempts to pass the ball past Lawrence Juma in a training session with the national football team, Harambee Stars.
Image: COURTESY

Kimanzi again included him in the Harambee Stars squad that challenged for the 2019 Cecafa Senior Challenge Cup in Uganda.

He was also an unused substitute in Stars' recent AFCON qualifier double-header against Comoros in Nairobi and Moroni — a testament of newly appointed tactician Mulee's faith in him.

"Cecafa was the best moment because I earned some playing time. I can't, however, forget how we suffered a humiliating 4-1 defeat in the hands of Eritrea in the semis. My best international assignment was against Tanzania whom we beat both home and away, " he recalls.

After Sunday's positive start to the season, Sakari and the Sharks are now training their eyes on their maiden league title.

"We would like to play in CAF Champions League next season. Personally, I would like to help the team achieve that. I have to continue working hard and provide assists and score goals," he says.

Shikanda is currently the assistant coach at Tanzanian side Azam FC.

Internationally, Sakari is an admirer of former Barcelona and Brazilian right-back Dani Alves.

His ultimate goal is to one day follow in Alves' footsteps in the Spanish La Liga by playing for current leaders Real Sociedad.

He spends his free time reading novels, writing articles for fun as well as watching movies and football highlights.

Seeing his successes on the pitch, Sakari's parents —  Julius Masibo and Catherine Mwenje — have now become his number one fans and strongest pillar of support.

To aspiring footballers, he prescribes passion and discipline as the key ingredients to a successful career in the game.

"It's all about self-belief. Once you have the passion to drive you, all will be well. There may be excruciating challenges but they are there to strengthen us and prepare us for the next phase," he says.

"Keep yourself in prayers and God will never let you down. God's time is always the best."