•Since the first case of coronavirus was reported in the country in March, the government suspended public and sporting gatherings and consequently local action was adjourned.

•The committee will be headed by Chief Administrative Secretary at the ministry Hassan Noor Hassan and is composed of stakeholders from various government department, federations and the media among others 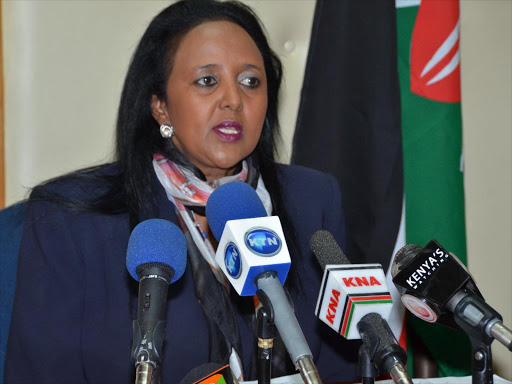 There could be light at the end of the tunnel after Sports Cabinet Secretary Amina Mohamed appointed an 18-man advisory committee to review the possibility of resuming sporting activities.

Since the first case of coronavirus was reported in the country in March, the government suspended public and sporting gatherings and consequently local action was adjourned.

Further, athletes who were gearing up for international assignments as a team or individually,  were also dealt a blow after the government impeded their travel and later banned international passenger flights.

The committee will be headed by Chief Administrative Secretary at the Ministry Sports, Hassan Noor Hassan and will comprise stakeholders from various government department, federations and the media among others

The committee is expected to engage sports federations with an aim of gathering their views, regarding the reopening sports and explore the possibility of taking that route.

The members are also expected to recommend protocols to be employed prior to the much-awaited resumption as well as review the existing global trends from the countries which have allowed sporting activities to proceed albeit without fans.

In April, Fifa gave a list of stringent health measures to be implemented before restarting hence football interests and demands will be gathered and presented by long serving Harambee Stars and Tusker doctor Wycliffe Makanga.

Barnaba Korir is set to take care of athletics interests on behalf of the committee. Korir serves as Athletics Kenya Nairobi Region chairman as well as youth development chairman at the federation.

With the 2020 Olympics pushed to next year and preparations put on hold, Nock's secretary general, Francis Mutuku, is set to advice the ministry on the effects brought by the virus while veteran sports editor Elias Makori will take care of the journalists interest.

Acting CEO at the Kenya Academy of Sports Doreen Odhiambo, Kenya National Paralympics Committee  president Agnes Oluoch and Sports Commissioner Gerald Gitonga are also in the committee which will provide their report on July 10.