'BERLIN WALL' IS THE REASON BEHIND BUTALI'S RISE

Wakhura continues to pose a challenge for the opposing teams

He is a former captain of Strathmore and played a similar role at St. Anthony’s Kitale as a student.

•In 2013, he graduated to the senior national team as Kenya hosted qualifiers for the World Cup. 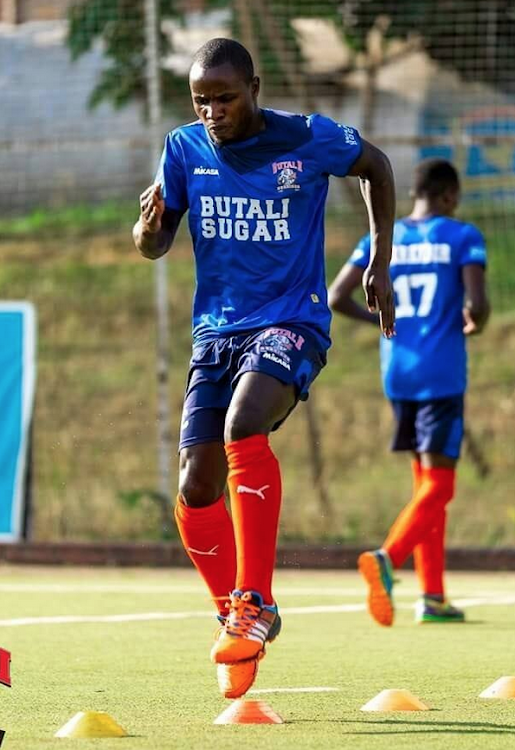 If you want to find the reason behind Butali’s tremendous performance in the last two seasons, then look no further than Constant Wakhura.

Nicknamed the ‘Berlin Wall’ or sometimes  “The Monster’ because of his ability to muscle opposing forwards off the ball, Wakhura is a dominant figure in the ‘D’ area.

The no-nonsense player is a solid and reliable defender. He has been formidable for Butali over the last three seasons and he is no doubt a darling of the crowds.

No one should underestimate the influence of the experienced captain both at club and the national team level. He is a former captain of Strathmore and played a similar role at St. Anthony’s Kitale as a student.

The leader... the fighter...the hero....all in one, has always left a mark wherever he has spent time playing. Even the league’s respected forwards will tell you for free that he is a nightmare to come up against because most likely you will only manage half a chance or be reduced to a passenger on the field.

His first assignment as the national Under-21 captain was in 2012 during the World Cup qualifiers in Johannesburg. In 2013, he graduated to the senior national team as Kenya hosted qualifiers for the World Cup. He has been an assistant captain twice— 2015 and 2016. Three years later, he led Kenya team to the Olympic qualifiers in South Africa, where Kenya finished fifth in the six-nation team tournament.

Wakhura was the reason why Butali stamped their authority all season. He, alongside his predecessor Kenneth Nyongesa, formed a perfect partnership at the heart of the sugar miller’s backline.

If as a captain, your team is scoring goals and getting points, you are a hero but if you are conceding more and scoring less especially for a defensive captain, then all eyes will be on you.

Wakhura demonstrated his class as a lynchpin and a goal-scorer too to simply underline the role he played in Butali’s Premier League title win, albeit unbeaten.

Butali also conceded the fewest goals. For all the good work the teams did, they simply had no answer to Butali as they were ripped apart at regular intervals.

Leaders aren’t born, they are made. And just like anything else, they are made through hard work. That was the prize Wakhura paid to be appointment captain at St. Anthony’s Boys High School-Kitale while in Form Two. Age was not a factor in his elevation because his performance was reminiscent of a cool-headed and hardened player whose maturity was evident in his executions.  This was a real test for the athlete who manned the post  while in Form One.

“I joined hockey team while in Form One as a goalkeeper. In 2008, we were runner up as Friends School Kamusinga were crowned national champions at the national school games. We, however, regained our pride by winning the East Africa Games version in Kigali, Rwanda and for me It was lovely to be the leader of the winning troop,” a reserved Wakhura posed.

His appointment as the captain despite having senior figures in the team would have raised eyebrows but it signified the kind of a player he was.

He had all the qualities of a leader and the fact that he later made great strides in his career after being scouted at the nationals and regional games did not surprise many.

The offer to join bitter rivals Friend School Kamusinga, another hockey powerhouse in East Africa, was hard to turn down and his dream move was actualised the following year. Throughout his time in high school, national and regional honours was a fight between FSK and St.Anthony.

“I joined FSK in 2009. St.Antony won the national in Kangaru while FSK finished second. In 2010 we lost again to Musingu who were the surprise package at the provincials. It was unbelievable to see St. Anthony sweep both the nationals and East Africa trophies in 2011,” he reminisces.

Little was known of him but Strathmore knew roughly what they were getting when they snapped up his signature in 2012. Gladiators had seen the likes of Nyongesa flourish and leave but Wakhura was another masterstroke.

The likes of Francis Kariuki and Festus Onyango played huge parts in Strathmore’s most unlikely title wins in 2016, but without Wakhura, none of it would have been possible. He said the Strathmore chance was the real deal for him at the time because it was the university of choice in matters sports and academics.

“When I was in FSK, I heard  about Maxwell Fuchaka, Frank and Davis Wanangwe, Esikuri Francis and others who were in strathmore that time. This was a motivation for me and also evident that the institution is a powerful giant in academics and sports.”

Gladiators coach Meshack Senge installed him as the assistant captain in 2013 before finally naming him captain in 2014 and 2015. While in his final year in the institution in 2016, he passed on the leadership mantle to the now Butali team-mate Kariuki.

On his association with the students, he said: “It was a great experience because they supported me and we worked as a unit. They were ready to learn and work towards achieving a common goal. 2013 was also the time I joined the national team and I earned the respect of the boys.”

He added; “Strathmore was great and I still support them to date. They made me who I am today. I was given the scholarship and everyone got on well with me to make sure my life was smooth. I thank the old boys and coach Senge for financial support towards my school fees. They made sure my arrears were cleared on time. 2015 and 2016 were my standout years as a player with Gladiators because I had a lot of experience and I was a regular in the national team.”

‘A charismatic leader is one who establishes a strong foundation before he leaves while leadership is lifting a person’s vision to high standards’.

This was depicted when Wakhura opted to mentor a new skipper in Kariuki in 2016. This was also his last year with the students and he wanted to leave the team at the right place.

“You know leadership is about mentoring others. It was my time to see someone come through the ranks and take my place. I really achieved it as ‘Karis’ was equal to the task and there was no greater parting gift than lifting the league title the same year. This victory was special because I had not won any league title and I remember Ken Nyongesa telling me not to leave Strath until I win something,” he said.

Then came the opportunity to firm up his position in Kenyan hockey as Kamal Sembi-led Butali beat a host of admirers to sign him in December 2016.

Luckily, he met familiar faces in Butali’s dressing room and quickly adjusted to his new environment. The hunger to compete against the big boys informed his decision to make the move  to Butali.

“Strathmore is like an academy for Butali. Over the years, alot of players from Strathmore have passed through Butali. Their style of play is similar to ours hence perfectly fits into the team,” he said while explaining the relationship between Butali and Strathmore.

He is crucial inside the dressing room and conjures splendour on the pitch. Wakhura is one of the most consistent players in Kenyan hockey and very focused.

A change of guard at Butali early this year saw the title-winning coach Denis Owoka being replaced by Godfrey Wakachunga. Veteran Player Zack Aura was also elevated to a coach, prompting the team to name Wakhura as the new captain hence replacing the long-serving Nyongesa.

“Of the four appointments, this one came as a surprise because it wasn’t something I expected. However, you know responsibility gravitates to the person who can shoulder them on,” he said.

Wakhura’s task this season will be to safeguard the team’s unbeaten run, retain the league title and hopefully, attend the African Cup of Club Championship ACCC in Malawi later this year.

On how different club leadership is from the national team, he said: “In club hockey, you are dealing with people you know and you understand them well because you train with them almost daily. You rarely meet some of the players in the national team unless there’s an assignment and this makes it difficult to understand this group of players”

Wakhura comes from a humble background and has always reiterated that his life is a miracle.

“I come from a humble origin and I work hard to ensure my family back home gets something. So whatever happens to me is God’s plan and sometimes, I’m surprised what is going on in my life. I never knew I will lead Butali.”

Wakhura works with Down To Earth Technologies Limited, an IT firm in Nairobi. His style of play mirrors his off-field personality.

He has, bizarrely, become a cult hero as a direct result of his shy and retiring nature while his lack of ego makes him a perfect teammate. Nyongesa, who passed the armband to Wakhura, once described the maestro as the most a ‘complete defender’ Kenya and Butali can rely on.

The player has had to work for everything he has achieved and his attitude hasn’t changed, even though he has been one of the best in the league for the last three years. He has perfect traits of a defender — a no-frills position that rarely gets recognition and the applause it deserves. Where others play with a selfish streak for personal gain perhaps at the expense of their team, Wakhura doesn’t seek adulation.

The fact it comes anyway is a testament to how effective he is because he never tries to stand out. If Wakhura was any different as human, he simply wouldn’t be as good as a hockey player.