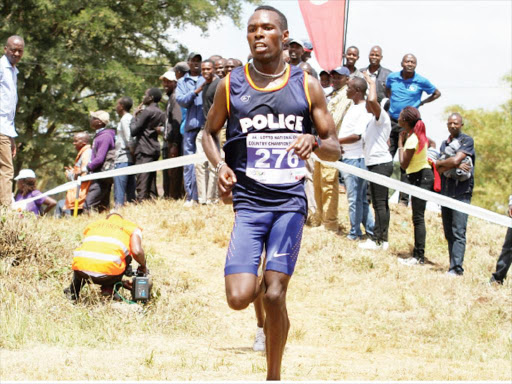 World half marathon silver medalist Bedan Karoki has pulled out of the national team to the World Cross Country Championships set for Kampala, Uganda next month.

Karoki, the world cross silver medalist, was named in the 28-man strong Kenyan team after finishing second at the AK/Lotto national trials held on Saturday at Uhuru Gardens, but he is not keen to make the short trip to the neigbouring capital.

Instead, the decorated all-weather runner said his participation at the national cross was meant to prepare him for his marathon debut at the London Marathon on April 27. “I am still not interested in going to Kampala since my focus is on London Marathon,” said the Japan-based runner and the national champion two years ago.

“I have already talked about this to some of the team officials but will visit Riadha House sometime this week to make my request official,” he added.

However, Athletics Kenya (AK) vice president in charge of competitions, Paul Mutwii, indicated that Karoki is well within their plans unless he officially pulls out.

“He was named in the team and if he really wants to pull out, we expect him to make it official. In case he does, we are going to find a replacement in the seventh-placed runner since we want to keep our word on rewarding the top runners at the trials.”

He added that Karoki could be the only pull out from the team as they want to send the country’s top medal prospects to Uganda as per the trials. Meanwhile, national cross country team head coach Wycliffe Ndiwa believes team work will be key if the country is to surpass the medal capture from Guiyang last time out.

A first timer in all levels of the national team, Ndiwa said: “My focus is to embrace team work at all levels, starting from the team management to the athletes.”

“It is like when you go to war, you must go with one mission.”

He observed that being in the team for the first time doesn’t mean he is short of experience, instead, it is his time that had not come and he believes he is there by merit. “I have not been with the national team but I have handled top runners including Leonard Komon and Bahrain-based Abraham Cheroben,” said Ndiwa.

Komon, who also made the team to Kampala, is the 10km and 15km world record holder while Cheroben placed 10th in 10,000m at the 2016 Rio Olympics, while running for his adopted nation.

“I know the task at hand is tough but nobody goes to war to lose,” added Eldoret-based Ndiwa. Kenya finished second to Ethiopia with three gold medals against the victors’ five but Ndiwa feels this will be a different ball game altogether. “I have been been to all the cross country series and I can assure you these are among the best in the country going by the level of competition exhibited,” he said.

In addition, he said, Kenyans will most likely be ‘competing against themselves’ owing to the number of athletes representing adopted countries in Uganda including Bahrain, Qatar, United States and Turkey.