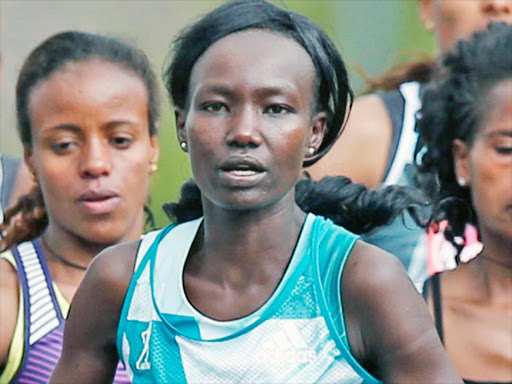 Kenya’s Mary Keitany in action during the women’s London Marathon in April this year. /PIC-CENTRE

New York City Marathon champion Mary Keitany will be seeking to bag a hat-trick of titles during the 2016 race set for November 6.

Keitany won the 2014 and 2015 editions and will be in a special class of treble winners alongside Great Britain’s Paula Radcliffe (three times) and Norway’s Grete Waitz (nine times) if she takes the honours next Sunday. Tegla Loroupe (1994,1995) is the highest ranked winner from the event.

“I have been preparing all this time with a view of defending my title in New York. The training has been good and I feel ready for it,” said Keitany, a former world half marathon record holder.

She will not be leaving anything to chance in her quest for the victory. She, however, acknowledged the hard course.

“The course is always hard and my target is victory. If conditions will be favourable, then I will target time but it is hard to post faster time there,” she said. “The field will be tough but as always, the best will carry the day and for me, I will do my best.”

Keitany, who tops the time field with 2:18.37, will be facing Aselefech Mergia of Ethiopia, who finished behind her last year. 2014 IAAF World Half Marathon champion Gladys Cherono and Joyce Chepkurui are also among the top five in the list of elite runners.

Cherono’s 2:19.25 clocked at the 2015 Berlin Marathon ranked her as the seventh fastest woman marathoner of all-time while Chepkurui, who finished third at this year’s Boston Marathon, will be making her debut in New York City Marathon.

Keitany will be making her fifth appearance in the race following her debut in 2010, finishing third and replicating that performance the following year.

Meanwhile, 2001 and 2003 winner Margaret Oyako is among New York City Marathon icons who will make up the NYRR Hall of Fame Class of 2016.