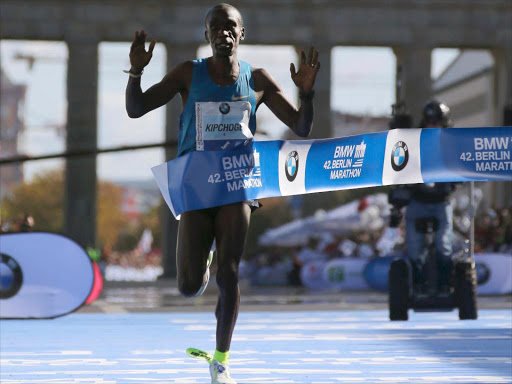 Kenya’s men marathon team is ready to rumble in Rio and bring back a second Olympic gold medal.

The late Samuel Wanjiru is the only Kenyan men marathoner to have won an Olympic marathon gold from the 2008 Beijing Olympics.

Yesterday the team wound up part of their training session after doing a 16km run in the rugged, green area of Moiben in Uasin Gishu.

“This was the last hard session of our training and I can say that the preparations have been going on well. We are ready to perform well in the Rio Olympics,” London marathon winner Eliud Kipchoge said.

Kipchoge who missed a wolrd marathon record by a whisker at the London marathon is tipped to reclaim the title from the Uganda’s Stephen Kiprotich who is also his training mate.

“Kenyans should expect good from us and I am hopeful that I am going to perform. Through God’s favour everything is possible and standing tall at the podium will not be by chance but believing in him with hard training,”Kipchoge said.

“I want to ask Kenyans to pray for us as we go and undertake this task ahead of us,” He added.

Kipchoge will be flanked by former Boston marathon winner Wesley Korir and London marathon second finisher Stanley Biwott in the men’s team while London marathon queen Jemimah Sumgong, Visiline Jepkesho and world marathon silver medallist Helah Kiprop are in the women’s category with the teams set to leave for Rio on August 14.

Korir is optimistic that Kenya will bring the two gold medals in both marathon categories.

While saying that the morale is high and the athletes are excited, personally he will be going for the best.

“This is the best training I have ever done in my running career and I am ready to go for the best. Everybody is excited and we are going to bring gold medals,’Korir said.

Korir revealed that they have planned or r a winning strategy and this time they will get it right.

“We have talked about it in length and this year we have to bring gold back home,” He said.