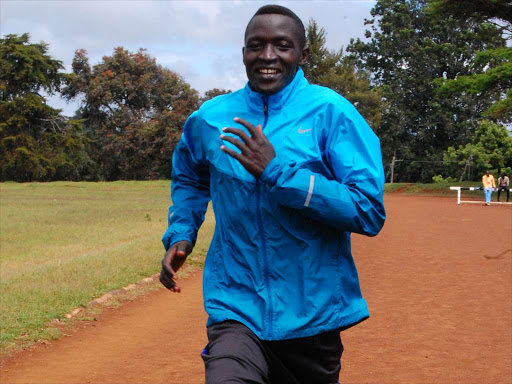 WORLD indoor 1500m bronze medallist Haron Keitany, well known as Asbel Kiprop’s arch-rival for many years, has maintained a low profile due to a hibp injury.

Since getting his bronze medal at the 2010 IAAF world indoor championships in Doha, Qatar, the ‘Land Cruiser’ as Keitany is fondly called, has watched the world move on. But he is now recovered and is itching to get back into action with focus on the Rio Olympic Games.

“I was disturbed by the injury and I maintained a low profile despite competing in some races abroad. The injury is fully healed now and this season, the way I anticipate, will be good,” he said.

“The focus this season is on the Olympics in Brazil and that is why I have started early preparation,” Keitany said while training with Asbel at Kamariny stadium on Tuesday.

Keitany will compete at the IAAF World Challenge on March 5 in Melbourne, Australia.

“I will be testing my endurance there while seeking an impressive time,” he said.

After that he will be using the Samsung Diamond League meetings for further build up ahead of Brazil.

“I will probably start it in Doha (Qatar) and of course our local Athletics Kenya weekend meetings,” he added.

He missed the 2008 Olympic Games despite finishing fourth at the trials but represented Kenya at the 2009 World championships in Berlin, Germany though he did not start his semi-final heat. Keitany has an indoor personal best time of 3:33.96 and outdoor 3:30.20 he clocked in the year 2009.

Post a comment
WATCH: The latest videos from the Star
by STANLEY MAGUT
Sports
08 January 2016 - 06:00
Read The E-Paper