Statistics show the agriculture sector is the leading employer in the EAC countries,

• Despite the monumental wealth, the country has suffered a multitude of crises – conflicts, political tensions, epidemics, undernutrition and food insecurity.

• Currently, one in four people in DRC are experiencing a food crisis, with 5.4 million struggling to survive and on the brink of famine. 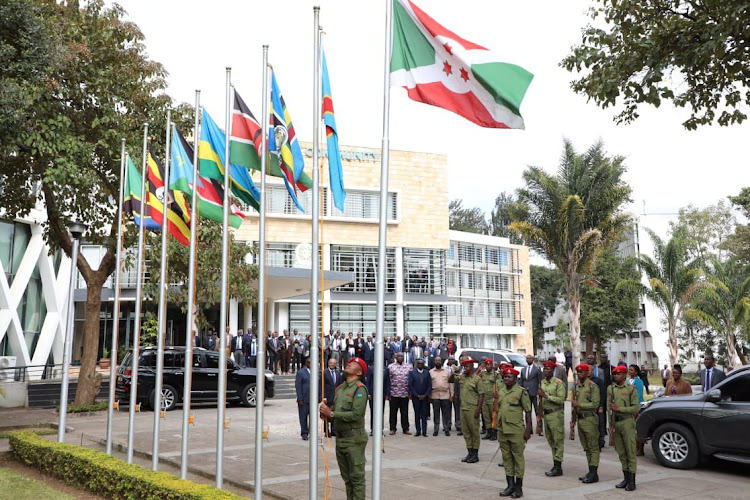 A security official raises DRC's flag at at the EAC headquarters in Arusha, Tanzania
Image: HANDOUT

The formal entry of the DRC into the EAC in July 2022 marked a major turning point in the region’s political, economic and social fortunes, despite the multitude of challenges it faces.

The DRC’s integration as the seventh member after South Sudan in April 2016 makes EAC the largest regional economic development bloc in Africa, with an estimated population of 300 million and a GDP of $305.3 billion.

By joining the EAC, DRC has massively expanded the territory of the trade bloc, connecting the Indian Ocean to the Atlantic Ocean and greatly increasing the numbers of French speakers in what began as a club of former British colonies. However, the big question remains – will DRC joining EAC transform the region’s bleak economic fortunes?

The DRC is Africa’s largest copper producer and has 70 per cent of the world’s coltan, which is critical to mobile phone and computer manufacturing. It is estimated the DRC has $24 trillion worth of untapped mineral resources.

Impeccable sources say the US on December 13 signed deals with the DRC and Zambia (the world’s sixth-largest copper producer and second-largest cobalt producer in Africa) that will see it support the two in developing an electric vehicle value chain.

The financial windfall from the DRC’s mineral deals with the US and China, if professionally managed, could have a far-reaching impact on its EAC membership, particularly in the transformation of the regional bloc’s agricultural and food systems.

Ironically, despite this monumental wealth, the country has suffered a multitude of crises – conflicts, political tensions, epidemics, undernutrition and food insecurity. Currently, one in four people in DRC are experiencing a food crisis, with 5.4 million struggling to survive and on the brink of famine.

The latest EAC members face similar challenges with the other partner states in terms of infrastructure development, insecurity, poverty, underdevelopment, diseases, ignorance and the most pressing – food and nutrition insecurity – that can be best addressed collectively through the regional bloc.

Despite DRC’s profound governance and institutional problems, Foreign Affairs Minister Christophe Lutundula Apala Pen’ Apala was upbeat when he deposited the instrument of ratification with EAC secretary general Peter Mathuki of Kenya at the bloc’s headquarters in Arusha, Tanzania.

“The EAC is the most integrated bloc on the entire African continent,” Apala said, adding that DRC’s entry into the EAC had strengthened the bloc’s economic, political, socio-cultural, financial and military muscle. The latter has been witnessed in the recent deployment of the East African Community Regional Force in eastern DRC.

Retired President and Kenya's peace envoy Uhuru Kenyatta is leading the diplomatic efforts after convening a peace conference of EAC leaders in June 2022 known as the Nairobi Process.

The deployment of the regional force aims at helping combat armed rebel groups and assist humanitarian operations for thousands of people displaced by conflict.

Besides these efforts, the DRC is hoping to work closely with its EAC partners to urgently address its most critical agenda – the biting food crisis facing its population commonly shared with its new partners in the bloc. President Felix Tshisekedi’s administration seeks to tap from the knowledge, lessons learned and successful outcomes of the Community’s programmes on food and nutrition security.

This commitment is based on the awareness that the EAC agriculture, food security and nutrition landscape requires stronger partnerships between government, development organizations and other stakeholders to address the root causes of the devastating food crisis and how to transform the region’s food systems for the benefit of citizens.

The EAC Secretariat works closely with partner states to enhance food security and rational agricultural and livestock practices within the Community, through the harmonization of agricultural policies and joint programmes for efficient and effective production.

Kilimo Trust, a not-for-profit organization, has been engaged with the Secretariat in driving the EAC’s agenda for agriculture and food security alongside local, regional and international partners to promote sustainable, science-based, market-led agricultural development in the region.

Statistics show the agriculture sector is the leading employer in the EAC countries, employing over 70 per cent of the population. Yet it accounts for just 25-40 percent of the GDP across all those economies.

The trust supports smallholder farmers to improve productivity, profitability, competitiveness and commercialisation. Jointly with the EAC Secretariat, it is actively working with international development partners, the private sector and grassroots associates in multiple regions across East Africa.

The work has impacted 548,322 farmers directly and 1.2 million indirectly over the past five years, and a pool of processors and SMEs involving input suppliers and aggregators. Farmers have adopted productivity-enhancing technologies and practices, accessing improved seeds and fertilizer.

These interventions have resulted in 664,254 metric tonnes of commodities worth $284 million traded through structured trade and 2,975 business linkages established across the regional agribusiness value chain.

Started in East Africa in 2005 as a research entity and grant-giving organization to support research that connected science with farmers, Kilimo Trust supported over 50 projects, testing approaches for financing and how to support market access.

“We have leveraged our experience and expertise in value chain transformation and transitioned to a direct implementer to better serve the region’s smallholder farmers and other agricultural value chain actors, helping them become key players in local, national, and regional value chains,” Korutaro explains.

The agriculture sector is the leading employer in EAC countries, employing over 70per cent of the population.

As hunger, famine and inflation continue to ravage the region, the Community bloc, however, remains hesitant in funding agriculture. EAC partner states, in the 2022-23 financial year draft budget, allocated agriculture a paltry $6,750 out of total contributions of $59.3 million.

The EAC’s ministerial Sectoral Council on Agriculture and Food Security attributes this situation partly on reliance on donor funding. Development partners have funded more than 90 percent of the sector’s budget. EAC states must substantially increase their contributions and allocation to the agriculture sector if they hope to resolve the food crisis ravaging citizens in the region.

Working closely with the EAC Secretariat, Kilimo Trust has achieved success in partnerships with international and multilateral funding and implementing partners in Burundi, Kenya, Rwanda, Tanzania and Uganda. It hopes to extend its operations to DRC and South Sudan.

EAC deputy secretary general Christopher Bazivamo is urging partner states to increase funding for the agriculture sector, noting that more than 70 per cent of the industries in the region and over 65 per cent of the traded commodities are agro-based.

Although the sector provides many employment opportunities, the region exports between 400,000 and 700,000 jobs annually and continues to import agricultural commodities and products such as rice and wheat, which can be produced within the region.

EAC partner states still suffer from food and nutrition security challenges and poverty, despite the implementation of National Agriculture Implementation Plans. NAIPs sought to actualize the objectives of the Comprehensive Africa Agriculture Development Programme – the framework for action for agricultural transformation across Africa since 2002.

The EAC Regional Agriculture Investment Plan 2017-25 approved in January 2019, proposes key interventions required for the implementation of the EAC CAADP Compact and the EAC Food Security Action Plan anchored in the Maputo Declaration of 2003 and recommitted in the Malabo Declaration, 2014.

Kilimo Trust has undertaken several successful projects in the region based on inclusive, sustainable, regenerative and climate-smart agriculture and the circular economy.

They include the Competitive Africa Rice Initiative, East Africa project commissioned by USAID through AGRA that concluded last August. “CARI-EA aimed at enabling the inclusive transformation of the region’s rice sub-sector so that locally produced rice in East Africa can competitively substitute the over $300 million worth of rice currently being imported into the East Africa Common Market,” says Kilimo Trust CARI-EA Programme team leader Rachel Ajambo.

The project’s spillover effects influenced the entire three million metric tonnes a year industry of locally produced paddy in the EAC made of 2.7 million smallholder farmers and more than 1,500 SMEs of millers and other value chain actors,” Ajambo says.

Another successful Kilimo Trust venture is the Reduce, Reuse, Recycle Rice initiative for Climate-Smart Agriculture project funded by IKEA Foundation whose two-year pilot ended in July and has now been scaled to a five-year project with a wider scope.

Researchers in the project that has benefitted 5,000 smallholder farmers in Uganda and Kenya aim at making rice farming in East Africa more sustainable by promoting the adoption of innovations such as recycled crop by-products and improving food security in the region.

“The research is generating evidence of developed and tested business models in using products and by-products of rice to drive scaling up the models,” says project leader Anthony Mugambi Makona.

Despite the potential displayed by the agricultural sector to employ youth, many young people are not attracted to the sector. In Rwanda, Kilimo Trust is conducting a five-year project funded by IFAD and BMZ called Rural Youth Employment Opportunities: Support to Integrated Agribusiness Hubs in Rwanda.

The project, which can be replicated in all the EAC partner states, is contributing to sustainable employment and income-generating opportunities for 3,000 Rwandan youth.

“It aims at building integrated agri-business capacities of rural youth and to generate empirical evidence to inform policy to drive scaling up the models to create jobs for the youth,” says R-YES project leader Andrew Gashayija.

Agriculture is the mainstay of the economies of the EAC partner states that its latest entrants – DRC and South Sudan – have joined.

Whether DRC’s enormous natural and mineral resources influence will have a lasting impact on the bloc’s social and economic fortunes, especially in the much-needed transformation of its agricultural and food systems amid the current food crisis, remains to be seen.

Leny is a consultant writer

Says there is need to strengthen resolve to end terrorism.
News
3 weeks ago

DR Congo's leader hits out at Rwanda over insecurity

"We express solidarity and pray for justice on behalf of all those affected," he said.
News
3 weeks ago

They urged the former President to assist in assuring that there is safety in the country.
News
3 weeks ago
Post a comment
WATCH: The latest videos from the Star
by ALBERTO LENY
Siasa
22 January 2023 - 18:38
Read The E-Paper