In his address to the 77th Session of UNGA, President Hassan called for multilateral efforts in the war on terror

• Since returning to power in June 2022, President Mohamud’s meetings with foreign leaders have always featured talks on collaboration in the war on terrorism.

• This has been the case during his visits to Turkey, Kenya, Eritrea, Djibouti, Egypt, Uganda and Ethiopia. 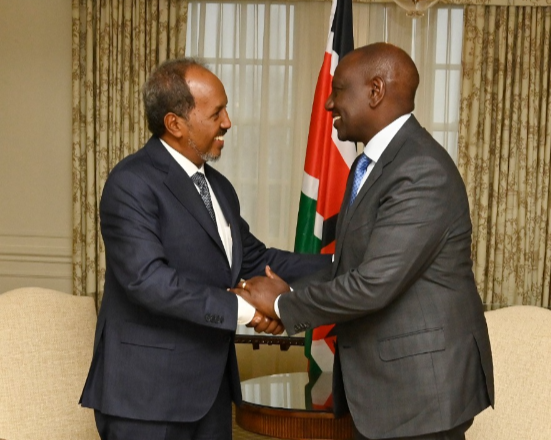 President William Ruto and Somalia's Head of State Hassan Mohamud in Washington, D.C. in the United States of America on December 15, 2022
Image: PCS

On Wednesday morning, nine people were reported killed in twin car bombings in central Somalia. This followed an attack on a Mogadishu hotel in November and another in August last year.

The attacks are on the backdrop of a sustained bilateral and multilateral campaign by the new President, Hassan Sheikh Mohamud, to rally the international partners to help in the war on terrorism and al Shabaab.

Since returning to power for the second time in June 2022, President Mohamud’s meetings with foreign leaders in international meetings have always featured talks on collaboration in the war on terrorism.

This has been the case during his visits to Turkey, Kenya, Eritrea, Djibouti, Egypt, Uganda, Ethiopia, Algeria and the US.

The President had promised to fight al Shabaab in his second stint in power but the terror group has continued to launch deadly attacks, including the one on Hotel Hayat in Mogadishu on August 19, 2022.

At least 21 people were killed and more than 100 injured.

A tough-talking President Hassan on August 23 in a televised speech declared that his government would launch a "total war" against al Shabab, after the group staged the deadly hotel siege in Mogadishu.

He, however, said the Somalia National Army’s operations in parts of the country had gained significant ground, especially in Galmudug, Southwest and Hirshabele states.

“Today's cruel and cowardly terrorist attack on innocent people by the morally bankrupt and criminal Al-Shabab group cannot discourage us, but will further strengthen our resolve to defeat them once and for all. Our government & brave people will continue to defend Somalia against evil,” he said on Twitter.

On September 16, President Hassan met with US Secretary of Defense Llyod Austin at the Pentagon during his visit to Washington and discussed partnership in securing Somalia from terrorism.

“The USA is a valuable partner in Somalia's national security and stabilisation efforts,” President Hassan said.

And following his meeting with Secretary of State Antony Blinken, President Hassan said they agreed on the importance of “combating terrorism, promoting good governance and responding to drought in Somalia”.

In his address to the 77th Session of the UN General Assembly, President Hassan called for multilateral efforts in the war on terrorism, saying, “We must work together collaboratively as a community of nations to confront our common obstacles, including the fight against terrorism”

“The most important lesson we have learnt in the long modern war against international terrorists and terrorism is that neither can be contained or degraded: they need to be comprehensively defeated. We must continue to stand up to them with all our collective strength,” he said.

“I cannot prioritize between these three interlocking challenges because they are equally as dangerous and directly hamper any progress,” Hassan observed.

In his meeting with UN Secretary General Antonio Guterres on the sidelines of the UNGA meeting, Hassan said they discussed his government’s efforts in tackling the ongoing war against Al-Shabaab, among drought and humanitarian response challenges as well enhancing cooperation between Somalia and the UN on these areas.

He said Somalia is working with international partners to overcome the complex and interlocking challenges it is facing "as one finger cannot wash a whole face: Partnership is key for all development”.

During his meeting with Uganda President Yoweri Museveni, Hassan said his administration is determined to confront terrorism militarily, ideologically and by dismantling their illicit financing.

During the Arab League members meeting in Algeria in November, Hassan reiterated the importance of all respective members working with Somalia to defeat international terrorism.

The Somali leader has also been using the media to push his agenda against Al Shabaab through Opinion Editorials in local, regional and international media.

One such article was published by a local website called Hiiraan Online.

In the article, President Hassan declared there is no turning back in the war on Shabaab, calling on the local communities to join in the fight against the terror group.

He noted that although the Somali government and its international partners were actively fighting the militia, it is the people of Somalia’s actions and ambitions that would re-invigorater joint actions to defeat it.

“Al-Shabaab will not be defeated by the gun alone. We must use military force, corrective ideological education, and starve them off their illicit financing.

"I reiterate my call to the Somali people to have faith in our collective efforts and to bravely resist cooperating with Al-Shabaab in any shape or form, regardless of the cost,” the President wrote.

In another article published by The Economist in July 2022titled Somalia’s president wants help to fight Africa’s terrorist groups”, Hassan said terrorism still wreaks havoc across Africa, Asia, the Middle East and East Asia, and most of the world, including Europe and America.

Citing the 2022 Global Terrorism Index compiled by the Australia-based Institute for Economics and Peace, the Somalia leader said terror attacks were still on the high.

‘”Ultimately it is for Somalis to secure their future against Al-Shabaab. Yet we are grateful for the support provided to Somalia by all of our valuable international partners in the fight against international terrorism. This partnership is vital because although Al-Shabaab and Islamic State cause most suffering in their localities, they do not hide their international ambitions, “he observed in the article.

He added that given the terror group had shown ambition to expand their brand of violent, inhumane misery to new geographical frontiers, it makes it all the more pressing to re-double international efforts in security co-operation and effective development assistance.

In yet another article, this time appearing in The Guardian headlined “Somalia is not just a story of violence and state failure. Focus on our strengths” President Hassan said while al-Shabaab remains a clear threat in Somalia and the wider region, the government, people and international partners have mobilised in unison to confront them.

“This collective effort is bearing fruit in terms of the number of newly liberated territories and defeated terrorists who traumatised communities,” he wrote, further observing that international partnership helping to facilitate the success of the war on terrorism is among the real strengths that must be complemented with stabilisation assistance to ensure the gains made become permanent.

The President also put his case in the war on Al Shabaab at the US-Africa Leaders Summit, saying mobilising and engaging society is important, and is “what makes terrorists act like fish out of water”.

“They cannot exist without the community, and if the community rises up against them, they have no choice except to run away,” he said during a panel discussion on December 14.

In his New Year article in the Nation, Hassan said they will continue in their successful efforts to rid Somalia off international terrorism permanently.

“We will work even more closely with our valiant people and partners to secure the future of our country and region and further build on this [international partnership] by collaborating even more closely in information sharing, joint intelligence exercises, de-radicalisation education, and high-value targeted operations,” he said.

The terrorists had erected an illegal roadblock before killing the two.
News
1 month ago

Stability in Horn of Africa depends on peace in Somalia – Ruto

This follows sustained offensive from the Somalia National Army and other local personnel.
Counties
1 month ago
Post a comment
WATCH: The latest videos from the Star
by ELIUD KIBII Subeditor and writer
Siasa
07 January 2023 - 11:00
Read The E-Paper