A number of former coalition supporters have switched sides in favour of Kenya Kwanza. 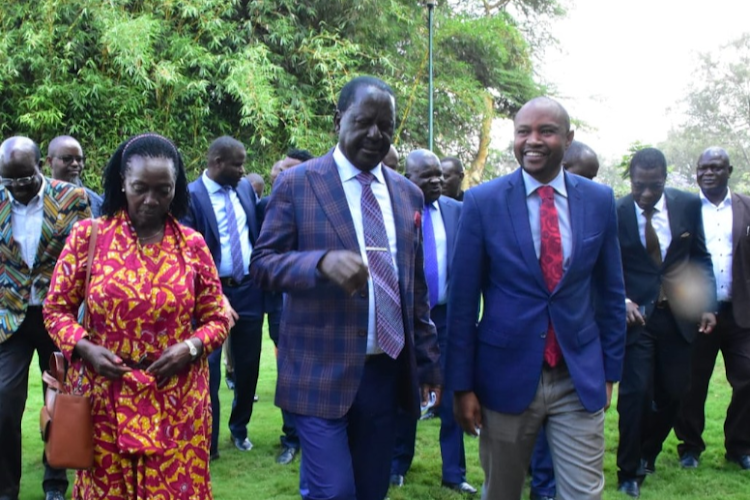 How things change: Francis Atwoli was at State House during the Jamhuri Day celebrations, jostling to sit closer to the high table than some Kenya Kwanza stalwarts.

He has since gone public that if President William Ruto beat them when he was deputy president, how then can Raila possibly expect to win against him in 2027 now that he is President?

Saitabao Kanchory, on the other hand, is blaming Junet Mohammed and Makau Mutua for their loss.

Wambugu Ngunjiri, who had sworn that Ruto will never be President, he of the Kitaeleweka hashtag, is now all praises, assessing the first 100 days tenure of Kenya kwanza as having been a success so far.

He is going as far as castigating those that are demonising the Hustler Fund by telling Kenyans not to repay.

Ngunjiri, who bitterly lost his Nyeri Town parliamentary seat due to supporting Raila Odinga, is now keen on working with the government of the day.

Peter Munya is now on record as praising President Ruto for his great time management style. He said that within a given day, the President is able to accomplish so much in comparison to the previous administration.

Kimemia has gone public in supporting the new administration and both he and Cecily attended the recent thanksgiving ceremony at Kipipiri in Nyandarua county last Sunday. On Monday, Kimemia was present both at Nyayo National Stadium and at State House as well.

Further, both Governors Gladys Wanga and James Orengo have pledged to work with the national government for the sake of development.

In fact, Kisumu Governor Anyang' Nyong’o was present at State House to sign up a Sh30 billion greening project for Kisumu. The project is being sponsored by the UK government.

This is the same day there was an Azimio rally at Kamukunji. He has since come out to explain himself as to why this was very important for development.

Curiously, Mutahi Ngunyi, the erstwhile State House operative that had predicted that Raila Odinga would win by a 60 per cent margin against Ruto is now all over Twitter claiming that all along, retired President Uhuru Kenyatta fulfilled his promise by supporting Ruto.

Nothing can be further from the truth. He of all pundits was an active strategist in ensuring his childhood admiration Raila, a man that they shared a neighbourhood in Jericho estate, finally becomes President.

Bouncing back as TV analyst, Martin Oloo, the immediate past legal adviser to the powerful Interior CS Fred Matiang’i is now on record as stating on NTV that the D in the DP meant deep state. He said that Ruto was the real power in the Uhuru administration.

Even Kieleweke, Azimio bloggers, the very abusive, insolent and vulgar ones like Alex Matwere, Solomon Kuria and another one named Njohi (alcohol), are all jostling for space to be recognised as having crossed over.

Now that street protests have dwindled, the online streets of social media have new ‘street urchins’ and this group of bloggers are well employed to earn a living, throwing epithets at anyone as long they get paid for it.

Mahatma Gandhi put it aptly that politics without principles is one of the greatest sins of mankind. This kind of political opportunism is quite telling that some people will always play safe as long as their bread is buttered.

Banking upon state largesse, such individuals would rather sell their soul to the devil, as long as they are in the good books with the powers that be. These turncoats now have the audacity to castigate Azimio now that it didn’t win power.

In fact, none other than Ida Odinga, the wife of Raila, has come out crying foul that the people now criticising the Odinga family were the ones who were at his house pretending to be friends.

Jumping ship is good for personal gain if at all, but as DP Rigathi Gachagua aptly put it, they will have to wait a little bit longer since the government knows who stuck their necks out for the victory to be realised.

It was a very narrow victory for President Ruto and Azimio big shots should not fight among themselves over who was responsible for their election ...
Opinion
1 month ago