• Ambassador Cristina Díaz Fernández-Gil says Spain and Kenya will continue working together to consolidate and strengthen the bonds that unite the two sates.

• The envoy also said the two countries share as a priority the cooperation on security issues and fight against terrorism. 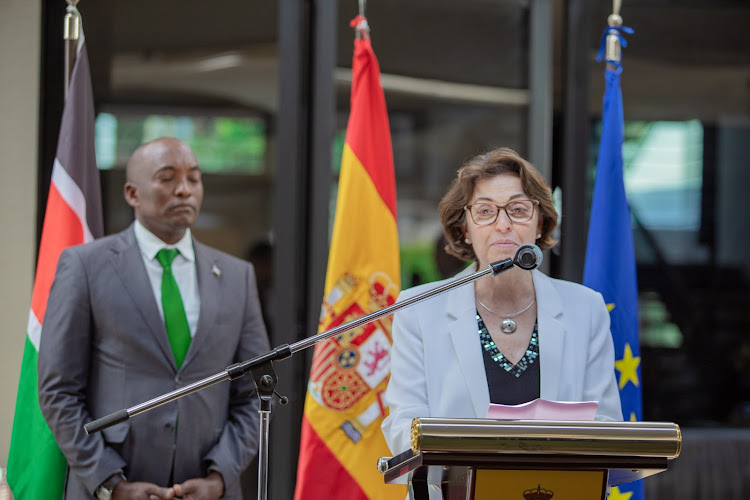 Spain will continue to strengthen bilateral economic ties such with Kenya under the new administration, the country’s ambassador has said.

Speaking during Spain National Day on Wednesday, Ambassador Cristina Díaz Fernández-Gil said she is confident that under President William Ruto´s mandate, Spain and Kenya will continue working together to consolidate and strengthen the bonds that unite the two sates.

“We share common interests in the area of economic and trade relations, with an important presence of Spanish companies in Kenya implementing projects in strategic sectors such as energy, transport, water, agriculture and tourism,” Ambassador Gil said.

The envoy also said the two countries share as a priority the cooperation on security issues and fight against terrorism.

“I welcome Spanish participation in the EU program to prevent terrorism in public spaces (implemented by FIIAPP [International and Ibero-American Foundation for Administration and Public Policies ] and the Spanish Guardia Civil,” she said.

On people-to-people relations, the ambassador said cultural and education exchanges provide the two states and the citizens the possibility of developing stronger links.

“The promotion of Spanish language offers global opportunities and remains a priority for us. … many Spanish foundations and NGOS working in the areas of health and education as well as in favor of women and girls,” she said.

“The cooperation between these two countries remains progressive through deliberate collective actions in several sectors in Kenya’s development agenda. Top of it is the trade and investment, which the ambassador talked about, culture, education, health and tourism,” Amb Lemoshira said in his speech.

He noted that the Kenya-Spain financial bilateral cooperation framework signed in 2009 has been of benefit towards national development agenda through financing of priority projects in water, energy, transport, communication, ICT and solid waste management.

“Kenya thanks Spain for identifying it as a priority country for its engagement in this region,” he said.

Kenya and Spain on May 11, 2021 held a virtual inaugural political consultations, which were co-chaired by PS Ambassador Macharia Kamau and his Spanish counterpart Christine Gallach Figueras.

With Spain identifying Kenya as a priority for increased Spanish investments in Africa under its Investment and Trade Strategy dubbed “Horizon Africa’ launched in 2020, the meeting focused on trade and investment, education and Covid-19 vaccine support.

On Wednesday, Ambassador Gil said multilateralism is the only possible path to tackle issues such as climate change, protection of environment, ecological transition, demographic growth, food security and rapid urbanization.

International terrorism and violent extremisms are something that unfortunately links us.
News
3 years ago
Post a comment
WATCH: The latest videos from the Star
by ELIUD KIBII Subeditor and writer
Siasa
23 October 2022 - 16:00
Read The E-Paper