MUGWANG’A: As we honor heroes, let's be inspired by their sacrifices

A nation is as good as its citizens. Every Kenyan who wakes up every morning to go work is a national hero and treasure.

• Some of these heroes are still with us and they include Azimio leader Raila Odinga, Siaya Governor James Orengo and former Meru Governor Kiraitu Murungi.

• These are all people who fought hard to make Kenya the haven of democracy that it is today. We honor and salute their sacrifices. 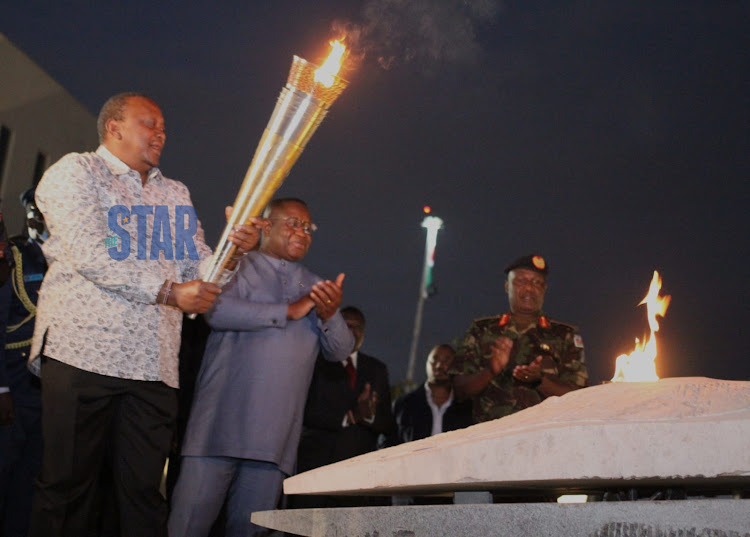 President Uhuru Kenyatta lights the torch of eternity....The flame will remain on to commemorate the lives of all the warriors who fought for Kenya's liberation
Image: ENOS TECHE

It was the day Kenyatta and five others — Achieng' Oneko, Bildad Kaggia, Fred Kubai, Kung'u Karumba and Paul Ngei — were arrested by the colonial British administration for their involvement in the resistance against British invasion and rule in Kenya.

Since the struggle involved so many others such as the Mau Mau and other resistance movements across the country, it was only okay that the holiday be renamed “Mashujaa Day”, translated as “Heroes Day” to accommodate all our independence heroes.

These are people who, with way less sophisticated weapons, decided the brutality of the British on our people was too much, enough was enough, and it had to stop, no matter the price. Most of them paid the ultimate price as they were executed in their defence of our land and people. These are heroes worth commemorating and honoring.

The story of our forefathers and mothers who went into the forest to fight for the sovereignty, freedom and dignity of African posterity teaches us the value of selflessness and loyalty to our people and our nation.

The selflessness of these men and women plays out in the fact that they fought not just to survive the day, but to make sure their generations — we of today — would be able to walk freely on our land and reap the plenty that is definitely found within our borders.

I want this to challenge everybody, whether in public service and in the private sector. Your position is not meant for self-gratification, but to build a better country that serves the current generation equally and promises a great future for the future generations.

Do not be selfish and corrupt, do not be selfish and with ethnic bias. Do not be nepotistic or unfairly favoring. Treat everybody the way you want your relations in the future to be treated by someone in your position or a similar one. When handling public funds, behave the same way you would want an employee in your private business to handle your finances — with integrity.

In a country like ours, where democracy has been growing impressively, it is important to hour the heroes of the Second Liberation, who ensured that after attaining self-rule, Kenyans could express themselves in a safe space without fear.

Some of these heroes are still with us and they include Azimio leader Raila Odinga, Siaya Governor James Orengo and former Meru Governor Kiraitu Murungi. These are all people who fought hard to make Kenya the haven of democracy that it is today. We honor and salute their sacrifices.

Our disciplined forces are the most under-sung heroes we have today.

While it is living nature to run away from danger, these women and men will be running towards the danger, to subdue it, and keep everyone safe. Save for a few elements who feel very entitled to “chai”, this family of brave men and women should be accorded maximum respect and honor.

We honor our Kenya Defence Forces for protecting Kenya from all external threats. We honour the National Intelligence Service for ensuring danger is detected and thwarted. We thank our DCI for making it hard for criminals to run free. We thank the Judiciary for upholding justice. Any corrupt figures in the Judiciary should feel ashamed, out of place and exit.

A nation is as good as its citizens. Every Kenyan who wakes up every morning to go work is a national hero and treasure. Every Kenyan who dutifully and holistically pays their taxes is a nation-building hero, who should feel recognised and appreciated on this great day. To all our sportsmen and sportswomen, who have flown the Kenyan flag high on the global stage, Hongera sana Mashujaa wetu.

All the staff of the Independent Electoral and Boundaries Commission should be applauded for their patriotic duty. Fellow Kenyans, these men and women work under very difficult circumstances during the electoral period. They withstand pressure to be biased, some face intimidation and others experience physical harm all to sway them in ways that may subvert the will of the people. This is great sacrifice for the country.

To former President Uburu Kenyatta, 10 years of service as President and presiding over a peaceful transition of power, for all the work he has done most notably on infrastructure and healthcare expansion, that man should be saluted.

As we mark this day, let us intently interrogate the spirit of selflessness and duty to country that inspired these men and women. Let us be guided and inspired by their character to be patriots that build a better country for both the present and future generations. Happy Mashujaa Day, Shujaa.

The country will mark Mashujaa Day on Thursday at the venue.
News
1 month ago

It is important to remember those who have gone before us, he said
Sasa
1 month ago