• Belying everything is a storm of very bad feelings and gut-wrenching anticipation.

• Though on opposite sides, they are acutely aware the next days will be tough for their floundering relationship, just like this nation. 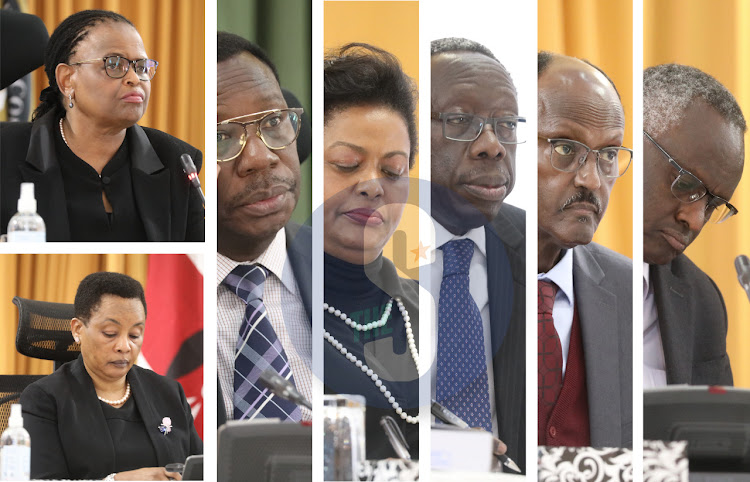 Pinky pinky ponky sounds like something nice. She is trying to remember the rest of the lines, as the child playing on the floor hums it.

The drama gives relief in a different sense here, where innuendo is king. Legalese and meaning elucidate, bamboozle, and obliterate opponents.

Belying everything is a storm of very bad feelings and gut-wrenching anticipation. Though on opposite sides, they are acutely aware the next days will be tough for their floundering relationship, just like this nation. The older ones can control their external emotions about the divorce; the younger ones play on the floor.

Everyone anticipates a win for their man, and everything remains frenzied, despite the hollow, hollow… every now and then. The trailing red gowns disappear, left off stage and the ghosts of Mutunga, Maraga, (in that order) behind them, the former in his green gown and stud. This time, none is wearing those odious wigs.

The children say: “They look sooooo strange”, the mixed metaphor eluding them.

“Wasn’t that the same sweaty man who also said a plumber who remains in your bathroom while you bath is no longer a plumber but a sexual predator?”

“What is a sexual predator? The child asks innocently “Is it like an allegator?”

“Go and play outside!” The parent thunders, though nobody bothers. The woman smiles, satisfied, wondering what he would answer.

Nobody sanctioned the grandees when they cited Shakespeare or Achebe, but they chastise this one in English arguing that that language is foreign to this setting. No irony.

Tragedy, and comedy at once, the cruelest of judgments. Truth is, the author is this torn Republic itself, and its cherished Constitution. Everyone though, is fixated on that miraculous miniscule drop of victory.  The temptation to laugh with unbridled joy is great but their souls cry bleeding with anticipated grief.

The prize sought is neither democracy nor democratization at all, but who will get their dirty hands on the pie, laced in velvet covering rotting molasses.  S(h)immering gossamer greed underneath.

Here, the rainbows sometime come in threes. Laddie Ole, pale third ghost, belatedly joins the parting cortege, dressed in traditional regalia carrying his rungu, a promise mace. Having just managed to pick himself up hurriedly from the floor after the jostling, he now walks behind Maraga, hop-limping.

Wanjiku, who has now aged looks at them from her wheelchair, silent and unseen, asserting her aura. Invoking her goddesses to come to ritual she prays: “Forgive us”. Everyone feels her presence.  There is no time. She may not be here if there is a next time.

On trial now, their hearts beating, the judges face forward as though waiting for the guillotine. They are Afwirians and know this country better than everyone.

Behind the courtroom they left behind is filled with cacophony. After moments of light relief accompanied by disconcerting sights of grown men in jiggling wigs giggling against the precipice, they share a guarded conviviality. They might easily burst into “God be with you till we meet again”, for at this rate, we shall. Livelihoods and careers have been made and broken here.

Why now, why now? the children want to know.

The diabolos tritone is grinding. It does not sound like a comedy. Far from it. The ominous distant soloist sings a eulogy near the graves. Pio Gama Pinto, Dedan Kimathi, Geoffrey Gitobu; Chris Msando, JM. Kariuki; Daniel Musyoka… lie to a still haunting requiem. Nobody stood in respect.

“How did we get here?” Eh mungu nguvu yetu?”

The presidential election petition has become the country’s favourite sport where all ages and creeds invest every emotion.

In bars, the bottles remain half-full, not out of restraint. People don’t even realise they are celebrating their cherished nation and Constitution, so overhung with the kind of anticipation reserved for a bull, headed for the slaughter.  Haki iwe ngao na mlinzi. Until the iudicium.

The parental judges lean forward admonishing everyone gently in kindly fashion, heads tilted, as they peer sternly through their glasses keeping everyone amused and bemused, all at once.  The world is watching.

Their benign, relaxed bodies, gentle tones and decorum belie the risks and tasks ahead, the long nights, the long knives directed at each other and the self. Nobody can be neutral here.

What do you want us to do? They ask us.

Everyone has a plausible version, like that story of the elephant and the blind man.  Can everybody be a bit right?  Tweet, tweet, tweeting, especially profanities.

“They lure you to enter the brothels, but also tempt you to leave just as quickly through the swivel door. For the dribble and dross of perfidy is piled on the pyre of sovereign will, erected over suspected criminality, lies, theft, sexual assault, human rights abuses, and even crimes against humanity. And you regret those few minutes and the spent cash,” chides the gibberish journalist.

Elsewhere, Madman, favourite-of-Jevanjee is muttering to himself, trying to figure out the doctrine of necessity for his speech tomorrow lunchtime…

“Good laws only work when the land beneath the tree is fertile and capable of yielding harvest.”

As the Sunday morning anticipation light filters through, Madman-of-Jevanjee is clobbered by his angry askari friend who has walked here to this makeshift home, stark naked but for his rungu from the courts after being robbed.

“Songa!” the cop freezing, nudges Madman under the covers, not bothering to dress. Rubbing his head, Madman offers him some bread, but the cop can’t be bothered.

The child instinctively knows that this is the wrong question and continues humming:

Willy Mutunga was the Chief Justice and president of the Supreme Court, 2011-16.

This judgment is not the end of our movement - Raila

He said he disagrees with the verdict of the Supreme Court of Kenya.
News
4 months ago

Orengo said the Supreme Court did not take enough time to look at what happened.
News
4 months ago

OMWENGA: Time to unite the country

As provided under our Constitution and laws, the Supreme Court’s judgment is final
Siasa
4 months ago