• One, its claims on the return of Raya and Wolkayit to Tigray region and two, the provision of basic utilities by the government. 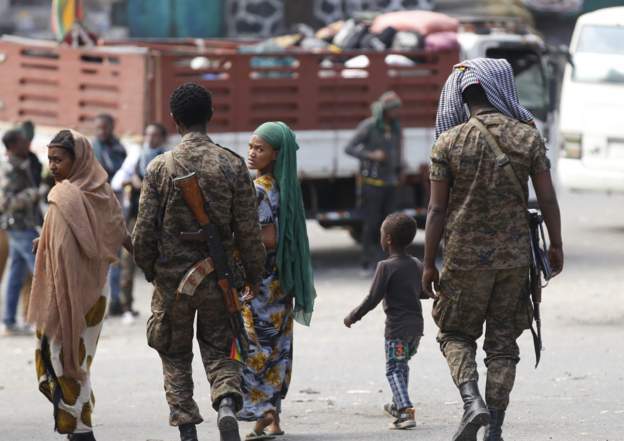 The people of Ethiopia were under nearly three decades of TPLF’s reign of terror.

Its 27-year rule was characterised by massive popular disenchantment, extrajudicial killings, forced disappearances, exiles and a long list of other vices. Acting both as kingmakers and kings, the architects of the TPLF reigned supreme in Ethiopian politics with brute force and intimidation.

Whoever dared to criticize the regime either dilapidated in concentration camp style prisons or vanished without trace. As you read this, the people of Ethiopia are still struggling to reconcile themselves with the massive emotional, physical and moral trauma they have been subjected to. As a matter of fact, during its iron fist rule, the TPLF orchestrated more than 113 inter-ethnic conflicts in different parts of Ethiopia.

In its brazen attack on the Northern Command of the ENDF, the TPLF not only killed about 1,600 Ethiopian soldiers who were in the trenches protecting the people of Tigray but also looted the arms reserve depot in Mekele.

They got away with, among others, medium and long-range missile rockets and a considerable hoard of ammunitions. By attacking the Northern Command, the TPLF crossed the red line and trampled on the dignity and sovereignty of the Ethiopian people. And the ENDF was forcefully dragged into this ill-motivated war to protect hapless civilians and ultimately, defend the sovereignty and territorial integrity of the Ethiopia.

Pressuring the government to blindly tolerate this outrageous act by a few quarters of the international community, while disregarding TPLF’s terrorist insurrection, would be an inimitable madness.  After all, the federal government has an immutable duty of protecting the constitutional order and the rule of law.

In a similar fashion, prior to attacking the Northern Command, the TPLF has clandestinely been executing and banishing non-Tigrayan technicians in charge of running, maintaining and repairing basic utilities such as electricity, telecommunications and banks.

The unwarranted deaths and disappearances of these souls went unnoticed by the international community.  Even in the midst of the November 4 attack, the TPLF managed to pilfer 1.6 billion Birr in the new currency from a government plane grounded at the airport in Mekele to effect the currency change. TPLF cabal impudently declared that it is “willing go to hell to destroy Ethiopia” on October 13, 2021. After pre-emptively attacking the ENDF, once again, the TPLF shamelessly proclaimed the ENDF attacked it from all fronts.

Speaking of negotiating with TPLF, it is of utmost importance to note the fact that war should be a last resort only in cases of failures of all other avenues of peace. In the case of the TPLF, resorting to war was predicated on illegitimate grounds.

On the one hand, the TPLF downright lacks tangible political agenda that could otherwise have been resolved through negotiations. The TPLF fanatically sticks to its antiquated dictate that “If I can’t rule Ethiopia, it needs to be dismantled right away!”. Both stale arguments fall short of serving as justifications for declaring war on an entire nation.

As often argued by the Ethiopian government, peace is a sine qua non [essential condition] for democracy and prosperity. Which is exactly why as much as the government was undertaking transformative reforms in political and economic arenas, it was also concurrently engaged in ensuring the rule of law, while advocating peace, reconciliation and healing to many of our ailments as a nation that were borne of TPLF’s monstrosity.

While the government is tirelessly working to bring about a negotiated settlement under the umbrella of the African Union, the TPLF is busy frustrating the peace process by presenting two inadmissible preconditions:

One, its claims on the return of Raya and Wolkayit to Tigray region and two, the provision of basic utilities by the government.

Regarding “return of Raya and Wolkayit to Tigray region”, it imperative to note that their fates will be decided as per the provisions of the Constitution. As one of the members of the Ethiopian state, TPLF cannot lay claim to any territory as this is the prerogative of the federal government and absolutely unlawful.

The ulterior motive of the TPLF, in this regard, it to create an arms supply and logistical corridor through Humera. When it comes to the restoration and resumption of basic services (electricity, water, telecommunications, banking…etc.), it is essential to understand the fact that ensuring their provision is rather the duty of Ethiopian Government. As such, it falls short of being a precondition for negotiations.

Complicating matters even further, as a terrorist cabal with no history of settling its political scores, if any, through peaceful means without resorting to violence, the TPLF is adamant on the use of violent force to destabilize not only Ethiopia but orchestrate a vicious cycle of conflagrations across the region as was the case during its dictatorial rule.

On August 24, 2022, the TPLF started yet another senseless war for the third time. While sowing the seeds of its destruction in Amhara region, it now claims it was “attacked by the ENDF” from Raya front. The spokesman of the TPLF went to the extent of lying that “truce has been broken”. Yet it is paradoxical to cry foul when it was meticulously self-inflicted.

Unsurprisingly, the TPLF is also closely working with mortal enemies of the Ethiopia that are determined to destabilise Ethiopia and the region. The persistent attacks by the OLF and the recent short-lived incursion by Al-Shabaab into the Somali region of Ethiopia are clear demonstrations of this. These forces provide continued technical and logistics assistance to TPLF and vice versa.

At this critical juncture, while actively disregarding TPLF-led disinformation campaigns both offline and online, the government urges the international community to pressure the TPLF to lay down arms, refrain from further provocations and come to the AU-led negotiations.

The government remains abundantly committed to peacefully resolving the conflict in Tigray. Instead of putting undue pressure on the government of Ethiopia, we also urge the international community to pressure the TPLF into the negotiation table.

In the event that TPLF fails to honour this clarion call, the federal government will unfortunately be forced to use any means at its disposal to protect defenceless civilians, including the children TPLF touts as soldiers and ultimately safeguard the constitutional order of the nation.

Embassy of the Federal Democratic Republic of Ethiopia in Nairobi, Kenya

EBC says that the plane was shot down after entering Ethiopian airspace from Sudan.
News
1 month ago

Ethiopia's Tigray conflict: The beauty queen who risked her life to reach the UK

Our journey was not just a journey in the dark. It was pervaded with the darkness of death, she said.
News
2 months ago

More than 18 million people are food insecure due to drought, and more than seven million children face acute malnutrition
News
3 months ago
WATCH: The latest news from across Africa
Post a comment
WATCH: The latest videos from the Star
by ETHIOPIA EMBASSY
Siasa
09 September 2022 - 05:00
Read The E-Paper