Githuku is among individuals who pushed for the Second Liberation, particularly the release of political prisoners

• The Release Political Prisoners  movement was a push by mothers of the political detainees between February 28, 1992 to January 19, 1993.

• Nicknamed Ras, because of his dreadlocks, Githuku recalls how they used songs and prayers during this struggle. 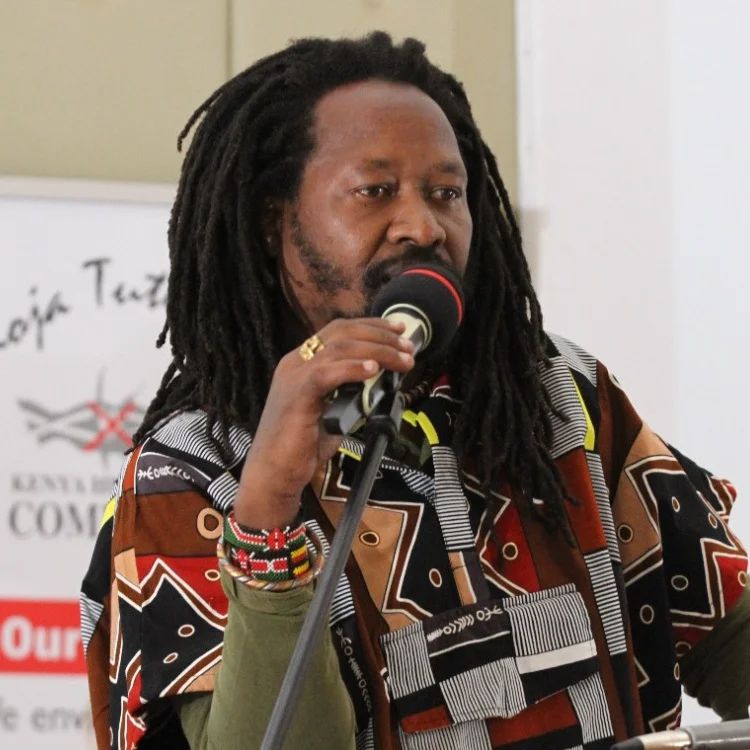 Ndungi Githuku describes himself as an artivist, combining art and activism.

Githuku's name is popular in the civil society world, having been among the individuals who pushed for the Second Liberation, particularly the release of political prisoners.

The Release Political Prisoners  movement was a push by mothers of the political detainees between February 28, 1992 to January 19, 1993.

The goal was to secure the release of their sons, and to pressure the President Moi's dictatorship to uphold democratic principles by allowing fair, multi-party elections and freedom of speech.

As highlighted by The George Padmore Institute, the movement was also backed by the Committee for the Release of Political Prisoners in Kenya,  which was established in July 1982 in London.

CRPPK campaigns continued throughout the 1980s into the 1990s, publishing the influential Kenya News bulletin and coordinating with other Kenyan democratic and solidarity movements abroad, the institute notes on its website.

"Aside from compiling materials on CRPPK campaigns and events, this collection also gathers documents for groups like the London-based UMOJA-Kenya and the underground organisation Mwakenya, the latter working against Kanu government in Kenya," it says.

Nicknamed Ras, because of his dreadlocks, Githuku recalls how they used songs and prayers during this struggle.

"With many other young people, we would use music to pass time and sometimes to encourage ourselves and inspire the public, who would come to stand in solidarity with us and the mothers," Githuku told the Star in an interview ah his home in Kabete, Kiambu county.

Born in Mwimuto, Kabete, Githuku schooled at Visa Oshwal Primary School (1979-87), Jomo Kenyatta High School in Nakuru (O-Levels) but completed at Afraha High School, from where he proceeded to the Kenya Polytechnic to study graphic arts and design.

It is at Jomo Kenyatta High School that he discovered art, as he was active in drama and music clubs. That's where his passion was.

He started practising activism even without knowing it at the school, leading to his expulsion in his fourth form.

"We raised an issue concerning the conditions of the school with people like Edwin Buhere — now a creative director —, who was my classmate, and this was in 1991.

"I would say that's where my activism began even before I knew the word activism. It is alter that I knew what were defending were human rights," Githuku said.

With Buhere, they prevented boys from rapping girls, telling them it was wrong and unacceptable and instead that they focus on the agenda —raise issues over the conditions of the school. It was after this that he was expelled.

At the Kenya Polytechnic in 1992, he would join the theatre group and reconnect with his comrade, Buhere, whom they were pursuing the same course, and engaged in students politics.

It is at this time that the Freedom Corner protests for the release of political prisoners was happening. His aunty's four sons — his cousins — were among the political prisoners as they were in Mwakenya, an  underground socialist group that was fighting for multi-party democracy, and this incentivized him to join the protests.

"I would finish my classes and rush to the Freedom Corner in Uhuru Park, where we would protect the mothers from the police brutality. From there on, I became an activist and met so many people such as Dr Willy Mutunga, one of my mentors, Prof Wangari Maathai, Njeri Kabeberi and other great minds, including the mothers of political prisoners, who would give us a lot of courage,"he said.

But while many people think Freedom Corner protests happened for an year, Githuku says in reality, it was three days.

"At the now very famous Freedom Corner, the women spent three days, when the police came and brutalised us; Wangari Maathai's neck was broken, many other people got injured ".

"Interestingly, I also lost my sister's wedding shoe, which was happening the following Saturday. This was on a Wednesday".

After the attack by the police, the women were hosted at the All Saints Cathedral by the then Provost, Peter Njenga, who Githuku describes as a great human rights defender.

"He defied the church regime and accommodated the mothers in the bunker, from where they went on a hunger strike".

The struggle went on for another year, after which the first batch of political prisoners were released. They were Kang'ethe Mungai, Tirop Kitur, Karimi Nduthu — who was later assassinated in 1995 — and James Apiny Adhiambo, who had been jailed for life, having been linked to the 1982 coup.

After their release, the struggle shifted to the change of the constitution, where they moved around the country to educate Kenyans through theatre and music.

"That's where we blended art and activism and that's what I called artivism," Githuku said, adding art is a powerful tool that cannot be ignored.

"Art is beautiful. When the police would come to attack us, we would sing and I think sometimes they would also enjoy and take sometime before attacking us and it was until the songs were over that they would arrest us. Another ting we used was prayer.

"At one point in Kamukunji, during Saba Saba, there were masses behind us and when the police surged to attack us, we started praying. Njoroge Wanguthi, the late, and an ex-political prisoner, prayed for about 45 minutes and when he finished, somebody else picked it up for another maybe 30 minutes. Immediately we said amen, they arrested us".

Since then, he has been using music, poetry and the course of human rights, as he believes the gains must also be defended. 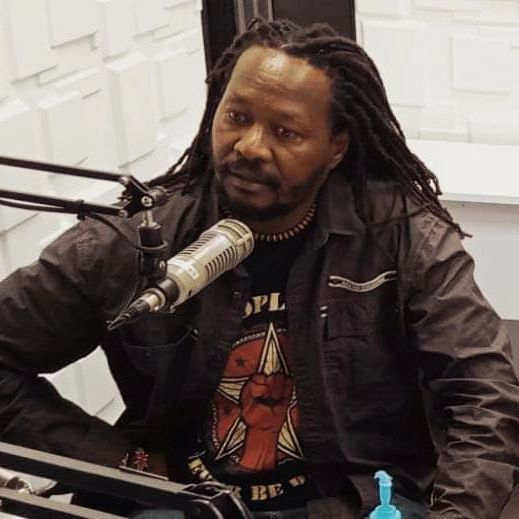 Artivist Ndungi Githuku during an interview on Radio Jambo
Image: HAND OUT

He argues despite the promulgation of the 2010 Constitution, there is still need to continue defending and breathing life into it, which is one of his incentives to join active politics.

He was among  those against the against the Building Bridges Initiative, instead calling for the full implementation of the Constitution.

"For example, Chapter Six is one of the things I see playing oout in terms of leaders' integrity. Little by little, I am seeing gains in this Constitution," Githuku says.

He now wants to add another hat: Member of county assembly in Kiambu county, representing Kabete ward as an Independent candidate.

He says the 2010 Constitution provisions such as public participation have encouraged him to vie, given it has been ignored by many politicians.

In his manifesto, he is proposing five people from each village that make Kabete and have them in village councils.

These individuals, he says, will be working with him in identifying the problems and the needs of the locals. This, he adds, will lead to transparency and accountability in leadership.

But why opt for the county assembly seat despite his involvement in national causes? 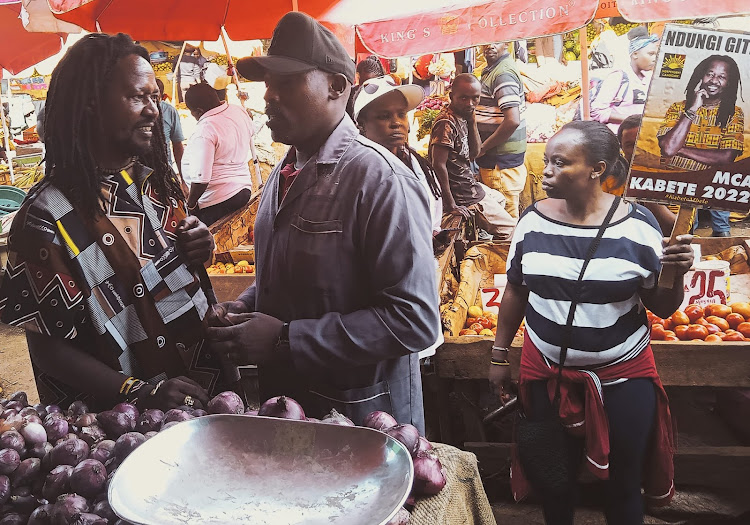 He says the seat is the most important in the new dispensation as far as devolution is concerned.

"It doesn't matter which President takes over. His role is to sign the allocations and its use is what affects your life at the grassroots. That's why I am telling locals they need a solid MCA," he said.

The activist is not vying on any party because he doesn't see any of them accommodating his ideologies.

Asked why he didn't align with the likes of Raila Odinga and Martha Karua, who are running on platform of reform, he said although they are his senior colleagues, he feels since multypartyism was restored,, parties became owned by people.

"Any party that you mention is identified with an individual and not with the people. That's why I find a contradiction. I'd want to be in a party that is a movement of the people, which we don't have.

"Inasmuch as those two are my allies, I am not yet satisfied parties can accommodate my ideals because of their internal dynamics, which will be a hindrance to my ideologies," he said.

Any party that you mention is identified with an individual and not with the people. That's why I find a contradiction. I'd want to be in a party that is a movement of the people, which we don't have

Githuku is running on lighting up Kabete, a ward that is just next to Nairobi's Westlands, but still lacks basic amenities such as roads, water and sewerage system.

He says his comrades are excited by his move to vie, with Mutunga calling him when he announced his bid. Others, he says, who are encouraging him include Maina Kiai, currently in the US.

"Mzalendo NG [Ndungi Githuku] will be a brilliant MCA for us all," Mutunga tweeted on July 18.

Kizito Mutahi, advocacy officer Empowering People in Care, said with such a background in resilience and fighting for the rights of the people, Githuku is ready to be an MCA.

Activist Alamin Kimathi said, "When good men give politics a go, the people get going. Kabete is right by veteran artivist Ndungi Githuku".

"With those kinds of people on my side, with me standing on the shoulders of these giants, I don't think Kabete will go wrong. We are on the right track. This is the time to liberate Kabete and show other counties we can change Kenya, one village at a time," he says.

They sold their agenda in Githunguri, Ruiru town, Kiambu, Waginge and Kikuyu towns.
InPictures
4 months ago

Nyoro says the units will receive Sh3.2 billion which will spur development across the county
Counties
5 months ago
Post a comment
WATCH: The latest videos from the Star
by ELIUD KIBII Subeditor and writer
Siasa
30 July 2022 - 05:00
Read The E-Paper