OMENGA: What does Ruto have in common with gold?

Ruto has been implicated in other scandals as well, including the Maize scam

• Ruto has had and continues to have one and only one mission: to get to the presidency by any means.

• If that is giving people false hope, so be it. If that is wearing a smile that obfuscates a thirst to avenge those who have wronged him or who may have, so be it. 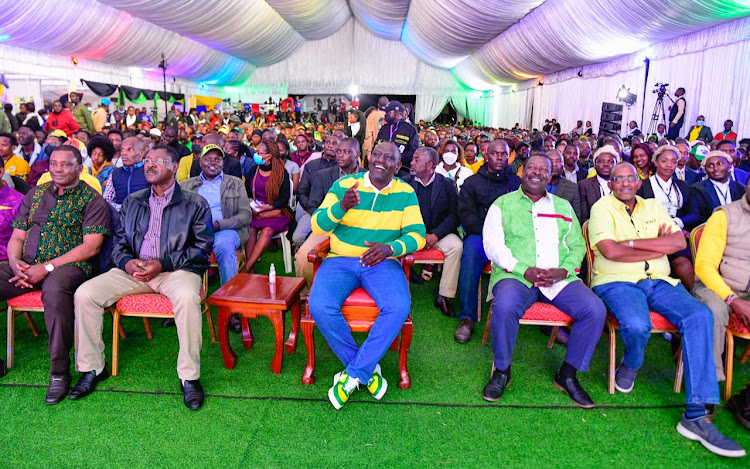 Not all that glitters is gold. And for those who have been studying the man long before he became deputy president, there is much one can share about William Ruto that may or may not be news to many.

He appeared in the national political scene as organizing secretary and later treasurer of the Youth for Kanu ’92 (YK92), a group that was specifically formed to drum up support for then President Daniel Moi in the 1992 election.

From an unemployed University of Nairobi graduate who was at times allegedly seen loitering near the Hilton with other unemployed youth, Ruto suddenly made it big financially by his close association with Moi.

Ruto’s rapid accumulation of wealth at a relatively young age is attributed by many to graft though he vigorously denies this.

The attribution of Ruto’s wealth to graft is supported by much that is not mere speculation or conjecture. For example, in 2006, Ruto was charged with defrauding the Kenya Pipeline Company of huge amounts of money through dubious land deals. Not surpassingly, that case, like all other serious economic crime cases, lingered in the system for years without any resolution.

In April 2011, he was acquitted of the Sh43 million land fraud charges for lack of evidence after the prosecution failed to produce in court then Finance manager Hellen Njue to testify on how she paid out the money.

Ruto was acquitted not because he was innocent of the charges, but because the government of which he was part of failed to produce a key witness to prove the charges against him.

Njue was in the meantime enjoying the enumeration, perks, and privileges of serving as a board member of the Coffee Board Development Fund, a position she was appointed to by none other than Ruto himself.

In early 2020, it was widely reported that the Directorate of Criminal Investigation decided to reopen the case.

Ruto has been implicated in other scandals as well, including the Maize scam. In early 2009, following a parliamentary inquiry, Ruto was accused by the Public Accounts Committee of illegally selling maize from the Kenya National Cereals and Produce Board, over which he had ministerial and administrative control.

Ruto on his part attributed the maize scandal allegations and claims of his involvement in corruption to the work of his “political enemies,” which was about the only thing he could say, given there were documents linking him to the scandal.

Like former US President Donald Trump who fooled and continues to fool mostly poor or barely surviving white Americans that he feels their pain, despite living in opulence, Ruto has done the same for millions of struggling Kenyans, who he has believing that he, too, feels their pain despite his swimming in his questionable wealth.

This is just not true. Ruto has had and continues to have one and only one mission: to get to the presidency by any means.

If that is giving people false hope, so be it.

If that is wearing a smile that obfuscates a thirst to avenge those who have wronged him or who may have, so be it.

If that is lining up one church leader after another courtesy of the same questionable wealth to have the church leaders sell him to their congregants, so be it.

If that is unleashing his foot soldiers to badmouth and attack President Uhuru Kenyatta and Azimio presidential candidate Raila Odinga, so be it.

And it has been so, except Ruto has reached the point of diminishing marginal returns where none of that is gaining him any traction, while Raila and running mate Martha Karua have caught up with him and whizzed by.

MAKODINGO: We need to elect leaders who live up to Chapter Six on leadership and integrity

Today, there are some people who have no problem with those who steal public resources.
Opinion
1 month ago

Karua: I teamed with Raila to rescue our nation, we are in a dangerous space

She said Kenya is at the brink of losing all that has been built over the years.
News
1 month ago
WATCH: The latest videos from the Star
Siasa
10 July 2022 - 07:08