MWAMISI: Why Kalonzo should be Oka flag bearer

• In 2013, Kalonzo was the running mate to Raila in Cord in a hotly contested and petitioned election. They believed they won.

• This happened again in 2017, a presidential election that was nullified over rigging. 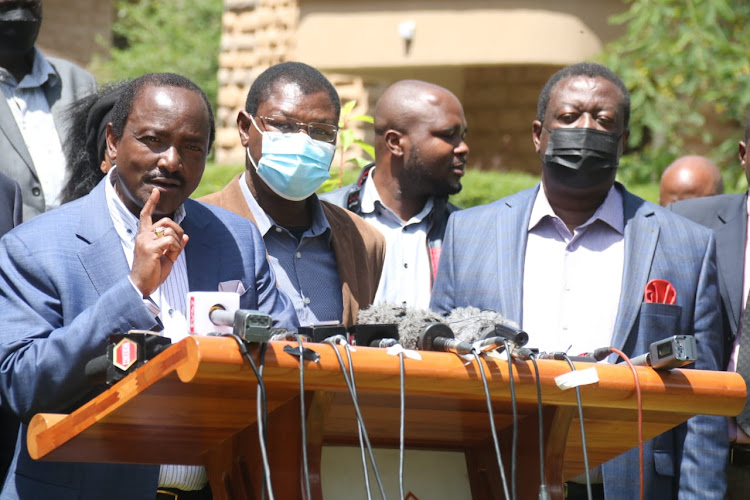 In the 2007 elections, Kalonzo Musyoka garnered 879,903votes, firmly anchored by the 98 per cent of the Ukambani region. He is the undisputed Kingpin of the Lower Eastern bloc.

In 2013, former Vice President Musalia Mudavadi managed a paltry 483,981 votes, a lot of it from Western Kenya, where he hails.

Raila Odinga of ODM got 780,000 votes from Western, and remains the political bigwig in Western, where he continues to win over ANC MPs such as Ayub Savula and Oku Kaunya.

In 2013, Kalonzo was the running mate to Raila in Cord in a hotly contested and petitioned election. They believed they won.

This happened again in 2017, a presidential election that was nullified over rigging.

Kalonzo is thus indisputably the most senior and most experienced principal in Oka and is best placed to lead the alliance. Mudavadi had very short stint a Kenya’s vice president in 2001, and he could not even defend his Sabatia seat in 2002.

Kalonzo always meets leaders from his region every beginning of the year to review and strategize about important matters touching on the community. This year is no different, and the meeting -scheduled for January 15.

His rivals such as governors Kivutha Kibwana (Makueni) and Alfred Mutua (Machakos) have unsuccessfully tried to organise their own meetings. Even Kitui Governor Charity Ngilu appeared to have deliberately snubbed their meetings in favour of the Yatta one. She knows Kalonzo holds key influence if she is to retain her gubernatorial seat or be appointed to Cabinet in the next government.

In the hurriedly organised meeting, Mutua and Kibwana tried to make an onslaught on Kalonzo, the man on whose coattails they have time and again had to clutch onto to stay alive in politics. They came out to blame him for every possible thing, including underdevelopment.

They forgot that they became governors because people like Kalonzo supported and made devolution to happen. Developing a community is a corporate thing, and nobody can develop regions or counties from their own pockets.

While Kalonzo believes in this second stab for the presidency, he also trusts in the strength of unity and collaboration with other leaders across Kenya. Oka has great potential to work with, but he remains politically strong in his own right, and Wiper, he boasts of legislators not only Ukambani but other regions.

Kalonzo was the Vice President who helped President Mwai Kibaki to fix the economy after taking over in 2002. He passionately supported Kibaki as he moved the economy from 0.6 per cent to over seven per cent in GDP. Kalonzo saw Kibakonomics first-hand and understands the power of a vibrant liberated economy. He knows how to restore and rebuild the economic opportunities that Kenyans want and deserve.

If Moi was the education President, and Kibaki was the economics President, Uhuru as infrastructure president, how do we build upon those legacies?

Kalonzo, if he were to win in 2022, will be remembered as Kenya’s employment president and the man who finally liberates Kenya’s economy. He will adopt the legacy of Kibakonomics, and having learnt from the best, he intends to facilitate private sector growth and reduce the overarching government control of the economy.

Kalonzo’s Uchumi Maradufu-24-hour economy blueprint is one he had in 2007 when he first ran for president. Many cities such as London and Sydney have reaped immense benefits from such approach.

He plans to make policy changes that will lower taxes and make affordable loans available to SMEs and businesses, which will enable a commerce-based and business-friendly economy.

This will unleash the power of many Kenyans, especially the youth who are struggling to find and afford capital for business and unlock Kenya’s massive potential. The difference between Kalonzo’s plan, and the bottom-up mirage is as clear as night and day. You do not boost business by giving handouts.

A commitment to a free secondary education is the natural next step in progressing our public services and will be music to the ears of Kenya’s hard-pressed parents.

Kalonzo has a concrete plan — low taxation, economic liberation, job creation, and public service development — and, as a seasoned peacemaker and diplomat, he will maintain Kenya as a mainstay for harmony and reconciliation.

He can be trusted with your money, having not been tarnished by corruption, to deliver the changes that you desperately want. He will unleash our power and unlock our potential.

Muturi throws OKA under the bus

Muturi said Oka principals only visited to wish him well following his surgery.
News
4 months ago