DAY OF SOLIDARITY WITH PALESTINIANS

•The international community decades ago determined its vision for peace, and that vision is the two-state solution on 1967 borders. 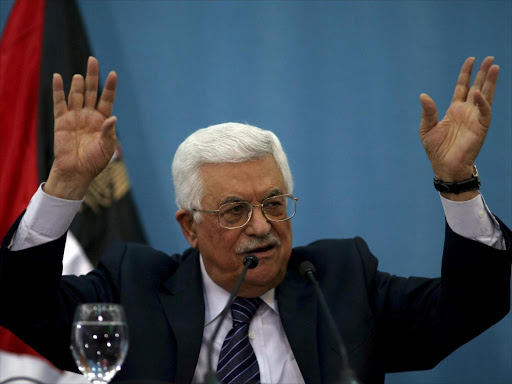 Palestinian President Mahmoud Abbas gestures as he speaks to the media in the West Bank city of Ramallah January 23, 2016. /REUTERS

H.E. Cheikh Niang, Chair of the Committee on the Exercise of the Inalienable Rights of the Palestinian people,

Allow me at the outset, in my name and on behalf of the Palestinian people, to extend my thanks and gratitude to all those around the world who believe in our just and historic cause and its centrality, and to all the peoples and nations that have expressed their solidarity with the Palestinian people and supported their legitimate struggle, bearing witness to their resilience and steadfastness in the Occupied Palestinian Territory, and at its heart Jerusalem, and to the struggle and suffering of our people in the refugee camps in our homeland and in exile.

We also express our gratitude to the overwhelming majority of States that have reiterated their support to the right of the Palestinian people to self-determination and their commitment to international law and UN resolutions.

The steadfastness of our people in their land and across the world, and your unwavering solidarity with our people are what have kept the cause of Palestine alive and present despite the passage of time and the succession of generations.

The international community decades ago determined its vision for peace, and that vision is the two-state solution on 1967 borders. This vision was enshrined in the resolutions of this organization.

United Nations resolutions have identified the terms of reference and the basis for a settlement to the conflict, as well as the mechanisms to achieve it within a defined timeframe, including through the adoption of Security Council resolution 2334 that aims primarily at salvaging the two-state solution on 1967 borders.

These resolutions have also determined the obligations of the parties as well as the obligations of third parties not to recognize illegal unilateral actions, non-assistance to such actions, to distinguish in their dealings with Israel between the Palestinian territory occupied since 1967, including East Jerusalem, and the territory of the Israeli occupying power, to ensure respect for international law and to provide international protection for our defenseless people.

We caution the states that have established trade or diplomatic offices in Jerusalem or those which have concluded agreements with companies or education institutions operating in settlements or buy products from these settlements, that all such actions are in violation of international law and encourage the Israeli occupation authorities to persist in the commission of crimes against the Palestinian people.

We tell these countries that through such actions you contribute to the suffering of our people as you help entrench the occupation of our land and you do not contribute to regional peace, security and stability.

The international community has long rejected Israel’s policies of colonial annexation and settlement expansion on our land, its violation of the rights of our people, its assaults against our Christian and Islamic holy sites.

This stance needs to be accompanied by concrete measures that translate the international consensus on the ground and allow our people to exercise their inalienable right to self-determination, realize their freedom and independence in their land and achieve a just and comprehensive peace in our region.

We call in this regard on all states that believe in the two-state solution and have recognized Israel to also recognize the State of Palestine.

Israel’s blatant rejection of the two-state solution and its insistence to entrench its occupation rather than end it, combined with the policy of waiting for the parties to be ready for dialogue and the achievement of peace, mean in practical terms allowing Israel, the occupying power, to finalize annexation through its illegal actions and its altering of the facts on the ground, which only render the situation more complex, and the possibility of achieving the two-state solution more remote, if not impossible.

That is why we have put forward alternatives and proposals in my speech to the General Assembly. Israeli authorities are jeopardizing the two-state solution and entrenching a reality of racial discrimination, a reality of apartheid, and its military forces continue to exert their control over our people, which we cannot accept.

World has let Palestine down as apartheid takes root — envoy

No one can reasonably await from the Israeli occupying power that is advancing settlements and allowing settlers’ violence to rampage; that is persisting in its aggression against our people in Jerusalem, in the Old City, in Sheikh Jarrah and Silwan, and against our holy sites; that is besieging our people in the Gaza Strip; an occupation that kills, that subjects our prisoners to ill-treatment, that detains the bodies of our loved ones, that destroys our homes and forcibly displaces our children; to awaken one day and choose on its own peace.

This will not happen in the absence of serious and intensive international efforts that include deterrent steps to put an end to such policies and crimes.

Excellencies, dear friends, 30 years after the Madrid Conference for Peace, we are more convinced than ever that international auspices are a necessity to achieve peace. Some may consider that the time is not ripe to launch ambitious international initiatives for peace or to revive the peace process because of the rejection of one party. This compromises the prospect of a solution.

My question here is the following: what prospect for peace was there before the Madrid Conference was held? How far apart were the parties? How long did the international community have to wait until the parties became ready for dialogue? We are ready to work with the international community, including the Quartet and the Security Council, to salvage the two-state solution on 1967 borders before it is too late.

We reiterate here that our hand remains extended for a just and comprehensive peace and stress once again the importance of convening an international conference under the auspices of the Quartet, as a Security Council mandated body, for this very purpose, with the participation of concerned parties to advance a genuine peace process guided by and in accordance with United Nations resolutions, with the objective of ending the occupation and resolving all final status issues, with a package of guarantees to ensure implementation of what has been agreed upon within a defined timeframe, so as to achieve the just and comprehensive peace that ends the occupation, realizes the freedom of the Palestinian people and their independence within their own State on the borders of the 4th of June 1967 with East Jerusalem as its capital.

From our side we will spare no effort upholding our commitments under international law, and we will continue working to unify our land and people and to hold presidential and legislative elections as soon as they can be organized in Jerusalem, and to form a national unity government whereby all components of which are committed to UN resolutions.

Says the position is in line with the declared positions of several other African states.
News
5 months ago

We will exert more efforts to put our Palestinian house in order and to achieve reconciliation and end division, and to consecrate the rule of law and human rights, and democratic principles and the freedom of expression, and to empower women and youth and to revive our economy.

We will pursue all this in partnership with civil society organizations and the private sector.

What Israel is seeking is to devour the maximum extent of Palestinian land with the minimum Palestinian demography at a time where in historical Palestine, from the Mediterranean Sea to the Jordan River, live around 13.5 million people, half of which or more are Palestinian and the other half are Israeli Jews.

Today more than ever the choice is clear and unequivocal, as stated by President Carter: Peace or Apartheid. Can the world tolerate a new apartheid? The Palestinian people will not tolerate oppression and injustice, and will continue to pursue their struggle against the colonial occupation of our land and people.

We will not abandon the culture of peace that is deeply rooted within us and we will continue to pursue peaceful popular resistance. We will not accept a future of walls, blockade, racial discrimination, oppression, hatred and colonialism.

The question of Palestine will remain the litmus test for the credibility of the international community and the effectiveness of the order that it established for upholding international law, maintaining international peace and security, prohibiting the acquisition of territory by force and supporting the right of peoples to self-determination, according to the pledges undertaken in the resolutions and international instruments it adopted.

Our people do not ask for more than what international law has granted other peoples around the world, but will not accept less.

The destiny and fate of our people is to live in freedom and dignity on the land of Palestine and there is no power on earth that can deny them from achieving this goal.