How many more projects would have been realised had Uhuru focused onBig Four agenda instead of BBI?

• Any sober adviser to the President should rightly advise him to take a back seat on who takes over from him.

• Getting soaked in the transition power play, in my view, is unhealthy, if our history remains our good point of reference. 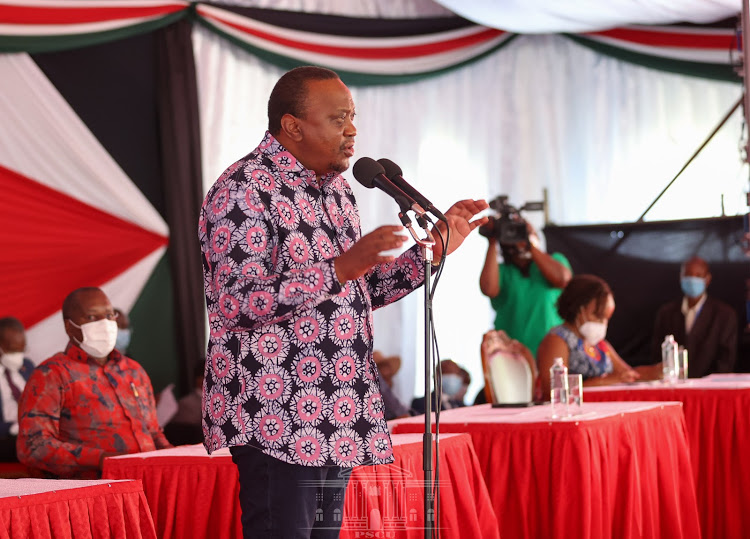 The framers of the 2010 Constitution ushered in Mashujaa Day celebrations, replacing Kenyatta Day.

There is no doubt the significance of Mashujaa Day was well-intentioned to create an all-inclusive honour for all heroes and heroines.

These were those who participated in the fight for independence and contemporary Kenyan men and women who have had outstanding achievements and contributions towards Kenya's wellbeing.

One will then be right to say Mashujaa Day celebration was intended to foster national unity and inspire equal honour and development.

The decision by President Uhuru Kenyatta to hold these celebrations on a rotational basis in different counties is plausible and he deserves credit for that.

In the eyes of many Kenyans, the object is to foster peace and national integration that Kenya is currently in dire need of, especially in the wake of heightened political engagements that are likely to threaten stability.

But even as Kenyans marked this year's Mashujaa Day, it should not be lost on us that what the founding fathers fought for has not been fully achieved in independent Kenya.

The land question remains unresolved in most parts of the country, among many more past and emerging challenges with unemployment topping the list of the challenges facing young people.

The conversation in the country now is how President Uhuru Kenyatta will conduct himself ahead of his exit from power. Will he be like Mwai Kibaki and let Kenyans decide their leader or will he get himself soaked in the transition politics?

Any sober adviser to the President should rightly advise him to take a back seat on who takes over from him. Getting soaked in the transition power play, in my view, is unhealthy, if our history remains our good point of reference.

The past elections have been divisive and threatened to tear this country apart and an sitting president should not be viewed as partisan in the succession politics.

The focus should have been on the Big Four agenda and Vision 2030. One thing that Kenyans remember President Kibaki for is his ability and commitment to rally Kenyans towards the implementation of Vision 2030.

There is no doubt that most of the capital intensive projects that have been undertaken for the last nine years owe their credence to the grand coalition government of President Kibaki and former Prime Minister Raila Odinga. It is time to compare what Kibaki did and how he conducted himself and how Uhuru is going to run this country for the remaining period.

Perhaps one landmark feature of the physical infrastructure projects by the Jubilee government is the Nairobi expressway that runs from JKIA to Westlands, besides the SGR which finds space amongst some of the key legacy projects by this administration.

Maybe we should be asking ourselves how many more projects would have been realised in this last term, had the President simply focused on the Big Four agenda,  the war on corruption instead of the BBI and its reggae tunes.

Perhaps what Kenyans will remember most about the just-concluded Mashujaa day celebration is the lifting of the dusk-to-dawn curfew, with the hope that their businesses will get a lifeline.

However, I appeal to Kenyans to take on this "freedom" with caution since the Covid-19 is still here with us. It was equally exciting to hear the president announce the decision to rollout the third economic stimulus package to revive the economy.

However, he should tighten the loose ends in his government to prevent some corrupt public servants from looting public coffers as his term enters into the homestretch.

Finally, it is Kenyans' concern and hope that the government will operate within its means to avoid seeking more loans that continue to plunge the country into a never-ending debt hole.

Any further borrowing will strain the next government and sink Kenyans into more taxation and push ordinary Kenyans into the poverty bracket.

President, deputy have not met since Madaraka Day celebrations in Kisumu last June
News
3 months ago