The DP is tracking Raila's movement in efforts to undo ODM leader's gains. 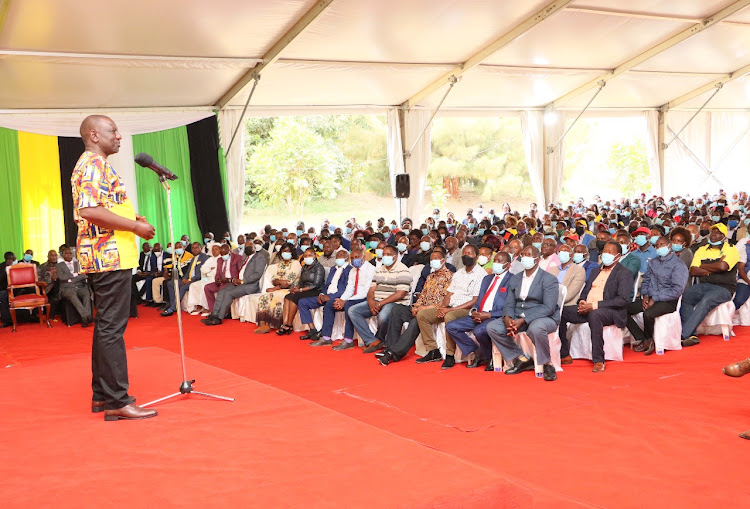 Deputy President William Ruto is expected in Laikipia county on Saturday for a one-day visit.

Speaking to Star, Ngobit MCA Robert Maina, popularly known as Roberto, said the DP meeting is expected to bring community leaders from the region together ahead of 2022.

In Nyahururu town, the DP is expected to hold a meeting with boda boda operators, mama mboga and Nyumba Kumi leaders.

“The DP visit in the area has been confirmed and he will visit the three constituencies in North, East and West on Saturday; in Nyahururu the DP will be in D ground; in Laikipia North, he will be in Naibo; while in Nanyuki, the DP will hold a rally at Nanyuki stage,” MCA Maina said.

He further said several members of the county assembly, among them, MCA Rumuruti Township, will attend. Hon Joseph Kipruto who is serving his second term will also help in coordination.

The DP's visit to Laikipia county comes a week after ODM leader Raila Odinga held a three-day visit to the area in what he called a people 's tour. Raila met four governors from Mt Kenya who announced their support for his presidential bid. The governors said they were in talks with the ODM leader to ensure the region benefits from his presidency.

Raila later met with officials from the Mount Kenya Foundation. He is wooing Mt Kenya with the promise of greater resource allocation and greater action to restore farmers’ fortunes.

Raila concluded the visit with stopovers at Narumoru, Chaka and finally Karatina in Nyeri county and a meeting with four governors from the region as he steps up efforts to woo the mountain. He rubbished the bottom-up economic model being propagated by Ruto.

Mount Kenya MCAs caucus chairman Charles Mwangi Ng’ang’a (Ichagaki One) told the Star on Wednesday that the DP is in a hectic campaign itinerary in which he appears to be tracking Raila's movement. He said the plan is to undo the inroads that Raila could have made in a series of political engagements.

Mathira MP Rigathi Gachagua recently told the Star that the DP and his brigade will not allow Raila to overtake them.

“The hustler movement is unstoppable. The DP has been part of Mt Kenya people for years now and over that period, he has endeared himself to the people, he has stood with us in times of need and participated in the development agenda of the region,” he told the Star.