Astroturf politics is absolutely anti-ethical to the pursuit of a well-informed citizenry.

•  Astroturfing campaigns manipulate and mislead the public into believing that a certain opinion and preference is shared by most people. 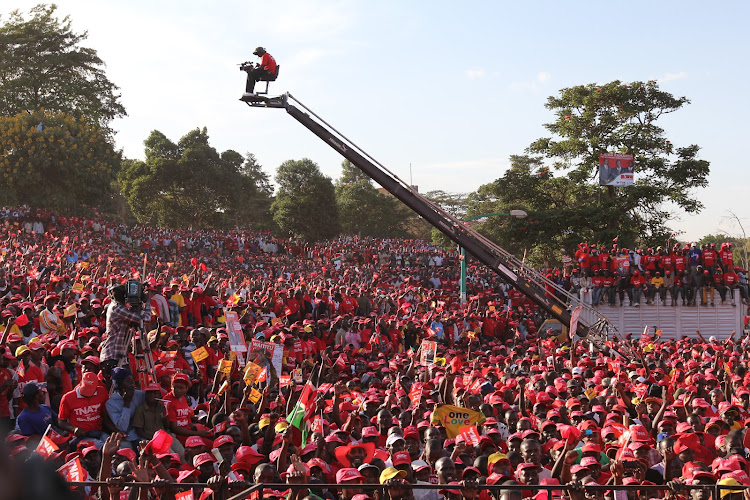 POLITICS: A crowd at Uhuru Park during a political rally
Image: FILE

Solomon Asch was an emeritus professor at the University of Pennsylvania and is considered a pioneer of social and Gestalt psychology.

His thesis was that human beings behave according to how they perceive the world, not how it actually is, and that their perception is as much affected by social influences as physical reality.

In 1951, he conducted his first conformity experiment to demonstrate the power of social influence, and to help understand why people conform and under what circumstances they will go against their own convictions to fit in with the crowd.

He gathered a group of eight male college students to participate in this experiment. Each participant was shown a card with a line on it, followed by another with three lines labelled A, B, and C.

Their order of seating and giving their responses was such that the real participant was placed at number seven. Each participant was then asked to say out aloud which line matched the length of the line of the first card. Ideally, it was expected that a near 100 per cent rate of correct responses would be given.

Solomon Asch repeated this experiment 18 times and each time, the real participant conformed and went along with the others to give a wrong answer.

When the real participants were interviewed after the experiment, they admitted they did not really believe their answers, but had gone along with the group for fear of being ridiculed, losing face, or simply because they wanted to fit in with the rest of the group because they believed the group is better informed than they were.

This has since been known as the Solomon Asch conformity test.

In politico speak, this is called astroturfing politics. It is an attempt to give the false impression that a certain candidate enjoys widespread grassroots support of the community, even when little such support exists. Astroturfing campaigns manipulate and mislead the public into believing that a certain opinion and preference is shared by most people.

As opposed to authentic grassroot support, which is generated organically, astroturfing campaigns are orchestrated by highly organised and well-monied groups that outsource crowds on demand to manufacture a false illusion of wide-spread grassroots public opinion favouring or opposing a particular candidate.

This false illusion commences by renting a crowd to give the appearance that a campaign is popular and well-supported. The effectiveness of rented crowds is based on the principle of the rational herd instinct.

Similar to the Solomon Asch conformity test, most people often abandon their own knowledge, information, research or obvious underlying evidence, beliefs and market fundamentals, if it appears that many other people are following a particular trend.

Rent-a-crowd recruits are paid and tasked with displaying enthusiasm, looking and sounding authentic, but without being too zealous to risk exposure. They are also the ones who seek out the media to express their opinions and undying support for respective presidential candidates.

With only a couple of months to go before the 2022 General Election, our social media accounts, television stations and newspapers have been awash with pictures of politicians perched atop their opulent cars addressing huge crowds.

The ensuing raging debate on social media and by political pundits has been to deconstruct the meaning of these optics, if the crowd puller is from their opposing political camp, and to flaunt the same, if it is their presidential candidate of choice.

If the presidential aspirant is from the opposite aisle, they have been very quick to remind us that large crowds do not translate into votes. If he is from their side, they unabashedly tell us that this is a mighty display of the bankable support their candidate is guaranteed.

These optics have also contributed largely to political party defections. As rationalisation for their party hopping, the defectors have justified their actions by saying the majority of their supporters want them to vie for a political seat through a particular political party. They call it ‘listening to the ground’.

And the presidential aspirants have not wasted this publicity moment. They have ensured they take pictures with the defectors and share them widely to broadcast their perceived political strength and attraction.

Being the peculiar Kenyans that we are, we have exploited an additional paradigm of astroturfing where we have rented social media influencers, cultural elders and tribal oligarchs as astroturf activists. In return they have endorsed respective presidential candidates and packaged them as the community’s best thing since sliced bread, their public pasts not withstanding.

What is not often public knowledge is that these endorsements do not come free, neither are they cheap. They are in exchange for rent seeking or office appointments once their preferred candidate captures power.

I submit that nothing draws a crowd like a crowd. And one showing enthusiasm for that matter. While it is true that astroturfing campaigns can alter public opinion or create doubt, they typically crumble and fail when confronted by facts, or when confronted by genuine organic grassroot support.

Deception and disinformation for the sake of political gain only serves to hurt any semblance of democracy. Astroturf politics is absolutely anti-ethical to the pursuit of a well-informed citizenry. It creates the chaos and alternative realities that provide access to authoritarians to flourish and rule over us. This confusion and manipulation of public opinion is precisely why sponsors of astroturf activists continue to rely on these unethical practices.

But as they say, all is fair in love, war and politics. Hence astroturf politics is here to stay. You can hate the game, not the player.

Finally, my unsolicited advice is to Wanjiku. When you change the way you look at things, the things you look at change. Likewise, the next time you bicker over the size of a politician’s crowd, or differ over political endorsements from self-appointed cultural elders and tribal oligarchs, or spend your scarce resources countering sponsored social media hashtags, just remember, chances that you are competing with paid astroturf activists, who have no conviction of what they purport to support, is extremely high. And never fight where you have no spoils.