• When he was removed as the National Assembly Majority leader on June 22 last year, he had no control over it. God was. 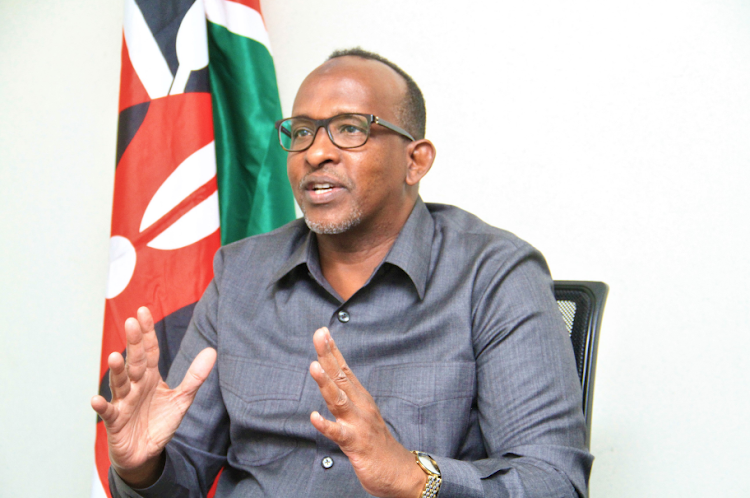 Garissa Township MP Aden Duale during an interview at his office on September 16
Image: EZEKIEL AMING'A

Garissa Township MP Aden Duale believes his destiny was long decided by God when he was in his mother’s womb.

So when he was removed as the National Assembly Majority leader on June 22 last year, he had no control over it. God was.

“My destiny is decided by God. When the time came, I am a man of prayer, I said, God has allowed me to serve long enough. I served for seven years and a half and only Speaker [Justin] Muturi served more than me,” Duale told the Star in an interview on Thursday in Nairobi.

Duale said he was prepared and even called President Uhuru Kenyatta, who was behind the purge of the allies of Deputy President William Ruto, and told him he was ready to step aside because “you seem to be under pressure”.

Duale, the first holder of the Office of the Majority leader under 2010 Constitution, was among the senior Jubilee Party leaders who were purged for their close links with DP Ruto.

Defending his record, Duale says he lost only one government agenda in his tenure and had a perfect working relationship and communication with the President and various stakeholders. He says he dedicated time and energy to the office he built from scratch to what it is today.

Among the tricks he used to pass government agenda was sending some MPs on trips, and introducing government business late in the evening when most MPs were tired or had left.

“If you read the history of this country, from Jaramogi to Tom Mboya, Pio Gama Pinto, George Saitoti, Mwai Kibaki and Moi himself by the Mt Kenya mafia to Raila Odinga being locked out of State House then come to William Ruto now, you realise the common denominator in Kenyan politics is deceit, betrayal backstabbing,” Duale said, adding that by the time he left office, he had performed to the best of his knowledge and capacity and was the most loyal Jubilee Party MP.

“But if my association and friendship with William Ruto would cause me to leave the leader of the Majority office, I was ready for it. I didn't want to become part of a group of cabal planning to undermine and humiliate the person and the character of Deputy President Ruto. We came from very far. So I was ready to pay the price,” he said.

“And I am lucky I left because there was no way I was going to support the BBI, even as the leader of Majority".

Duale has been in government and out, in and out again.

Born in 1969 in Garissa to a herdsman and brought up by the mother most of his life, Duale has not always been a politician.

He started off as a teacher albeit only for six months at Sankuri Secondary School, and became a businessman and at some point worked with USAID.

He started his schooling at a Catholic school in Garissa, Boystown Primary in 1975, proceeded to Garissa High School for his O-levels in 1982 and later joined Moi Forces Academy in 1986.

He was admitted to Moi University for a Bachelors Degree in Economics and History, where he studied alongside Governor Mwangi Wa Iria of Murang’a, Eldas MP Adan Keynan and Cherangany MP Joshua Kutuny.

After the short teaching stint, he started running his businesses in Garissa and Mombasa, largely in petroleum and commodity trading.

He worked with USAID between 2005-07 under the  Livestock Marketing Society of Kenya, which he was the CEO.  President Barack Obama visited the project in Wajir when he first visited Kenya in 2006.

This was just before he fully joined politics.

Duale had joined LDP when Narc was being formed and that when his relationship with Raila Odinga started. His first “proper engagement” with politics, he says, was in 2005 during the referendum campaigns.

He joined the Orange team because the region was for devolution, the Chief Kadhi courts and against extradition of Somali youths to Ethiopia and extrajudicial killings under President Mwai Kibaki’s government, which he had voted for in 2002. This was despite the Northeastern region being pro-Kanu.

Duale was elected Dujis MP on the ODM ticket in 2007 and succeeded Hussein Maalim.

He became Livestock assistant minister in the Grand Coalition Government until 2010 when they were fired alongside Ruto by Raila.

This, he says, was because they differed on the Mau issue, the extradition of the Somalia youths as Raila did not fulfil the pledge to bring them back and the failure to form the Livestock Insurance Fund, among other issues.

Despite the differences, Duale considers Raila a key figure in his political career.

“We were very close with the former Prime Minister since the time of the referendum. I can authoritatively say if there are two or three leaders I have learnt politics from, it is Raila, Ruto and Uhuru,” Duale said, adding that is why he doesn’t think there's any other serious 2022 formation apart from that of Ruto and Raila.

For him, Raila was his primary school of politics, while his secondary school was UhuRuto.

Asked about his differences with Raila, Duale says the ODM leader has since changed, particularly after the handshake.

“There are many reasons why we joined Raila. He had certain credentials. He fought for the minority, human rights, he was an anti-corruption crusader and used to compete on the platform of representing all Kenyans, not based on tribe. Of course, all these have been eaten up by the handshake,” Duale said.

He also reveals that Raila had promised him a Cabinet position, which he did not deliver because Yusuf Haji was the Minister for Defence from the PNU side and the ODM chief thus said it was not possible to have two ministers from the same region.

“ We realised there is a big difference between the Raila who is the leader of the opposition and the Raila who becomes a leader in government. Kenyans don't know this. And even as we go to the elections, most people must know Raila performs very well as opposition. When he gets a seat in government, he becomes a different animal,” Duale said.

When they left ODM, Duale “comfortably went back to the backbench” just as he did after the June 22 debacle.

He was among the people who formed URP that would become part of the Jubilee Coalition juggernaut that won power in the 2013 election.

At the time, he says, Duale was a very close confidant of Uhuru and Ruto and was a key player in the formation of the TNA and URP alliance.

That is how he ended up getting the Majority position that had been offered to Kalonzo Musyoka and Musalia Mudavadi but declined it because they saw it as a small and low position.

But he also notes his removal from the Majority post triggered a vacuum in the leadership of the Somali, and says it was unfortunate they didn’t replace him with a person from the community and instead picked someone from President’s backyard — Amos Kimunya.

He has a lot of clout, could team up with the Building Bridges crusaders.
News
1 year ago

“There are over 105 pastoralists MPs. I'm the patron of this parliamentary group and it is the largest political caucus in Parliament. I am sure there are men and women who could fit my shoes to be the leader of the Majority”.

“That was a slap on the face of the pastoralist community. And why are we worried about that? This is a country where today, the three arms of government are led by one community, the President, the speaker, the Chief Justice, the attorney general, the director of intelligence, the chief of defence forces,” he decried.

The father of five says he is writing his memoir, which he will publish next year. He is married to the daughter of former Chief of General Staff Mohamud Mohamed since Christmas Day, 1993.

He documents politics of deceit in the Jubilee administration and the party’s 10 years in power.

He believes that the hustler movement is forming the government.

His political plans? He says he might join the Executive or back to parliament, but will have to consult his constituents.