• The court managed not to decide a case about freedom of religion and the wearing of the hijab in school. Overall, it has had few human rights cases — not all encouraging 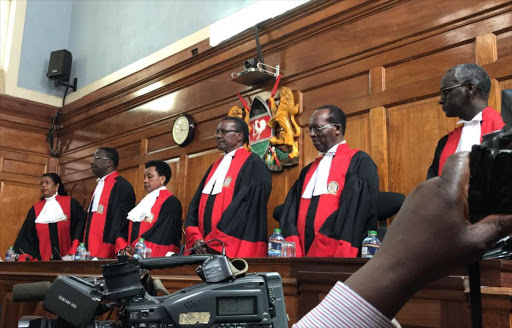 This year is turning out to be important for the Constitution’s recognition of economic and social rights in Article 43.

There have been a few earlier cases in the Supreme Court about human rights – such as Muruatetu on the mandatory death penalty for murder (involving the right to life). The court managed not to decide a case about freedom of religion and the wearing of the hijab in school. Overall, it has had few human rights cases — not all encouraging.

Article 43 says everyone has the right to certain elements of what we might call a decent life. Those listed are health, housing, sanitation, food, water, social security, and education. They are closely connected to other rights – like the right to dignity (Article 28) and to a clean and healthy environment (Article 42).

Something special about Article 43 is the statement that: “The State shall take legislative, policy and other measures, including the setting of standards, to achieve the progressive realisation of the rights guaranteed under Article 43”) Article 21(2).

Some people — including government officers — tend to think that the idea of “progressive realisation” is an excuse for doing nothing, and putting off any meaningful action into the distant future.

In fact, it is rather the opposite.

Historically, constitutions were mainly concerned with who gets into power. And this is what our politicians really care about. (You can see that from the BBI proposals. The Bill includes one totally unnecessary change to the Bill of Rights – maybe to show they care about rights also?)

The concept of progressive realisation does something relatively new for constitutions – it addresses itself to government policies, and their fulfilment.

On one level - and realistically - it implies that instantaneous achievement of full rights to health, housing etc is not possible. On another level it is saying: government must be constantly working towards the full realisation of those rights. So it addresses what government is in office for. And it creates legal duties – Article 43 is not just guidelines or hopes.

Various judges have emphasised this. Justice Isaac Lenaola (in 2013, when he was a High Court judge) said about the right to education:

The State must effectively use the resources available and not wait for increased resources before implementing the right to education. It is no excuse for the state to claim that one socio-economic right is subordinated to another. For example, that the right to basic education (and the laptop project for example) must override the right to housing. …There may be need for the Ministry of Education to adopt an incremental approach to implementation as is happening now but it needs a structure, publicised framework. …The [Ministry] can avoid an avalanche of litigation by setting out clear policies that are indicative of their appreciation that socio- economic rights are here to stay.

For cases to get to the Supreme Court is, therefore, important. It shows the law is really being used to protect these rights. And what that court says (at least what it says that is necessary to decide the case) must be applied by lower courts in future.

Justice Mumbi Ngugi decided these cases in the High Court, and decided in both in favour of the people who had been evicted, and awarded compensation.

In each case, the Court of Appeal rejected at least that aspect of Justice Mumbi’s decision. But the Supreme Court reinstated Justice Mumbi’s decisions. The judges were not the same in the two Court of Appeal decisions. In the Supreme Court, Justices Lenaola, Mohammed Ibrahim, Philomena Mwilu, Smokin Wanjala, and Njoki Ndung’u made up the bench in the recent case, and the same judges were in the earlier one, except that then Chief Justice David Maraga sat and not Justice Lenaola.

Mitu-bell Welfare Society v Kenya Airports Authority involved people who had been moved by government and relocated in a village on public land near Wilson Airport. The eviction was because they were on a flight path, and had been pursued, despite a temporary court order stopping it. No steps were taken to find alternative accommodation for them.

William Musembi v Moi Educational Centre Co. Ltd (this month) involved two informal settlements in Nairobi on what was originally public land. By the time the case reached court – following the eviction of the communities – the land was treated as private land, and the body that evicted them was a private school.

Earlier cases have made it clear that eviction must be carried out in what one might call a civilised manner. Additions to the Land Act in 2016 and 2017 Regulations under that Act also make this clear. Those regulations do not seem much respected. For example, “Evictions shall be carried out between 6.00 am and 6.00pm”. And “The persons taking part in eviction shall allow the evictees to carry with them their personal property and possessions. The persons taking part in eviction shall not destroy the property and possessions left behind involuntarily.”

The Supreme Court in Mitubell emphasised that, if people have lived on public land for a long time, though they may not be in any sense owners, they do get what the court called a “protectable right to housing”.

The court linked this, interestingly, to the Constitution and its concept of “public land” (not “government land” as in the past). People threatened with eviction may, therefore, go to court and get appropriate orders which, the court indicated, might include “the provision of alternative land for settlement.” And the court indicated that a factor in any order of compensation might include its being against a court order

However, the Court was clear that, while it was wrong, and unconstitutional, for a non-governmental institution actively to violate the right to housing and other Article 43 rights, they had no duty to take active steps to realise those rights. There is an interesting phrase: “in the present context”. Could it be different in other contexts?

The Court is saying the school had no duty to find other accommodation for the petitioners. But surely an awareness that they had nowhere to go must affect the extent of responsibility for the way landowners evict people. It is also implicit in the case that the state does have some responsibility for positively realising rights.

Both cases are positive in their recognition of the constitutional rights of even people often labelled “squatters” to be treated decently.

Also interesting to this reader’s mind is the criticism in Musembi of the government’s failures. The court comments that Bills on Evictions and Resettlement, and on Enforcement of Economic and Social Rights, have not been passed. Only the Land Act has approached the problems.

“The State has to take a more drastic and purposive approach to its mandate and obligations in ensuring that the rights to the people of Kenya are not violated, or in the very least, that these rights are not deprived or denied.”

It is reminiscent of Justice Lenaola’s comments in 2013. It is for the people and their lawyers to pick up this ball and run with it – asking the courts for orders intended to push government into taking that “more drastic and purposive approach.”

The courts are almost asking for the cases.