The struggle for expanded civic space and constitutional freedoms must continue.

• History has now repeated itself and the country today finds itself in the same place it was before the first Saba Saba, 31 years back.

• Those who fought for liberation then, including Raila and Orengo, are now on the wrong side of democracy. They are now fighting hard to reverse the gains made over the last three decades. 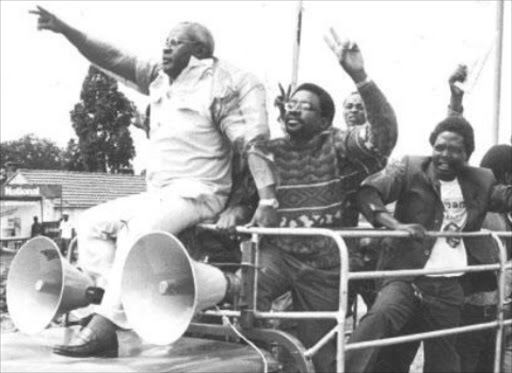 PIONEERS OF CHANGE: Kenneth Matiba, James Orengo, and other leaders stage a protest on July 7, 1990, a day that later came to be known as Saba Saba.
Image: COURTESY

This week, Kenyans marked Saba Saba (seventh day of seventh month). The Saba Saba of 1990 was the first time the country experienced open political defiance and public agitation for change.

It was a culmination of years of underground political organising for democratic rule, which had been met with stiff crackdown from the Moi regime.

Prior to the first Saba Saba, political dissent was countered with detention without trial, torture and in many cases, death. The dreaded National Security Intelligence Service was believed to be behind most of the atrocities committed against proponents of democracy in Kenya. Their favourite torture venue was the Nyayo House chambers.

There are many who suffered in the struggle for a democratic Kenya in the 1980s. The NSIS committed such cruel acts against those who dared raise a voice calling for change. While many died, survivors of the torture chambers spoke of being forced to watch as their spouses were raped in front of their eyes.

Others told of being kept in a cubicle of cold water at knee height days on end. Many others spoke of pins being pushed under their nails. All this treatment was on suspicion of being involved in the push for a free Kenya, for being guilty of calling for political pluralism and for demanding respect for human rights.

So finally, when Saba Saba happened and for the first time, in a public gathering, leaders could demand for democracy and change. It was a huge success that had cost lives and limbs. At the historical Kamukunji Grounds, leaders upon leaders of the second liberation took to the podium in front of thousands of hopeful Kenyans to call for a new Kenya.

It was the beginning of a new era of freedom of expression and association albeit in the face of intimidating security forces who were ready to pounce. Despite the risks and uncertainty, the Saba Saba rally happened and the country has never been the same again.

From then on, the movement for civil rights gained momentum. One year later in 1991, Section 2A of the Constitution, which declared Kenya a one-party state, was repealed thus introducing multipartyism in Kenya.

Kenyans could now form and belong to other political parties besides Kanu. The democratic movement for change did not stop there as the year after in 1992, Kenya held its first multi party elections. The opposition lost badly and realised more needs to be done besides multipartyism. The agitation for Constitutional reforms was thus born to usher in a new democratic constitutional dispensation.

Fast forward to 2010, Kenya promulgated a new constitution with promise and hope. The 2010 Constitution was proclaimed as one of the best in Africa. Many hoped that it would be the fulcrum of balancing the scales towards equality, human rights, good governance and rule of law. The dream was, however, not realised. While leaders pretended to be supportive of the Constitution, in actual sense, they were tearing it apart. By design, the political elite little by little deliberately failed its implementation. It is only until two years back after the handshake, did they openly declare their enmity of the Constitution and misadvised resolve to change it.

History has now repeated itself and the country today finds itself in the same place it was before the first Saba Saba, 31 years back.

However, the current situation is far much worse since those who gallantly fought for liberation then, including Raila Odinga and James Orengo, are now on the wrong side of democracy.

They are now fighting hard to reverse the gains made over the last three decades. They have chosen personal political interests over the people of Kenya. History has gone full circle and the country now yearns for new liberators to defend the Constitution, civil liberties and democratic governance.

It is for this reason that the Saba Saba movement must not be allowed to die. The struggle for expanded civic space and constitutional freedoms must continue.

Kenyans must relive the temperament of the gallant heroes and heroines of the 1980s who saved the nation from the dictatorship of Nyayoism. If we did it once, we can do it again. Long live the spirit of Saba Saba.