President also unhappy with how the Intergovernmental Authority on Development steered the peace process.

• The 11 were arrested after President Kiir accused his rival, Riek Machar, of launching a coup attempt on December 15 in 2013. 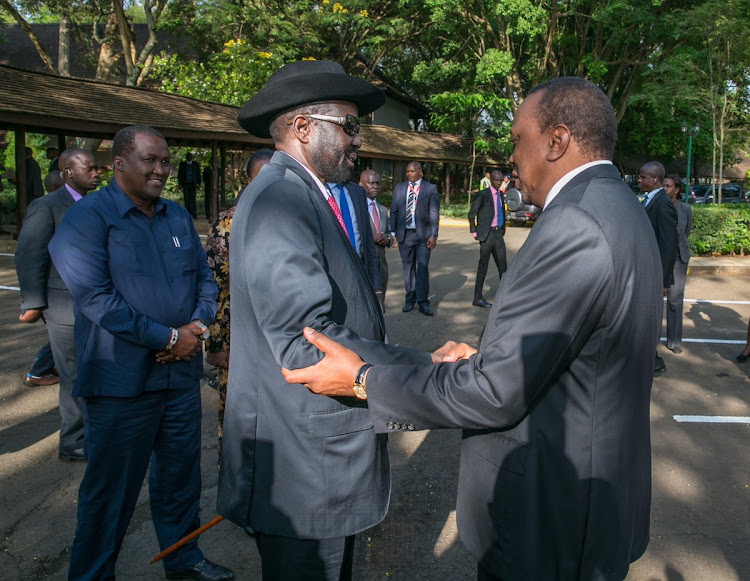 Kiir allowed the 11 detainees to travel to Kenya on the request of President Kenyatta, but says Nairobi treated them to a 'red carpet' welcome.

The South Sudan President was also unhappy with how the Intergovernmental Authority on Development steered the peace process.

“In the middle, Igad was not straightforward, and I am not happy with Igad leaders in the manner they have handled South Sudan,” he told Citizen TV.

He accused President Kenyatta of retracting on a promise to keep South Sudanese political detainees “safely” when he handed them to him in 2014.

“You know for Kenya, I am not happy because after the coup of 2013, President Uhuru took the lead that he was coming to take the leaders that I had apprehended during the coup. I told him, my brother, I cannot give you these people because they have to answer the charges on the role they played in the coup."

"But President Uhuru put himself in front of me that he will not allow them to talk a single political sentence, that he would keep them safe in his house until I am convinced that they did not do anything. And so we released them to you [Kenya],” Kiir said.

Uhuru sent then-Foreign Affairs Cabinet Secretary Amina Mohamed to Juba to collect seven of the 11 detainees. They had become a sticking point at peace talks.

The 11 were arrested after President Kiir accused his rival, Riek Machar, of launching a coup attempt on December 15 in 2013.

“I gave them to her [Amina] and she repeated what had been said to me by President Uhuru that these people will never appear in any political forum,” Kiir said.

What followed is what Kiir said annoyed him.

“In the evening, I switched on a Kenyan TV channel and found President Uhuru receiving these people on the red carpet, those who were supposed to be detainees. And I said, look at President Uhuru, if tomorrow I reject what he says, what will he tell me?”

Asked what Uhuru said, Kiir stated, “He said he was doing the right thing, or so he thought”.

Among the detainees were former Justice Minister John Luk Jok.

President Kenyatta said the release of all the detainees was the first step in the reconciliation process.

Kiir said he had warned Igad leaders that the situation in South Sudan would spill over to other countries in the region.

“And when it happened in Ethiopia, I told PM Abiy [Ahmed], what did I tell you ? The people who were very hard on me were the people who fought him in Ethiopia,” President Kiir told Citizen TV.

Kiir asked the international community to give South Sudan room to operate by easing the sanctions and lifting an arms embargo.

To implement the peace agreement, Kiir said they need arms for the unified security forces.

He said he has requested regional leaders to petition the UNSC to lift the arms embargo and allow South Sudan to acquire arms.

Despite the remarks, Kenya and South Sudan enjoy good relations, with President Kiir being invited to the 2019 national prayer breakfast.

Kenyans working in South Sudan have, however, witnessed hostility there.

In May, four Kenyan long-distance cargo truck drivers and two loaders were kidnapped by unknown gunmen at Terekeka town in South Sudan.

The kidnappers demanded 15 million South Sudan pounds (about Sh4.8 million) in exchange for the freedom of the captives.

In April this year, the Kenya Transporters Association warned all foreign truckers planning to drive to South Sudan against using Juba-Nimule/Yei highway due to the insecurity along the major roads.

The Ministry of Foreign Affairs said the attack against Kenyan truck drivers operating on the Juba-Namule Road had resulted in several fatalities and multiple injuries.

“The government advises Kenyans in South Sudan and particularly transporters using Yei-Juba Road to exercise increased caution and avoid use of this route where possible.”

“Kenyans in distress across South Sudan are encouraged to urgently seek consular assistance from the Embassy in Juba,” the Ministry said in a statement.

South Sudan Ambassador Chol Ajongo said he considers the reported cases of violence against Kenyans in South Sudan as isolated.