GHAI: It's not the job of Judiciary to be subservient to any government

Rigid interpretations of Constitution by judges can definitely be obstacles to progress.

• Lawyer Paul Mwangi sets out to discredit the Indian cases he believes underpin the recent High Court case here on the BBI.

• A Kenyan court is not required to follow an Indian court decision – or a UK one or anyone else’s decision. What makes a previous case useful is the force and relevance of its reasoning. 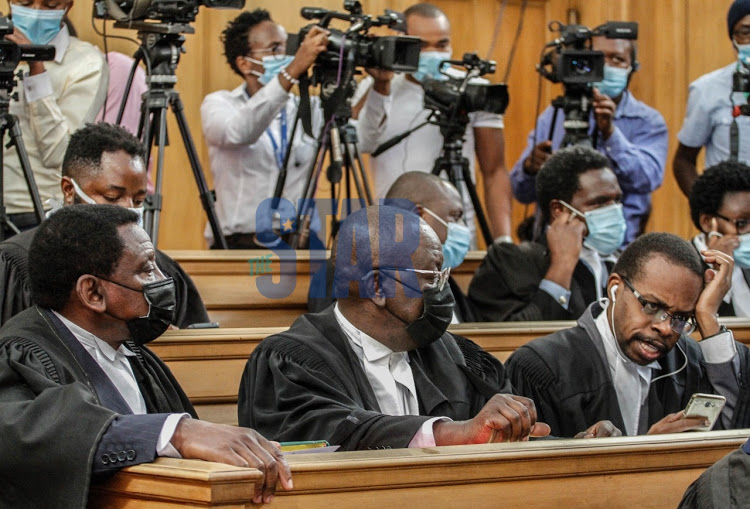 Building Bridges Initiative lawyers James Orengo, Paul Mwangi and interested party lawyer Charles Kanjama during the mention of the BBI at the Court of Appeal on June 2, 2021.
Image: FILE

Lawyer Paul Mwangi, in his article in the Star on Monday was right to say at times, the Indian judiciary has stood in the way of fulfilling the promise of the country’s Constitution — particularly over land reform.

It is a bit like the period when the US Supreme Court sabotaged President Roosevelt’s “New Deal” laws – with minimum wages, better working conditions, and maximum working hours – in the 1930s.

Narrow and rigid interpretations of the law and constitution by judges can definitely be obstacles to progress.

Mwangi sets out to discredit the Indian cases he believes underpin the recent High Court case here on the BBI.

He also wants to suggest that judges must be careful not to tread on the toes of politicians – or bad things will happen to the judiciary.

His story about the Chief Justice who participated in the Golak Nath case in 1967 – saying that fundamental rights in the Constitution could not be changed at all – and shortly thereafter stood as the opposition parties’ candidate for President, is true.

But do remember that the President is a non-political post and not that of head of government. It is true, however, that Justice Rao’s behaviour raised suspicion.

More important is that the idea of some fundamental parts (the basic structure) of the constitution being unable to be changed at all did not disappear.

It was not discredited. It was reborn in the Kesavananda case, which is used in our BBI case (while Golak Nath is not mentioned).

And Kesavananda is not discredited in India. Forty years after it was decided the Hindu newspaper – not some radical rag - described it as “The case that saved Indian democracy.”

About that case there are no suspicions, I believe.

Mwangi portrays the State of Emergency called by Indira Gandhi in 1975 as some sort of foreseeable response to the excesses of the Indian judiciary.

And he supports this with a quotation from a 2006 Indian case.

But wait a minute! The state of emergency was called by Gandhi in 1975 and lasted for two years. What happened between then and 2006?

Far from the Indian Judiciary being convinced by the emergency period that they had to steer clear of activism, the emergency is credited with spurring the most remarkable period of judicial activism in the country’s history.

The courts, especially the Supreme Court, created what is commonly known as public interest litigation or PIL.

On one view an element in this seems to have been a sense that the judiciary discredited itself by getting too supportive of the government.

A book by Indian scholar Anuj Bhuwania on PIL after the emergency published by Cambridge University Press a few years ago refers to the growth of PIL, and “the Supreme Court commonly seen as trying to undo the legacy of its capitulation to the political rulers of that period.”

On this view (which Bhuwania does not entirely share) the court was trying to repair its reputation in the eyes of the common person.

However, it must be said that much of the court’s activism has been in support of the rights of the downtrodden in society.

The Supreme Court developed a whole new way of approaching the courts for justice.

All sorts of traditional procedural rules and restrictions were relaxed to allow people or organisations to go to court to protect the human rights of the downtrodden when they could not go to court for themselves.

And the court has often portrayed itself as not wishing confrontation with the government but as simply getting the government to fulfil its own undertaking enshrined in law.

A good piece of advocacy but often not reflecting reality, for if the government wanted to do the right things it could have done so. And often protecting the rights of the downtrodden means precisely stopping the government from doing what it wants to.

The Supreme Court’s innovations inspired important articles in Kenya’s Constitution. Our Article 22 allows cases to protect human rights to be brought by people or bodies not themselves directly affected.

The idea is taken from the Indian Supreme Court developments. And we have gone further because the same approach is applied to other cases for violation of the Constitution not just of human rights (Article 258).

But the Indian courts have not given up insisting that the Constitution is respected even in non-human rights cases.

A media report in October 2020 alone examined eight current cases in which the “basic structure doctrine” was likely to be raised before the Supreme Court.

Courts have made decisions deeply objectionable to the government such as about when the national government can take over a state government’s functions.

These include one in 2016 that the Hindustan Times described as a “huge embarrassment” for the Modi government – reinstating a state government that Modi’s national government had removed.

Anuj Bhuwania wrote that “The Supreme Court and the state High Courts have emerged as enormously powerful judicial institutions in the aftermath of the Internal Emergency of 1975-77”.

Hardly a judiciary cowed by the realisation of its past over-stepping of the judicial mark!

That is not to say that there are no concerns about the impact of judicial activism. Are those who bring actions (and in India judges - who sometimes initiate cases themselves) really speaking for the people?

How far can and should courts go when government fails to act? Do activist courts actually encourage the government to remain inactive?

But that 2006 case that Mwangi quotes - including statements like “Judges must know their limits and must not try to run the Government” - is hardly a true reflection of the state of the Indian debate.

It came from two judges (the Supreme Court has many judges and they may sit with as few as two). Immediately the Chief Justice, sitting with another judge, had to clarify that what the two judges had said was not a binding legal ruling.

An article in the respected Economic and Political Weekly pointed out that the two judges said nothing new or useful. Of course, elements of government should not go beyond their powers.

(In Kenya we can see that whenever the executive or parliament does not like what a court has done they tend to say it has gone beyond its powers.) The author asked if the judges were saying that the judges should be submissive.

Judges should not succumb to threats, he observed. “The constitutional principles alone should be the guiding principles.” And he concludes that “a bold and active judiciary is a sine quo non [or essential] for a healthy democracy.” (Not from some radical but a lawyer for one of India’s most famous companies).

What am I really trying to say? First is that a country’s legal history – well, any history – is always more complicated than one might like to think if one is trying to draw some conclusions from it.

Second, the Indian courts have not been generally cowed into subservience to the executive and legislature.

I should perhaps add that recently there has been criticism in some Indian quarters of the Supreme Court for being too subservient to the current government.

That takes us to the third point: it is not the job of courts to be subservient to any government. Their job includes upholding the Constitution.

Should they refrain from doing that because they fear retaliation, in the form of reduced resources, savage criticism or (unconstitutional) obstacles to advancement, for example?

Four: definitely judges may go too far – just as Presidents, Prime Ministers and Parliaments may. But what is too far is going beyond what the Constitution requires or permits, not what government thinks is too far.

And finally, in truth, the peculiar political context of a particular foreign decision is not really relevant.

A Kenyan court is not required to follow an Indian court decision – or a UK one or anyone else’s decision. What makes a previous case useful is the force and relevance of its reasoning.