• Animal habitats are increasingly shrinking, and we are losing wildlife with the surge in population and ever-changing land use.

• There is enough evidence to demonstrate that land fragmentation is incompatible with wildlife conservation. 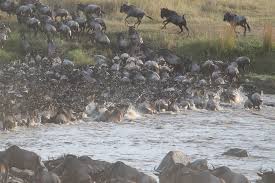 MARA DAY: The Great Migration of wildebeest and zebras is marked on September 15 every year as Mara Day.
Image: COURTESY

About 10 years ago, the Eastern Loita Plains shone in splendour. The plains played host to the spectacular Loita wildebeest migration that had between 100,000 and 250,000 wildebeests.

The migration moved east to west, crossing the plains several times as wildebeests followed rainfall and pasture. It was complete with predator drama coupled with a breathtaking landscape.

All that is gone, now a shell of its former self. What we see now is a shadow of the beauty we once beheld. The magnificence only remains etched in our memories because even if restored, it is not something we can most likely witness in our lifetime again. This is an example of how speedy degradation happens.

We, from the Greater Mara region, are witnesses of what happened at Loita. We witnessed as the plains once dotted with zebras, plenty of wildebeest and other wild species and herds of sheep started spotting fences. We have seen the once open fields chock with barbed wires arresting any free movement. We saw countless wildebeests, antelopes and even giraffes trapped in fences. Many of them died before help could arrive.

The Loita Plains story is not isolated. Animal habitats are increasingly shrinking, and we are losing wildlife with the surge in population and ever-changing land use. There is enough evidence to demonstrate that land fragmentation is incompatible with wildlife conservation.

Putting conservation land into agricultural use is the surest way to exacerbate human-wildlife conflict and lose our heritage. The Maasai Mara Ecosystem, for instance, is increasingly losing breathing space as the buffer zones are taken up by agriculture. We are seeing the Loita case being replicated as more fences emerge.

The changing land use is not the only challenge facing the ecosystem. Urbanisation of conservation spaces is also emerging as a real challenge due to increased human activities, thus driving away wildlife. This is aggravated by a lack of proper planning coupled with poor waste disposal. Taming urbanisation in conservation spaces and adequate management of urban centres is vital to conserving the habitats and quality of biodiversity.

Other underlying factors further complicate the equation. They include population explosion and land privatisation. Increasing population is a push factor for urbanisation, land sub-division and increased human activities in conservation spaces. As with privatisation, landowners do as they please with their property. Some of the challenges in this respect include selling land in small acreages that do not support conservation and subsequently fencing or putting land into agricultural use.

In essence, this means that proper management of conservation spaces cannot succeed without the involvement of individual landowners and communities. It is also imperative to note that individuals must find conservation attractive as alternative land use for them to get involved.

There is something we can do to reverse ecosystem degradation and restore rangelands for posterity. The different levels of government and the National Land Commission need to put in place policies and ensure strict adherence to the same to safeguard wildlife habitats. This includes providing guidance on land use, encouraging public participation in the management, protecting and conserving the environment, and eliminating processes and activities that are likely to endanger the environment as the Constitution prescribes. There is also a need to carry out full public awareness to enhance individual responsibility by citizens.

As we mark World Environment Day, choose to be helpful. Plant a tree. Keep that plastic bottle in your car until you reach your destination and dispose of it properly.

Stop directing effluent to the river. Bring that fence down to make way for animals to move freely. Construct a gabion to arrest further soil erosion. Teach a child the importance of conserving the environment. Set up a cleanup day for your estate or town. Do something now to make our planet a better place.