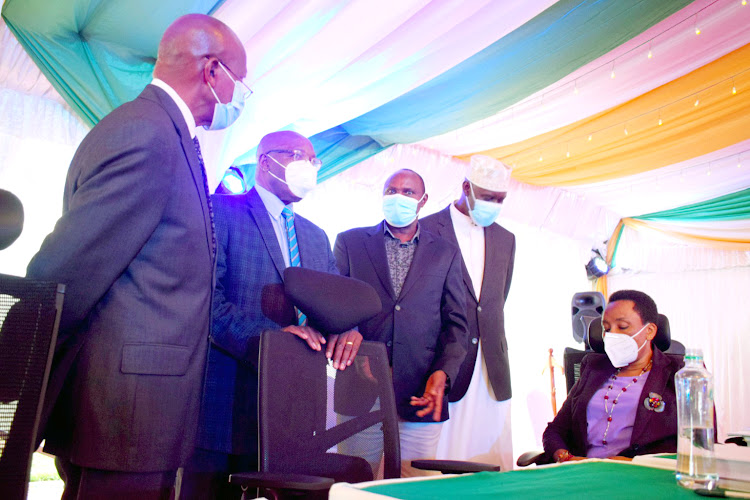 Judicial Service Commission commissioners after they announced their preferred candidate for Chief Justice at the Supreme Court on April 27, 2021.
Image: CHARLENE MALWA

Article 35 of the Constitution of Kenya

On April 26, 2021, leading public intellectual, human rights academic and Guru and chair of the Kenya Human Rights Commission, Prof Makau Mutua, joined by the Katiba Institute, applied to the High Court for an injunction against the Judicial Service Commission seeking to stop the JSC from announcing the new chief justice until a case he had filed in that court was heard and determined.

In this case Makau and the KI assert that the constitutional letter and spirit, especially around transparency, are in jeopardy following the JSC’s refusal to provide them with a panoply of information they had sought on March 4, 2021, under Articles 33 (1) and 35 (1)(a) of the Constitution of Kenya, 2010.

This matter being before the High Court, the JSC proceeded at lightning speed to announce their nomination of Justice Martha Koome as the next Chief Justice of the Republic of Kenya.

For the avoidance of doubt, the current IEBC chairman is Wafula Wanyonyi Chebukati and he was clearly not nominated on the basis of merit and the reason we know this was that the newspaper had an internal source that leaked this information. In the nomination panel, chaired by Bernadetter Musundi, were such eminences as Canon Karanja Mwangi, Pastor David Oginde, Prof Abdugafur El Busaidy, Mary Kigen-Sorobit, Tom Mbaluto and Evans Monari. How then are we shocked that his tenure has been so lackadaisical and lacklustre?

Again, even with the explicit provisions of the 2010 Constitution, the opaque official habit, tradition and ethos of daft secretiveness or sirikali (tough secret) still holds. One recalls a time when newspapers in government offices would be stamped “Confidential”!

In addition to Article 35 of the Constitution, several other laws and/or legal provisions embed and safeguard the Freedom of Information. These include Article 33 on Freedom of Expression, Article 10 on National Values and Principles of Governance, Article 232 on Values and Principles of Public Service and Article 2 (6) which allows for the automatic application in the Kenyan jurisdiction of international law when signed and ratified.

In addition, there is the Access to Information Act, 2016, which was assented into law on August 31, 2016. The objects and purpose of the Act include giving effect to the Constitutional Right to Information; to provide a framework that encourages pro-active disclosure by public and private entities; to provide a framework to facilitate disclosure by private entities; to promote the culture of openness through periodic and regular disclosures by public entities; make provision for the protection of informers; to provide for a framework within which public awareness on the right can be raised.

Information being power, it must be shared to the maximum level possible with the employer to ensure full transparency, accountability and that there is optimum use of that information to the public’s benefit (rather than in service of venal/personal interests. This is at the heart of the social contract theory that underwrites Kenya’s – and many other countries – constitution. The Covid-19 pandemic has served to reinforce the centrality of this constitutional principle.

At county level, Section 87 of the County Government Act, 2012 recognises that timely access to information, data, documents and other information relevant to policy formulation and implementation is one of the main principles influencing citizen participation in the management of the County government.

Section 96 in particular requires all county governments to enact an access to information law. So far in the country, a small number of counties have started to develop Bills on access to information such as in Bomet and Kisumu counties. In a bid to ensure harmonisation and uniformity of the county laws, in 2019 the Commission on Administrative Justice developed a guiding County Access to Information Law and Specimen Bill.

It should be noted that 90% of the world’s population is now living in a country with a Right to Information law and/or policy.

Why is it a Right?

A fundamental fulcrum in a functioning democracy is the employer/master – employee/servant relationship between the citizenry and their government respectively. Information being power, it must be shared to the maximum level possible with the employer to ensure full transparency, accountability and that there is optimum use of that information to the public’s benefit (rather than in service of venal/personal interests. This is at the heart of the social contract theory that underwrites Kenya’s – and many other countries – constitution. The Covid-19 pandemic has served to reinforce the centrality of this constitutional principle.

“Accurate timely information is one of the most valuable commodities during a health emergency or disaster” says the World Health Organization. Yet the cavalier manner in which the Kenyan government has handled information during the pandemic provides a classic example of how not to manage a pandemic in this regard.

During a pandemic, non-disclosure of information causes a serious threat to public health therefore, ensuring the right to information is a necessary response to the Covid-19 pandemic. Reliable, accurate and accessible information about the pandemic is essential to reducing the risk of transmission of the virus and to protect the population against dangerous disinformation in the government actions. Being open helps ensure public trust and accountability.

On February 26, 2020, a Kenya Airways employee and whistle-blower, Ali Gire, recorded and shared a video of a China Southern flight CZ6043 from Changsha-China, which landed at JKIA plane carrying 239 passengers. All the passengers were allowed into the country and asked to self-quarantine.

While some say that what one does not know will not hurt them, what we are learning is that without information, we are sitting ducks to not just the perils of the pandemic but also the consequences of our own ignorance.

When the video went viral, Ali was issued a suspension letter accusing him of breaching staff conduct guidelines. Protection for whistleblowers is one of the key principles of Access to Information. Individuals who release information on wrongdoing – whistleblowers – must be protected from any legal, administrative or employment-related sanctions or harms. Although Gire went to court and managed to successfully challenge his suspension, the damage had already been done.

The Public Order (State Curfew) Order, 2020 – issued by the Ministry of Interior and Coordination of National Government – ordered a countrywide curfew ‘during the hours of darkness between seven o’clock in the evening and five o’clock in the morning with effect from March 27, 2020, and which was to remain in force for a period of 30 days thereof’.

The government did not provide adequate information on how this directive was to be carried out, including legal punitive measures in the event one contravened the directives. This resulted in widespread violent enforcement of lockdown through police brutality.

According to the Independent Policing Oversight Authority, at least 20 people were killed by officers during the first nine weeks of curfew alone. There were also allegations of shootings, robbery, harassment and sexual assault by police officers. The quarantine centres were now being used punitively as detention centres for anyone caught by the police flouting the directives.

The failure by government to respond to Access to Information requests to provide data supporting the implementation of mandatory quarantine, the rationale for extending quarantine beyond 28 days, the rationale for mandatory quarantine as punishment for those who allegedly commit curfew offences and information on the support that the government was providing to healthcare workers resulted in a petition by KELIN, Katiba Institute, Transparency International Kenya and 10 other petitioners to highlight to the Constitutional Court how the failure and refusal to provide timely and accurate information violates the right of access to information, the right to life, the right to health, the right to equality and non-discrimination and the right to freedom and security of the person in the Constitution of Kenya, 2010.

Other areas where the lack of information has been evident has been in the procurement scandal of medical and personal protective equipment, otherwise called the Covid-19 billionaires scandal, the dearth of transparency in distribution and management causing vaccine hesitancy and the confusion around the third wave of the pandemic, which ultimately resulted in Office of the President operatives having to scramble to clarify the President’s speech after he made an announcement that caused more heat than light.

While some say that what one does not know will not hurt them, what we are learning is that without information, we are sitting ducks to not just the perils of the pandemic but also the consequences of our own ignorance.

Mugambi Kiai is the Regional Director of Article 19 Eastern Africa while Sarah Wesonga is the Program Officer, Transparency