Uhuru pursues Suluhu: Why Kenya is dying for a new chapter with Tanzania

• On Saturday, through a message, Uhuru assured President Hassan that Kenya is ready to cooperate with Tanzania and extended an invitation to her to Kenya.

• The following day, Hassan was in Uganda for a one-day visit; it was her first international trip as president. 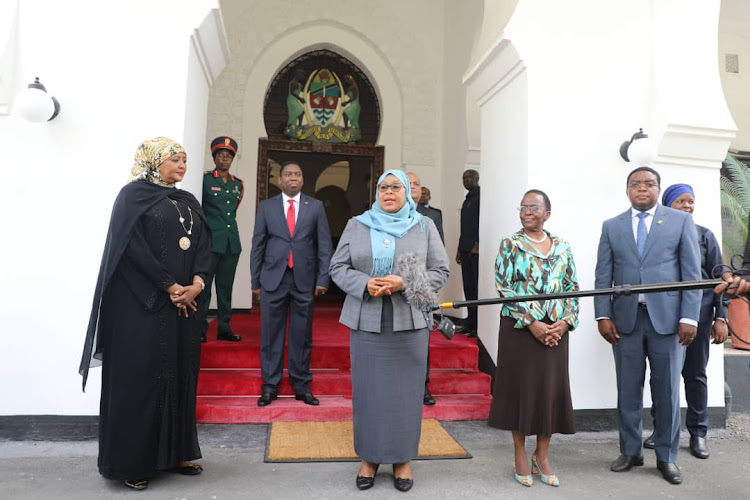 During the visit, Sports CS Amina and President Hassan discussed the intent to enhance relations between Tanzania and Kenya, which have been hostile in recent years.

A statement by State House Dar es Salam director of communications said President Hassan assured Uhuru of her readiness to continue the good things that were underway during her predecessor John Magufuli’s administration.

She said they will solve challenges between Kenya and Tanzania because the two East African Community states are siblings and historical friends.

In this regard, President Suhulu called on ministers and experts from the two states establishing the Joint Permanent Commission, who have not met since 2016, to immediately meet and find ways of improving the ties.

“There are many other issues we will engage diplomatically through diplomatic channels to improve our relations. The message was that Kenya is ready to enhance our ties and work with us,” President Hassan told the media after the meeting.

Uhuru assured Hassan that Kenya is ready to cooperate with Tanzania and extended an invitation to President Hassan to Kenya.

The following day, Hassan was in Uganda for a one-day visit. It was her first international trip as president.

Presidents Yoweri Museveni and Hassan witnessed the signing of the East African Crude Oil Pipeline project agreement, paving the way for the construction of a 1,440km crude oil pipeline from Uganda's Albertine region to Tanzanian seaport of Tanga.

The signing was set for March 22 but was postponed following the death of Magufuli.

Hassan assured Museveni that her government will continue enhancing their relations, including seeking new areas of cooperation. Museveni, for his part, termed the signing of the deal as "the third victory for Uganda and Tanzania".

The pipeline deal effectively means Kenya's plans to jointly set up an oil pipeline with Uganda have gone up in smoke.

In 2014, Kenya, Uganda and South Sudan had agreed to set up the Uganda–Kenya Crude Oil Pipeline with South Sudan joining the project at its Unity State as an alternative to its only current oil export route through Port Sudan. In 2015, however, Uganda opted to partner with Tanzania, saying it was cheaper.

Museveni said the decision to opt for the Tanzania route was based on economic benefits and acknowledgment of Dar's role in the removal of Idd Amin and as well as proof of friendly cooperation.

Why the bid to reach out to Tanzania under Hassan's administration?

Speaking in Dodoma during the state funeral service for Magufuli, President Hassan promised to enhance Tanzania's ties with regional states.

Unlike Magufuli, who was inward looking, Hassan appears ready to reach out. She is not new to regional or international diplomacy, having been delegated the function of representing Tanzania in most UN, AU, SADC and EAC meetings.

“We don’t want to go alone,” she told Mulamula during her swearing-in.

However, African Affairs Editor at China Global Television Network Douglas Okwatch says Hassan's policy is one of continuity rather than a shift.

He said the two countries share a history, where Tanzania has played an interventionist role in Uganda's political affairs in times of crisis.

"I think Kenya, its regional economic prowess—which elevates its leader as the region's leader—serves to repel Uganda as this clashes with Museveni's own regional power interests. In Kenya, therefore, Museveni may be happier playing political spoiler," Okwatch said.

International relations lecturer Dr Kigen Morumbasi  told the Star that as an anchor state, it is in the interest of Kenya to have cordial and beneficial ties with its neighbours.

"The recent meeting between the Uganda and Tanzania heads of state was expected due to the progress that had been achieved by President Museveni of Uganda and former Tanzania President Magufuli," Dr Kigen said on Thursday.

He teaches at Strathmore University and  is a visiting lecturer at the Rwanda Defence Force Command and Staff College. He is also chairman of  the International Relations Society of Kenya.

Noting that the Tanzania-Uganda meeting was set earlier, Dr Kigen  said for Uganda, it was formalisation of earlier resolutions while for Kenya, it was to signify goodwill for cooperation with President Hassan.

On the implication of the Uganda-Tanzania deal on the region, Kigen noted that it will likely bring in new state and non-state actors.

"The planned oil pipeline will provide alternatives for other countries in the region such as South Sudan and DR Congo. This is ushering and era of sea port diplomacy in the East Africa region, with Tanzania and Kenya emerging as strategic countries," he said.

"At the regional level, Kenya has also established an agreement with Ethiopia on the Eastern Electricity Highway".

Uhuru has invited Suluhu to visit Kenya.
News
2 months ago

She had been representing Tanzania at UN, AU, SADC and EAC meetings held outside the country
Siasa
2 months ago
by ELIUD KIBII Subeditor and writer
Siasa
18 April 2021 - 05:00