There are glaring structural issues with media ownership, with only 8.1% of media houses being run by women

• The choice of topics in the news is critical to how women consume and produce or comment in the media.

• Even when it comes to the production and commentary of news stories, women are felt more by their absence, rather than their presence 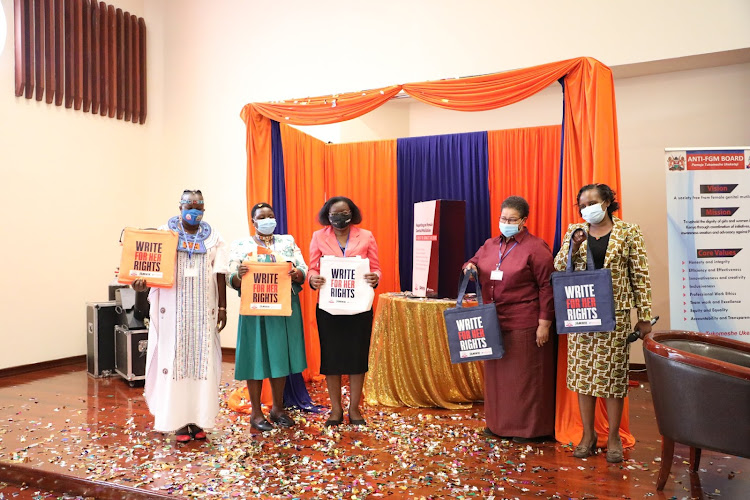 Association of Media Women in Kenya, Equality Now, UNICEF and Anti FGM Board officials pose for a picture after the launch of journalists toolkit in Nairobi
Image: PHILOMENA KILONZO

The timing of Patricia Andago’s startling but altogether disheartening conclusion in her online post Big Dick Politics and how the news fails women was uncannily a propos: It appeared a day before a concerning incident where two presenters and a DJ at Homeboyz Radio made remarks that intrinsically justified or rationalised violence against women. This incident went viral in a heated online debate that eventually saw the dismissal of all three individuals.

The convergence of Andago’s post and conclusion and the HomeBoyz Radio incident crystallised a nagging yet formidable concern that media practitioners and watchers have constantly grappled with: What role do women play in the media in Kenya?

Women in Kenya’s media are, in the main, invisible and, when visible, are largely objectified, pilloried, harangued, harassed and bullied. Sadly, this covers most dimensions pertaining to women in the media in Kenya – whether it is as consumers, producers, employees and managers of the news, irrespective of whether it is print or digital.

Andago presents her case having, in 2020, polled 4,000 consumers and interviewed 25 women in rural and urban Kenya on their media consumption habits. The respondents were asked questions about how they interacted (or didn’t) with the news, their attitude towards it and how much impact it has on their lives.

Her conclusions, such as this one, invariably induce that dull, lingering ache of a malignancy:

‘…despite the urgency of the news, women lagged behind in terms of news consumption… Additionally, they were more likely to report being avoiders of the news media at a rate of 53 percentage points higher than men. Given how important news is to our young democracy and consumer economy, these differences in news consumption have important implications…’

Clearly, the choice of topics in the news is critical to how women consume and produce or comment in the media. Even when it comes to the production and commentary of news stories, women are felt more by their absence, rather than their presence. In the production of news, women are normally assigned roles or stories that are considered “soft” while the “hard -nosed” stories and roles are essentially dominated by men.

Andago relates the illuminating case of Kenyan author and journalist Joan Thatiah whose work desk used to be referred to disparagingly as “desk ya wamama” (the women’s desk) where “women’s stories” and not where news were written. This led her to realise that the highest rank she could ever attain in print media was the managing editor of a pullout for women.

There are glaring structural issues with media ownership in Kenya, with only 8.1 per cent of media houses being run by women. Effectively, women lack the requisite power or influence to create a better balance in the choices made on the topics to be offered by the news media. There are also social issues at play. News timing does not take account of the fundamental difference in how men and women interact with the 24 hours.

Alarmingly, the workplace for women journalists presents additional onerous burdens to their safety, security and well-being. There is the ugly specter of sexual harassment with the November 2020 Media Council of Kenya report indicating that 73 per cent of female journalists are likely to experience sexual harassment.

A 2016 joint report by the Association of Media Women in Kenya and ARTICLE 19 Eastern Africa, Women Journalist’s Digital Security, noted the predicament of women in the digital space indicating that 75 per cent of the journalists interviewed had experienced online harassment in the course of their work:

‘Technology assisted violence against women (TechVAW) is on the rise and includes cyber bullying, trolling, cyber stalking, defamation/hate speech, online harassment, public shaming, identity theft, hacking amongst other offences. Yet media practitioners rely heavily on the internet to source and share information. The bolder, louder and [more] visible a woman journalist is, the more the probability of facing TAVAW.’

As subjects of the media, women in Kenya take a further beating. In the case of Homeboyz Radio, on Thursday, March 25, 2021, three radio hosts — Shaffie Weru, Neville Muysa and DJ Joe Mfalme — on the morning show, Lift-Off discussed and reacted to the case of Eunice Wangari Wakimbi.

She was reportedly thrown off the 12th floor of a building for rejecting her companion’s sexual advances. Shaffie, described Eunice’s experience to his co-hosts, before stating, “I’m calling on all the ladies, this is 2021... you guys need to play hard to get. You need to be unavailable. You cannot be ladies who are being called to drink gin, and you live 40 kilometers away… then bring yourself to him.”

In the immediate public storm that followed, the three presenters were at first suspended and then fired. But they were not without their defenders who argued that these comments fall under the rubric of protected speech. Yet by rationalizing or justifying violence against women, the three had clearly stepped away from the confines of what is protected speech. This is more so in a situation like Kenya’s where after the introduction of Covid-19 measures in March 2020, the National Council on the Administration of Justice noted a significant spike in sexual offences in various parts of the country.

Sexual offences constituted 35.8 per cent of all the criminal matters reported between March 18 and April 1. According to the National Bureau of Statistics, 14 per cent of women between the ages of 15-49 years have experienced sexual violence.

Kenya’s Ministry of Health was reported in August 2020 to have received at least 5,000 cases of sexual violence from across the country, 65 per cent of which involved girls younger than 18 years.

Clearly, the question of how the Kenyan media treats women is one that requires serious thought and intervention structurally, strategically and operationally across the different dimensions of the media. For how can we loudly protest the gagging of the media while the majority of society remains muzzled by invisibility?