Cyrus Oguna: Drought does not cause famine; bad politics does

Undoubtedly, drought is a harbinger of famine.

• Government spokesman Cyrus Oguna has warned that nearly 1.4 million Kenyans are likely to starve due to a looming drought caused by depressed rains.

• Nations with strong economies and accountable political structures have successfully responded to the advent of drought in their countries. 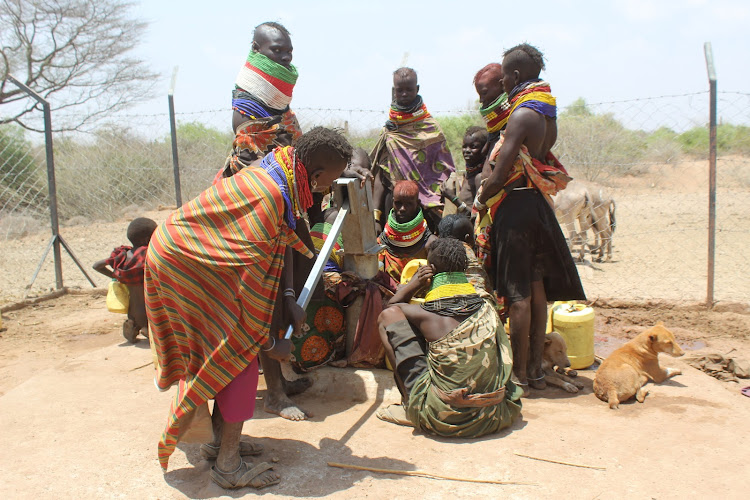 Residents of Liwani in Turkana North scramble for water at Napus water point as drought and hunger continue in the region
Image: HESBORN ETYANG

The worst famine in history occurred in the 19th century. This was the Great Irish Famine of 1845. A fungus-like organism called phytophthora infestans spread rapidly throughout Ireland. At the time, the Irish population relied heavily on potatoes for sustenance.

The infestation of the disease ruined the potato crop that triggered mass starvation that lasted for eight years. Consequently, Ireland experienced a mass exodus, with upwards of two million people fleeing the country. At its conclusion, 1.5 million Irish were dead.

Theories have been advanced that the cause of the deaths was the famine because the Irish were excessively dependent on the potato. Hence, millions died when the blight ruined their only food source.

But had this theory been entirely true, UK Prime Minister Tony Blair would not have had to apologise in 2011 for something that happened ecologically 150 years ago. At a weekend festival in County Cork to commemorate the famine, a letter was read out from the Prime Minister in which he blamed “those who governed in London” at the time of the disaster.

The apology read in part, “That more than a million people died in what was then part of the richest and most powerful nation in the world, is something that still causes pain as we reflect on it today. Those who governed in London at the time failed their people at their hour of need”.

So, what caused the millions of deaths, if it was not the famine that was a result of ecological factors?

The cause was England’s long-running political hegemony over Ireland. Ireland was governed as a colony of Great Britain until the early 20th century. The English had conquered Ireland and taken ownership of vast agricultural territory.

These English landowners in turn hired farmers to manage their holdings. The mangers then subdivided the land and rented small plots to the local Irish population. Competition for land made the managers subdivide the land further into smaller and smaller sections that resulted in higher rents, thereby squeezing the Irish to subsistence. The Irish had no rights to the land they worked, or to any improvements they might make.

The British Parliament was well aware of the plight of the Irish. But while the Irish starved, the wealthy landlords were exporting large crops of oats and grain to England. Many believe many lives could have been saved if the British had banned those exports and kept the crops to be consumed in Ireland. But the Whig Political Party, which at the time had control of the British Parliament, refused to ban the food exports. They also shut down food depots that had been stocked with Indian corn.

Other nations stepped in to help. One was the Sultan of Turkey, who initially offered £10,000 but the British Consul in Istanbul told him that it would offend royal protocol to send more money than the British Queen, who had earlier donated £2,000.

The Sultan reduced his donation to £1,000. He tried to compensate for his reduced monetary donation by sending two ships to Ireland, laden with food. However, the British government refused to allow the ships to dock in either Cork or Dublin.

Safe to say, bad politics, poor governance, and political hegemony, and not the potato disease, led to the death of millions of the Irish population.

A couple of days ago, Kenya’s government spokesman Cyrus Oguna warned the nation that nearly 1.4 million Kenyans were likely to starve due to a looming drought caused by depressed rains.

Oguna went on to cite that the most affected areas were the arid and semi-arid counties of northern Kenya. To mitigate this dire situation, he assured the country that the government had initiated intervention measures such as cash transfers, distribution of food and drought resistant crops and fertiliser to farmers. He also appealed to the development partners to provide additional aid.

Begs the question, is the looming starvation caused by drought from depressed rains or similar to Ireland, is it caused by those who govern the people that are at risk of starvation?

Undoubtedly, drought is a harbinger of famine. But it is not the cause. Famines largely occur in places where people are tyrannised either by bad politics, poor governance, or private militia. They occur in places where the lead up years to the famine is characterised by insecurity, misallocation of resources, neglect, poor infrastructure, and low development in education and health.

Nations with strong economies and accountable political structures have successfully responded to the advent of drought in their countries. For instance, most of Europe is always covered in snow for at least three months every year without fail. It is called the white drought. Yet, they do not declare a famine emergency and calls for food aid.

Kenyans have been indignant at this warning by Oguna. And rightfully so. But the more fundamental question we should pose is, what have the political actors done to address the perennial drought? Allow me to unpack this further using a hypothetical county called Amber as a case in point.

The average cost of drilling and equipping a borehole roughly 75 meters deep, is Sh1.7 million. Its output is approximately 15,000 litres per hour. In one day, this translates to about 360,000 litres. A family of eight to 10 people, including 10 cows, would consume roughly 300 litres per day. This means that in one day, one borehole would adequately serve 1,200 families. This is 12,000 people and 12,000 cattle in one day.

For each annual allocation of CDF, each MP in Amber county can drill 82 boreholes per year, which would in turn serve 984,000 people, and a similar number of cattle daily. This is enough water for human and livestock consumption, and irrigation of crops all year round.

So, what has caused the looming starvation? Is it the drought occasioned by the depressed rains, or is it the tyranny of bad politics, poor governance and misallocation of resources? Like Ireland, have the people facing starvation been let down by those that govern them? If a portion of the CDF resources were to be channeled towards provision, storage and utilisation of alternative sources of water, would we be facing this perennial disaster? You be the judge.

I submit that we should expand our jurisprudence to align with Hammurabi’s law. One of the laws states that if a builder builds a house for a man and does not make its construction firm, and the house collapses and causes the death of the owner, that builder shall be put to death. And if it causes the death of the son of the owner of the house, they shall put to death the builder’s son.

King Hammurabi’s laws had three important concepts — reciprocity, accountability and incentives. In today’s lingo, King Hammurabi would gladly tell us that we don’t get to walk away from the risks we have created for others. We need to own our risks.

Finally, my unsolicited advice to Oguna is that do not blame the shadow for the shape of your body. Likewise, do not blame drought for the looming starvation. Like the Hammurabi builders, those in respective public offices that ought to have provided alternative sources of water with our taxes should not get to walk away from the risks they have created for others. They and their co-conspirators and accomplices should solely own their risks and the outcome.

Politicians are people who when they see a light at the end of the tunnel, go out and buy some more tunnel – John Quinton