No, Ruto, you are no Magufuli

There is nothing in Ruto’s background that speaks to him caring about hoi polloi any more than the next politician does. 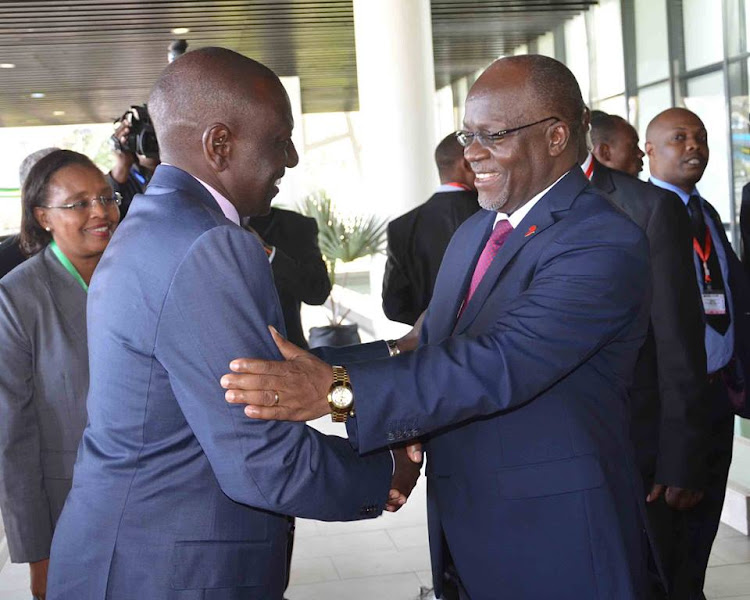 Deputy president William Ruto when he was received in Tanzania by the late President John Pombe Magufuli
Image: COURTESY

Few disagree the late Tanzania John Magufuli had a unique appeal to the masses who saw him as the saviour to deliver them from abject poverty.

Magufuli tapped into this populism in the early years of his presidency to implement stern policies aimed at eradicating corruption and government waste, which was music to the populace that loved every bit of it.

What was unique in Magufuli’s populist presidency was the fact he did not use populism as his means to ascend to the presidency in 2015. Rather, he was a compromise candidate for the Chama Chama Mapinduzi .

Many observers, including power brokers within CCM, opine that Magufuli represented a safe pair of hands to continue leading in CCM’s dominance. This was particularly desirable because Magufuli had distinguished himself as a no-nonsense Cabinet minister.

It was upon his election as president that Magufuli endeared himself to the hoi polloi in Tanzania and their love for him was self-evident during his burial ceremonies where tens of thousands of them lined up the streets to bid him farewell.

Populism is nothing new or recent in politics. While in some cases it has led to ushering in leaders who did far much better in delivering for the “common” person, history is replete with examples where that has not been the case.

Perhaps there will never be a more vivid example of the latter than what happened in the US in 2016 when now former President Donald Trump combined his racist and anti-immigrant rhetoric with anti-establishment rhetoric and conmanship to the presidency.

Despite his riding into power as a populist to save the hoi polloi, he only used the office to enrich himself and reward his cronies.

That is what lies ahead if Kenyans make a mistake and allow to be fooled by our version of Trump trying to ride on the populism based on hatred of Raila Odinga in certain parts of the country and giving false promises being the deliverer of Wanjiku from her misery. He will not do such.

In other words, Deputy President William Ruto is no Magafuli.

First, unlike Magufuli, Ruto has allegedly amassed great wealth courtesy of his being in government or association with those in government.

Second, the love and admiration of the hoi polloi for Magufuli was organic, meaning, people simply gravitated to him because of what he was doing as president to fix chronic problems suffocating the country.

Ruto’s so-called populism is nothing but a choreographed greasing of politicians pockets who go singing praises and creating the illusion the masses are with him when, in fact, that is not the case.

In sum, there is nothing in Ruto’s background that speaks to him caring about hoi polloi any more than the next politician does.

Indeed, were one to line up all the top likely contenders of the presidency and examine their record on what they have done for the poor and betterment of the country, only one candidate stands out and it is not the man from Sugoi.

So, Kenyans be smarter than falling for ploys intended to propel one to the highest office in the land and see him and his cronies enjoy the privilege while you are left languishing in the same miserable or difficult life.

DP says Magufuli was always powered by the courage of his convictions.
News
4 months ago
by SAM OMWENGA Legal Analyst and Political Commentator
Siasa
27 March 2021 - 11:00