No consent to harm yourself: Fight against female genital mutilation in Kenya continues

• Dr Tatu Kamau filed a petition at the High Court challenging the constitutionality of an Act prohibiting FGM,

• She contended the Act, which made female genital mutilation (or cutting) (FGM/C) a crime, in effect denying adult women the right to choose to undergo FGM. 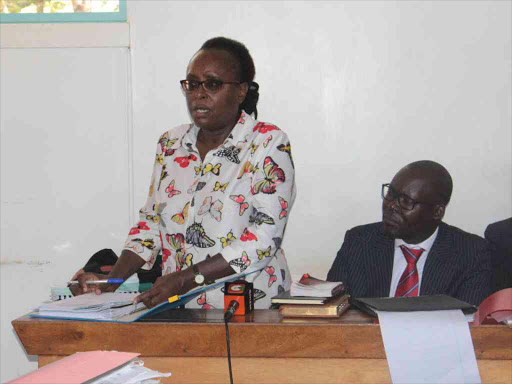 FGM PROPONENT: Dr Tatu Kamau who filed a petition at the High Court in Machakos challenging the constitutionality of the Act prohibiting FGM. She lost.
Image: FILE

However, less than six years later, a female medical doctor, Tatu Kamau, filed a petition at the High Court in Machakos, against the Attorney General, the Anti-Female Genital Mutilation Board (the Board) and the Director of Public Prosecutions. She challenged the constitutionality of the Act as well as of the Anti-Female Genital Mutilation Board established under the Act.

Her main issue was that the Act, which made female genital mutilation (or cutting) (FGM/C) a crime, in effect denied adult women the right to choose to undergo FGM.She said this was contrary to their right to practice their own belief and right to culture.

The case attracted a lot of interest with over 10 interested parties and two amici curiae (friends of the court) being accepted by the court. Because it raised "a substantial question of law” under Article 165(4) of the Constitution, the Chief Justice appointed a three-judge bench (Justices Lydia Achode, Kanyi Kimondo and Margaret Waringa Muigai) to decide it.

On March 17, 2021, the High Court delivered a landmark judgment. It dismissed Dr Kamau’s petition and upheld the constitutionality of the Act. Before delving into the judgment, it is critical to note that Dr Kamau did not challenge the laws making it a crime to perform FGM/C against children. She only attacked the Prohibition of Female Genital Mutilation Act because of its effect on adult women.

The High Court raised six issues for determination. I will only analyse two main issues: Whether FGM/C is a harmful cultural practice, and whether the rights of women to uphold and respect their culture and identity were violated by the Act.

To determine the first issue of whether FGM/C reached the threshold of a harmful cultural practice, the Court recognised that the Act defines FGM/C to include all procedures involving partial or total removal of the female genitalia for non-medical reasons.

To define harm or harmful cultural practices, the Court examined the causes and effects of FGM/C and relied on Articles 53 and 55 of the Constitution, the Penal Code and the African Charter on Human and Peoples’ Rights on the Rights of Women in Africa, better known as the Maputo Protocol.

Article 55 of the Constitution is crucial to the case. It is about the rights of youth. It says that the youth must be protected from harmful cultural practices. The Constitution defines 'youth' as persons 35 years and below in age.

So, although adult (over 18) women between 18 and 35 years are still youth, they must still be protected against harmful cultural practices. The Penal Code also provides elaborate definitions of harm, grievous bodily harm and dangerous harm.

International treaties which Kenya ratified such as the Maputo Protocol also define harmful practices in Article 1(g) as “all behaviour, attitudes and or practices which negatively affect fundamental rights of women and girls, such as their right to life, health, dignity, education and physical integrity".

The latter was relied on heavily by the court in its analysis of whether FGM/C is harmful.

The court referred to the witness testimonies of survivors of FGM/C to demonstrate that there are varying reasons why FGM /C is performed in different communities. It may be a rite of passage to adulthood, it may focus on promotion of modesty, or on making the children or women better marriage prospects.

The court found that these reasons showed FGM/C is linked to social pressures from family and the community. And some women undergo stigma and sanctions for abandoning the practice. Women who gave evidence testified to the immediate, short term, and long-term devastating physical and psychological effects of undergoing FGM/C.

DID THE ACT VIOLATE RIGHT TO CULTURE?

On the right to practice a culture of one’s own choice, the Preamble to the Constitution, Articles 11 and 44 are instructive. Indeed, the petition raised divergent opinions among members of the public as to whether Dr Kamau’s arguments that adult women should be allowed to choose to participate in a cultural practice such as this are valid.

This issue prompted the Court to conduct a balancing of competing rights to determine whether the right to culture was infringed.

On one hand, the state and all but one of the interested parties argued that FGM/C violates the right to life, freedom from discrimination, human dignity, freedom and security of the person and the right to the highest attainable standard of health and reproductive rights.

On the other hand, Dr Kamau argued that by denying women the right to choose to practice FGM/C, women’s right to practice a culture and belief and religion was violated.

The court held that Dr Kamau failed to show the link between FGM/C and her right to manifest her religion and belief, so had not shown that her right to freedom to exercise her belief was violated.

The court also held that the right to participate in a cultural practice such as FGM/C could be limited under Article 24 of the Constitution. The limitation must be rational, reasonable and proportional in an open and democratic society based on dignity.

The court rightly found that evidence from medical experts of the state showed FGM/C negatively impacted the right to health of women and their well-being therefore the Act provided a justifiable limitation to the right to practice a culture of one’s choice.

In addition, the court held that the right to culture under Article 44(3) entails the element of consent. It provides that “a person shall not compel another person to perform, observe or undergo any cultural practice or rite."

So, because of societal pressure, deception, misinformation leading up to the performance of FGM and stigma for one who chose not to undergo it — testified to by witnesses — there was no element of consent. Therefore, there was no violation of the right to culture. Something you are forced into is not rightly described as a right.

In addition, a person cannot consent to have harm done to them.

The court also observed that section 19(6) of the Act provides that a person’s consent to undergo FGM/C cannot be used to prevent another person from being charged with a criminal offence of performing FGM/C and no person can license another person to commit such a crime. They affirmed that this provision of the law is constitutional.

In conclusion, the court recognised that culture is dynamic and changes from time to time depending on factors such as "education, religion, inter marriage, urbanisation or influence from other communities" and only those aspects of culture that are not harmful are protected under the Constitution.

Far from deciding that the law was constitutional for prohibiting FGM/C, the court went further. It directed the Attorney General to forward proposals to the National Assembly to change the Act to prohibiting all forms of harmful practices of FGM. It should include what is called type IV FGM,which is recognised as harmful by the World Health Organization but not by the Act.

Type IV covers a varied group of generally less serious - though still harmful - treatments of the woman’s clitoris. The court said this was a gap in the law which should be filled.

The author is an advocate of the High Court of Kenya.

Why county governments are critical in ending FGM

FGM has bad effects on the health and emotional status of women. It affects their self esteem.
Opinion
2 months ago

FGM has been against the law in Kenya since 2011 but the practice continues.
News
1 year ago

FGM is a breach of rights, health risk and barrier to growth