•Political observers say the President will have a lot of sway in the upcoming election, and that whoever he chooses will matter. 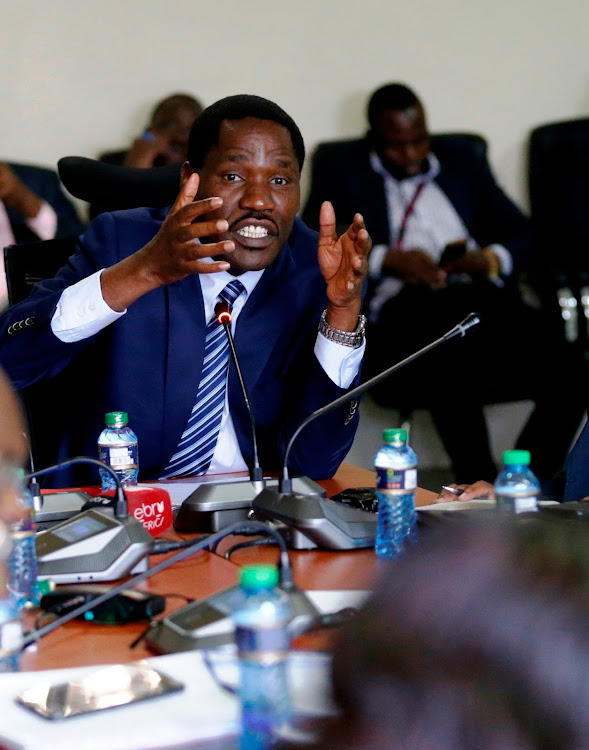 The battle for Mt Kenya has taken a new shape amid signals President Uhuru Kenyatta – the region’s kingpin - could be grooming Agriculture CSPeter Munya to take the mantle.

The former Meru Governor is said to enjoy Uhuru's goodwill and has had a busy calendar since December, mostly conducting duties delegated by the President.

Munya has been representing the President at various functions in the region, some officially and others under gentlemen’s agreement.

On February 9, he represented Uhuru at the funeral of the mother of Thika Town MP Patrick Wainaina in Kiambu, a function attended by Deputy President William Ruto.

Uhuru also named Munya chairperson and spokesman of a caucus of senior government officials to deliver BBI in the region.

The Star has established the President wants the CS to be the man to work with whichever politician the region will partner with for 2022.

The CS, former Gatanga MP Peter Kenneth and National Assembly Speaker Justin Muturi are said to have a head start in the region.

Kenneth is largely aligned to Raila’s camp with Jubilee vice-chairman David Murathe and Igembe North MP Maoka Maore,  while Muturi has been consulting leaders from the region on his bid for the country’s top seat.

Muturi has been engaging MPs from Mt Kenya East and beyond; and has been approached by Njuri Nceke, the Kiama Kia Ma, Embu and Mbeere elders, as well as religious leaders. 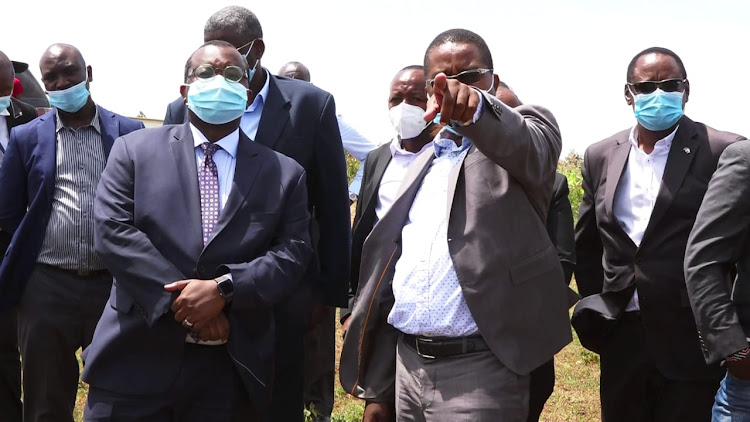 Governor Mwangi wa Iria has also shored up his preparations, the BBI campaign presenting him a golden opening to market his Usawa outfit.

Former Agriculture CS Mwangi Kiunjuri has equally raised his stakes by positioning himself as best bet for Ruto's running mate.

Kirinyaga Governor Anne Waiguru, who had been touted as one of the possible heirs, appears to be keen on defending her seat. She buried a hatched with Interior PS Karanja Kibicho, ending months of feuding.

Fortunes may, however, change for the big guns like Kenneth and co, most of whom may only land consideration for a Cabinet slot in the new plan.

Some leaders, though, feel that Munya is propping himself, adding that the President appears keen to have no one else call shots in the region, but him.

Be that as it may, Munya’s entry stands to throw into disarray, plans by the pack of bigwigs seeking to be the ones negotiating the region’s share of the national cake.

Political observers say the President will have a lot of sway in the upcoming election, and that whoever he chooses will matter.

Maara MP Kareke Mbiuki told the Star, on Munya’s activities, that there ‘were such stories but they are yet to see and feel’.

Saying that as a community they’d appreciate people being propped, the final verdict rests with wananchi.

Mbiuki said on the phone that the President will have a say when it comes to the kingship of Mt Kenya.

“He will sway the person who can take up leadership of the region,” the MP said. “Many of us are positioning ourselves strategically to be 'blessed' by him.”

“Munya, from where I sit, seems to enjoy a lot of goodwill from the President. I don’t know if at all the CS himself has made up his mind to be governor or play national politics. It is not clear. If the President endorses him, he will have a big mileage,” Mbiuki said.

Immediately after he lost in 2017 to Meru Governor Kiraitu Murungi, Munya said he will vie for the country's top seat in 2022.

Another factor is said to be on the president’s desire ‘to teach those who have given him sleepless nights a lesson at the ballot’.

The lot is allied to Ruto, who, from the recent rousing welcome at Gatanga, enjoys massive support in the region.

ANC leader Musalia Mudavadi is also making forays in the region. He held meetings with elders and addressed public meetings.

During the recent Sagana meeting, leaders agreed was to pass the BBI first, then regroup to draw a 2022 plan from the referendum outcome.

“The region will come together to seek a unity of purpose and then look at the leadership of the region beyond the Presidency of Uhuru,” Mbiuki said.

But Nyeri Woman MP Mukami Wachira dismissed those positioning themselves as no match against DP Ruto.

“We have decided to go with Ruto all the way. The peoples we hear seeking to be our kingpin are of no consequence. They cannot beat the wave. More people are joining us,” she said. 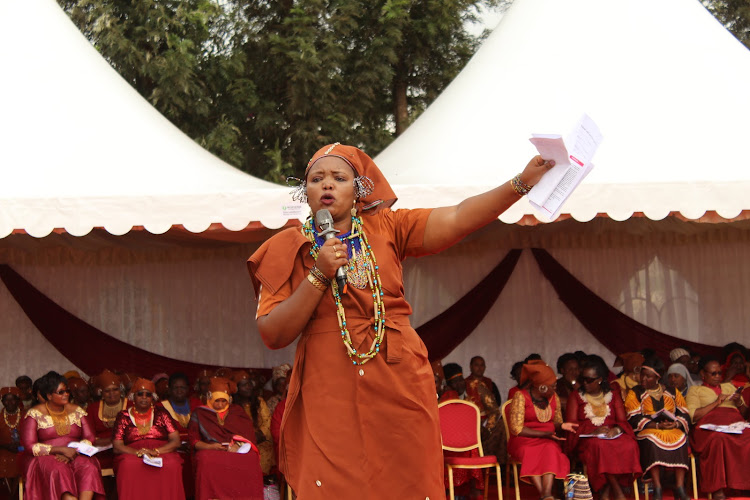 We have decided to go with Ruto all the way. The peoples we hear seeking to be our kingpin are of no consequence. They cannot beat the wave. More people are joining us

Even so, the scramble by the bigwigs eyeing to succeed Uhuru is continuing to gain momentum.

Meru, Embu, Laikipia, Kirinyaga, Nyeri and Tharaka Nithi counties – which are on the east side of Mt Kenya — say it is their turn to be at the helm.

The situation has stirred major alignments and realignments, with Kiambu and Murang’a being asked to back their brothers from the East.

Lawyer Kevin Kariuki, in an interview with the Star on the political machinations in the region, said  everyone has a democratic right to contest comes 2022.

The Mt Kenya Foundation lawyer said that they will ensure peace prevails within the region and that the outfit will support a candidate who will be endorsed by the people.

In 2013 and 2017, the Foundation played a key role in unifying Mt Kenya people to ensure the re-election of Uhuru.

“Kutaka si kupata, (wishing doesn’t mean getting), let them come out in large and their democratic rights will be respected. In 2022, we need a safe and peaceful election,” Kariuki said.

He, however, cautioned that politics of succession aren’t important as Uhuru is still in power.

GEMA cultural organization secretary-general Arthur Namu said they are concerned about getting the best candidate for Kenya.

“The tribal politics should end as it is not helpful. Kenya needs a leader with integrity and who is ready to serve. It is too early to speculate who will be the next to succeed Uhuru,” he said.

He said that clans, ethnic groups, the geographical location shouldn’t be considered while selecting a presidential candidate.

“The issue about tribe shouldn’t be a factor to determine the next presidential candidate. We need someone to lead Kenyans to promised land irrespective of his/her tribe, someone with good governance and integrity, “ he said.

Njuri Ncheke Council of Elders secretary-general Josphat Murangiri had said the 2022 presidential bid should be reserved for a person from another Gema community, not Kikuyu.

“The Kikuyu have already produced three presidents — the founding President Jomo Kenyatta, the third President Mwai Kibaki, and Uhuru,” he said adding that “they should now return the favour”.

Ben Kanyenji, secretary-general, Mbeere - Embu Council of elders said if Mt Kenya wants their person to be a running mate, they should field someone with no future presidential ambitions.

“There is no need for alarm about 2022. Let us now concentrate on service delivery to the people,” he said.

The confusion in Mt Kenya linked to succession politics and the BBI.
News
3 months ago

3 groups emerge in battle to succeed Uhuru as Mt Kenya kingpin, with a shot at higher office.
News
7 months ago

Raila has of late found himself deserted by the once-formidable Mt Kenya army.
News
2 months ago
by MOSES ODHIAMBO, LUKE AWICH and AMOS NJAU
Siasa
06 March 2021 - 06:39