• In recent years, Turkey has been a leading development partner in Africa, which is seen as a key area for economic opportunities by Ankara.

• Given Kenya and Turkey are now key players in Horn of Africa stability, analysts say Nairobi needs to leverage on Ankara’s position regionally for peace and security. 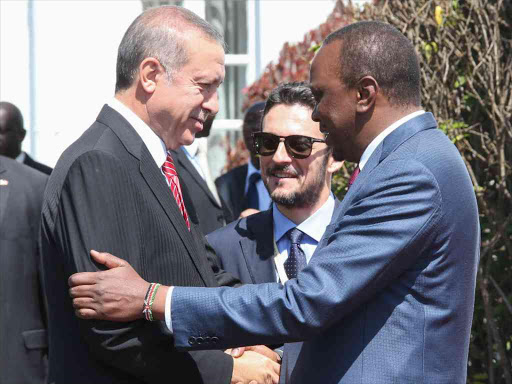 Regional analysts and experts are calling for Kenya to develop a policy on Turkey, as the transcontinental country strategically positions itself in the Horn region.

The emergent Turkey has made inroads in Africa through high-level visits, being the voice of the continent at international fora and via trade and humanitarian assistance.

Since 2011, for instance, Turkey has been a key source of aid to Somalia, using it as the entry point to the Horn of Africa. It has contributed to Somalia's post-conflict rebuilding, constructing hospitals and training the country's security forces. From 2009, Turkey has increased its embassies in Africa from 12 to 42.

And in 2016, Turkey President Recep Tayyip Erdogan visited the East African region and opened the country’s biggest embassy in Somalia. It also has the largest military base in Somalia.

This was the second-leg of a three-country tour of East Africa — Kenya, Uganda and Somalia. Erdogan was accompanied by a 150-member  business delegation, signalling an emergent Turkey seeking to invest in the region.

In recent years, Turkey has been a leading development partner in Africa, which is seen as a key area for economic opportunities by Ankara. Former President Abdullah Gul visited Kenya in 2009, while President Uhuru Kenyatta paid a visit to Turkey in 2014.

This closeness and turning to Africa is seen partly as a reaction to the rejection of its bid to join the European Union citing human rights violations.

In 2019, the European Parliament called for the suspension of EU accession talks with Turkey, citing violations of human rights and the rule of law. Turkey rejected the vote as meaningless.

Human Rights Watch World Report 2021 said the assault on human rights and the rule of law continued during the Covid-19 pandemic. It also noted that Erdoğan government continued to arrest and detain individuals it regards as critics or political opponents, especially after the July 2016 coup attempt.

“A rise in allegations of torture, ill-treatment, and cruel and inhuman or degrading treatment in police and military custody and prison over the past four years has set back Turkey’s earlier progress in this area,” Human Rights Watch said in the report.

The Financial Times said in a January 2021 report said Ankara’s focus on big state infrastructure deals and contracts across Africa — from an Olympic-size pool in Senegal to its biggest overseas military facility in Somalia and a large mosque in Djibouti — underlines the economic and geopolitical importance it attaches to the continent.

And given Kenya and Turkey are now key players in the Horn's  stability, Prof Peter Kagwanja of the Africa Policy institute said Nairobi needs to leverage on Ankara’s position regionally for peace and security.

Turkey’s presence is very visible. It came to Somalia through humanitarian grounds with the tagline ‘Turkish Airlines Help Somalia’. Now, Turkish Airlines is the only airline to Mogadishu. They are visible on ground and air

“Turkey is one of the most influential countries in the Horn of Africa today with a show of its military force without necessarily using it," Kagwanja said.

It also has the largest military base in Somalia; it offers a lot of scholarships to students in Somalia.

“It is a medical destination for Somalis seeking healthcare and also has a lot of cultural influence in the country. And because of that, it has the capacity to change and shape events within Somalia without appearing to be intervening in it political affairs,” Kagwanja said during a roundtable meeting organised by the Horn Centre for Security Analysis.

He said Kenya needs to be more strategic and recognise that it is a regional power, though “Kenya has disappeared in the region."

“Where is the geostrategic policy? We were powerful because we hid behind Ethiopia, who are more militaristic. We now have no ally in Ethiopia following the collapse of the Solomonic dynasty,” Kagwanja said.

The Solomonic dynasty, also known as the House of Solomon, was a dynasty of the Ethiopian Empire formed in the 13th century. Its first ruler was Haile Selassie I.

Kagwanja said Kenya needs a response that should have a national perspective.

“To construct new engagements, we need to craft wide frameworks, project regional power and anchor it in sustainable partnerships with Turkey,” Kagwanja said.

Independent consultant Wangechi Chege said such a policy should consider security sector reforms and capacity building, which Turkey has maximised on.

She noted that as other countries look elsewhere, Kenya should strategically place itself to get into Somalia.

Wangechi said Kenya's proximity to Somalia is an added advantage and it should make use of diplomacy and negotiations to engage Mogadishu. Somalia severed ties with Kenya on November 30.

“Turkey’s presence is very visible. It came to Somalia through humanitarian grounds with the tagline ‘Turkish Airlines Help Somalia’. Now, Turkish Airlines is the only airline to Mogadishu. They are visible on ground and air,” Wangechi said.

Wangechi, who teaches at USIU-Africa, noted that already, Turkey is training 10,000 soldiers. She said training of Somalia commandos would be an opportunity Kenya can take advantage of.

Why is Turkey succeeding where Kenya isn't?

Wangechi says Turkey’s use of soft strategy and informal dialogues to address security issues plays to its advantage.

“There is no interference with Somalia’s politics of the day. And Turkey is winning the hearts of the locals by showing they don’t have direct influence on who is the leader. Whoever comes in Turkey will work with. That is how then they are getting the buy-in from the locals. It is giving military and political support but that doesn’t mean it is interfering,” Wangechi noted.

Dr Ahmed Hashi, Horn of Africa analyst, said with the current election stalemate, Somalia is almost getting to a meltdown, and risks going back to civil war.

He noted that elections will be key to Somalia’s stability and thus important for regional organisations such as IGAD to ensure elections are conducted.

While Turkey has expressed concerns over the election stalemate, Kenya remains mum despite the immediate consequences it would suffer in case of an instable Somalia.

Dr Mumo Nzau said the Gulf States are important to Somalia and Kenya because they can influence how cooperation or conflicts take place as well as competition in the region.

Trade, humanitarian and development/ infrastructure partnerships have been the key elements of Turkey’s cooperation with Kenya.

For instance, Turkish Coordination and Cooperation Agency — TİKA Nairobi Office — has been operating in Kenya since 2012.

As of 2018, the Turkish embassy says, it had implemented 200 projects in Kenya particularly in the fields of health, food, agriculture, livestock and education.

As is happening with Somalia, between 2017 to 2019, 60 Kenyan students were funded by the Türkiye Scholarships Programme to study in Turkish universities.

Dr Patrick Maluki of the University of Nairobi said one of the ways Kenya can take advantage of Turkey’s political expansion in terms of influence is to be the launching path in Africa.

That will depend on how efficient and effective Kenya is by having policies that are attractive to Turkey and other development partners she may come alongside with.

Michael Macharia of Pioneer University suggested that in developing such a policy, Kenya needs to identify key areas of mutual interests and “get a template to guide the interests.

“There is need to provide incentives to the private sector because they help build relations to encourage foreign direct investments,” Macharia said.

Among the ways to enhance such ties is to encourage free movement of persons, reduction of tariffs, partnership in security and the war on terrorism and trade facilitation.

The schism which started in the Gulf has spread like a virus.
Business
2 years ago
by ELIUD KIBII Subeditor and writer
Siasa
05 March 2021 - 05:00