Patience not only keeps you focused on the bigger prize, but helps build consensus when the time comes

• If we have a problem with any leader, we must keep his community out of it.

• The second lesson must be something President Kenyatta alluded to at the function: The need for patience in political ambitions. The third is the importance of .. 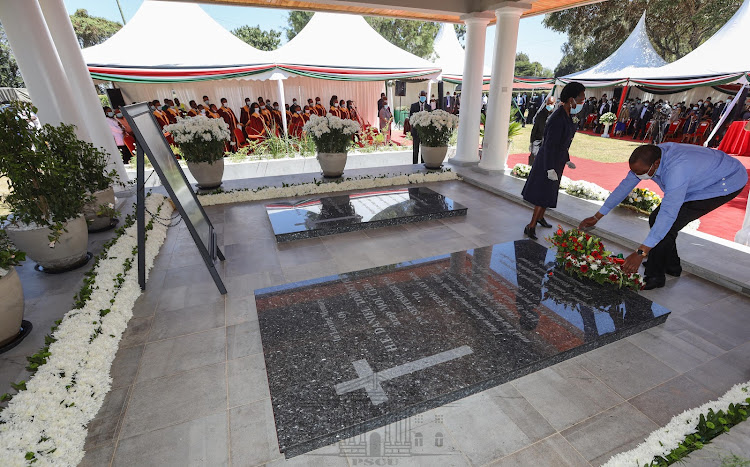 Top political leaders trooped to the old man’s Kabarak political shrine for some moment of serene remembrance. You have to marvel at these aristocratic functions. There are generally no people chanting loyalty to wheelbarrows, or fury fuelled pseudo-alpha males attempting to storm the podium, without muscles to back the fury.

Beyond the exotic meals, probably washed down with choice wines, I hope the leaders on show found time to reflect on some of the more memorable sides of the late President.

The first has to do with next year’s transition.

The 2022 elections will mark exactly 20 years since President Moi handed over power to Mwai Kibaki in 2002. The jury is still out on which of the two transitions can be seen as the more delicate.

But there was a comical side to the 2002 one, when handlers of the newly elected Kibaki wanted the coronation done within hours of the declaration of victory. They came from the school of thought that Moi would never hand over power peacefully, and every hour that passed represented in their view a real chance that their victory would melt away.

I remember being at Uhuru Park for the swearing-in, and as we waited, we kept looking towards Processional Way, half-expecting that the military would swoop in and send us all back to our pre-victory world of hope.

It later turned out that as an institution, the military’s firm, forthright and apolitical stand played no small role in the smooth transition. In fact, the calm and professional Army Commander Lt Gen Lazarus Sumbeiywo, who in the eyes of the incoming Narc people was the face of the 'Moi security infrastructure', was what the doctor had ordered for a peaceful transfer.

In a way, what the incoming administration saw as the possible avenues for Moi’s refusal to cede control, turned out to be the exact catalysts for unity at a delicate moment.

By contrast, the Narc brigade, boasting a fine cast of Second Liberation warriors, couldn’t conduct a credible election and transition just five years later. Under the man they had vilified for years, the country had its last credible election, and last election in which a defeated candidate openly conceded.

Indeed, the incoming administration in 2003 seemed to imagine that their biggest problem was Moi’s entire ethnic community, thereby creating the conditions for a vengeful and divisive period that culminated in the violence after the 2007 election.

The lesson is that even now,  if we have a problem with any leader, we must keep his community out of it.

For the leaders who converged at Kabarak last week to pay homage to the departed President, we must truly pray that they had lessons to learn from that transition, and will work to conduct one that leaves behind a united country the way Moi did.

There are simply no two ways about it. The second lesson must be something President Uhuru Kenyatta alluded to at the function: The need for patience in political ambitions.

The history of Moi as Vice President has public anecdotes of humiliation by people, including lowly civil servants who never saw a path to the presidency. It is easy to dismiss his humility in the face of these humiliations as cowardice, but anyone who has studied Kenyan politics knows that aggression causes anxiety among the stakeholders of power. Moi's template shines on as the most strategic path to power.

Besides, if you constantly try to outshine your boss, and cause mistrust by your ambitions, there must be more silent forces, including the shadowy 'deep state', if it exists, that you antagonise by the perceived aggression.

Hopefully, those who seek high office in the coming election will remember that like Moi, patience not only keeps you focused on the bigger prize, but also helps build consensus when the time comes.

The third point of reflection for Kabarak guests, in my view, is also the one I consider the greatest. I have posited on these pages before that education, if you ask me, remains Moi’s greatest legacy.

I submit that under Moi, more schools were built, more colleges and universities launched and more children entered school, than at any time before his presidency. He especially gave a shot in the arm to girl child education with all the girls’ schools that sprang up all over the country.

The Nyayo School Milk programme, a simple philosophy, yet as a nutritional concept to spur attendance, and the wonder of its infrastructural delivery, stands out as one of the marvels of our education system. But Moi did not just build schools as mere classrooms. He strove to create environments where the complete child was moulded.

The private schools he owned (Kabarak, Sacho, Moi Educational Centre and Sunshine) are testimony to what you achieve when a strong religious foundation and humility espoused by the owner, are instilled in the learner.

The Moi schools are uniquely run in such a way that the children of the rich and famous study there too, yet they retain the distinctly humble nature of the Moi brand.

Covid-19 has exposed our soft school's underbelly across the country, reminding us that after 2002, we haven’t built enough classrooms for the growing number of children, and that we went to sleep on Moi’s schools legacy. If we want the education revolution, we have a foundation to base it on from that era.

Obviously, this Moi fete will happen every year. Hopefully it doesn’t turn into one more extravaganza of annual speeches. The more important way to remember Moi will be for our leaders to ask themselves if they have lived up to the ideals of the man they all claim was their mentor and political teacher. Have we built on the national unity and peace that he bestowed on us?

What have we done to promote the education that he so cherished? Is the rhetoric ahead of the 2022 elections helping build confidence in our electoral systems and impending transition? Do we have leaders today who will go to Uhuru Park and oversee a peaceful handover of power, even when mud is thrown at them, whether they like the eventual winner of the election or not?

Can we trust the current crop of leaders to tone down their ambition and be patient with the pursuit of power, so that we don’t sacrifice national security, stability and peace, for rabid designs on power?

If our leaders really want to honour Moi, these are the answers they must provide before the second anniversary, this time next year.

Moi made you who you are, Kalonzo tells DP Ruto

Says DP Ruto was more of a son to Moi than Gideon. Been part of the system.
News
2 months ago

Tangatanga is demolition squad not worth voting for — Uhuru

President says some politicians seeking positions are only hell-bent on destroying the country.
News
2 months ago
by COLLINS AJUOK
Siasa
14 February 2021 - 08:18