• President Zewde said she was honoured to visit as Ethiopian Head of State and committed to working to strengthen relations between Burundi and Ethiopia. 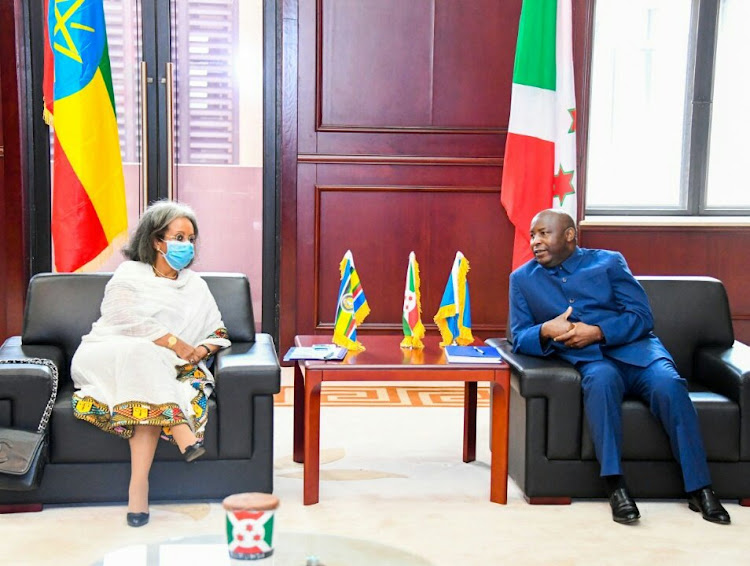 Burundi continues to open to the world, this week hosting a delegation from Morocco and Ethiopia President Sahle-Work Zewde for a two-day visit.

Both visits were on the invitation of President Évariste Ndayishimiye.

The high-level delegation from Morocco led by Director General of the Moroccan Agency for International Cooperation Mohamed Methqal stayed in Bujumbura on February 8 and 9. The team was in the capital for political consultations.

President Zewde, who also led a delegation, arrived on Wednesday.

Foreign Affairs minister Albert Shingiro welcomed the Moroccan delegation, saying the visit was “eloquent proof and a shared will of the governments of Burundi and Morocco to strengthen the excellent relations of friendship and cooperation”.

Ambassador Methqal said they are seeking to strengthen cooperation with Burundi in the fields of education, tourism, health, agriculture, renewable energies, and to develop economic partnership through investments.

He also announced that Morocco will open an embassy in Bujumbura to serve as a direct diplomatic bridge between the two states. Burundi opened a resident embassy in Rabat in 2015.

The Ambassador,DirectorGeneral of the Moroccan Agency for Inter'l Cooperation Mr. Mohamed METHQAL announced the decision of the Kingdom of Morocco to open,as a reciprocity,an Embassy with residence in Bujumbura that will serve as a direct diplomatic bridge between our 2countries. pic.twitter.com/IzLn4O7whP

Making the first of such visit by either President or Prime Minister to Burundi, Zewde said she was honoured to visit as Ethiopian Head of State and committed to working to strengthen relations between Burundi and Ethiopia.

“Our two countries have enjoyed long-lasting relationship. We now want to strengthen that and bring it to a higher level and for that, it is really important to come and discuss and identify areas where we can cooperate,” Zewde said at a press conference.

Upon the invitation of the President of the Republic of #Burundi, H.E. President Évariste Ndayishimiye, H.E. President @SahleWorkZewde of #Ethiopia has arrived in #Bujumbura, for a two-day working visit. pic.twitter.com/vmQ5aDqtWT

At the same time, political dialogue between Burundi and the European Union continued on Wednesday with technical exchanges between the two parties.

The East African country on February 2 resumed engagement with the European Union.

On December 7, the UN Security Council ended mandatory reporting on Burundi and encouraged international partners to continue dialogue towards resumption of development assistance. UNSC cited peaceful elections in May, which it said marked a new phase for the country.

Earlier in November, the Permanent Council of La Francophonie lifted the 2015 sanctions against the East African country during its 112th session.

This meant the International Organisation of la Francophonie would resume cooperation. The sanctions were effected in the wake of a political crisis.

When Ndayishimiye met with members of the diplomatic and consular corps accredited to Burundi, he said regarding relations with other countries and international organisations, that time had come for a dynamic of complementarity and mutual understanding based on dialogue.

“We are delighted to see that things are developing for the better. With regard to development itself, we would like to make use of this platform to express our gratitude to the countries and organisations which have already shown their willingness to support Burundi on its many sites,” he said.

Burundi presidency said the two explored opportunities for cooperation and rapprochement between the two states.