Hustlers vs dynasties rhetoric getting out of hand

• In the past, elections have caused death and destruction.

• As we approach the 2022 elections, the hustler vs dynasty rhetoric is showing all signs of ending up in a disaster. Already dangerous trickle-down violence. 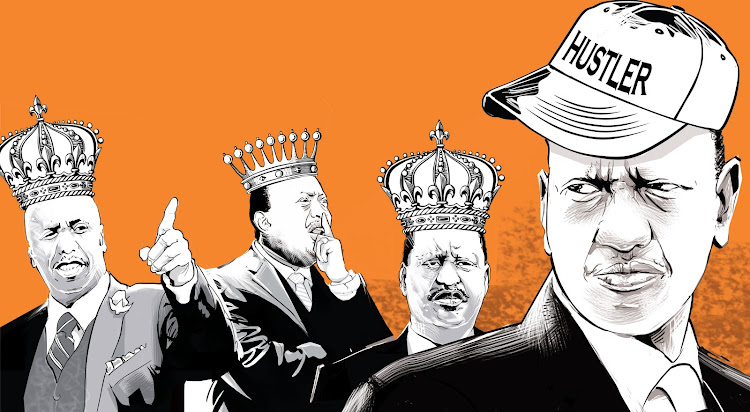 HUSTLERS ALL: Hustler nation narrative is divisive.
Image: THE STAR

Last week, social media reports went viral with news that owners of vehicles in Buruburu estate, Nairobi, woke up to a rude shock when vehicles parked outside had the inscription 'Dynasty' written on them.

A few days before, boda boda riders in Western Kenya burnt down a vehicle that was involved in an accident with one of them, while shouting “dynasty”.

Two weeks earlier, a video of a man from Central Kenya complaining that persons are being mugged while being called 'dynasty' went viral. In a school in Ganjoni, Mombasa, it was reported that a 10-year-old beat up his classmate who had called him a poor hustler.

It would seem that all over the country, the hustler vs dynasty rhetoric is gaining ground and unfortunately taking on negative connotations linked with crime and other social ills. It is now not safe to own property particularly in mid-level or poor communities.

Once an individual does so, then they are classified as dynasty and taken advantage of. The incident in Buruburu is one that should make everyone  worry. Many of those who own vehicles in that community had to struggle and hustle for years.

A good number of them are still servicing loans they took to buy the vehicles. For fellow community members then to turn around and point fingers at them and call them 'Dynasty'is incorrect and misguided.

So deeply entrenched is the rhetoric becoming that it has now even gotten into our children. The incident in Ganjoni is testimony to this.

HAKI Africa followed up on the matter for research purposes and learnt that the boy felt being called a hustler was devaluing him and his family. He also felt that he ascribes more to the dynasty rhetoric and for those reasons, engaged in an argument that ended up in the fight.

It would seem wherever the hustler vs dynasty argument has surfaced, it has ended up causing conflict, damage and harm.

In reference to the boda boda incident, the police last week issued a stern warning to the boda boda sector and cautioned them against taking the law into their own  hands. Police were clear that malicious damage to property and assault by the sector were rampant and warned individuals involved that the law will catch up with them.

Riders opting to attack vehicles and drivers in the name of hustlers vs dynasties is evidence of the dangerous trend spreading across the country. If  left unchecked, the actions may easily lead to a worsening security situation in the country.

The rhetoric is clearly becoming a political contestation that has nothing to do with the common mwananchi. It has become a strategy to divide the people and drive a wedge between communities at a time when political temperatures are rising. It is splitting Kenyans more than uniting them.

Even among people of the same class, the rhetoric is now being used to discriminate against real hard working Kenyans who have struggled to improve their living standards and the livelihoods of their families. The rhetoric is further being used by criminals to steal from and harm others as well as steal and damage property.

As a country, we must evaluate the situation and engage each other on what is best for the our people. In the past, elections have caused death and destruction in the country. As we approach the 2022 elections, the hustlers vs dynasties rhetoric is showing all signs of ending up as a disaster.

When an idea or slogan is even used by criminals to justify their commission of crime, it must be rethought. In the build-up to the elections, we must find ways of uniting wananchi and enhancing cohesion. People from different economic classes they should not view each other as enemies but find a way of helping each other to lead better lives.

It is only by viewing each other as fellow Kenyans will the country enjoy peace and prosperity.

Narrative of hustlers vs dynasties is a cynical propaganda

Dictionary definition of hustler is one who aggressively does activities for survival.
Opinion
1 year ago

Demystifying Ruto's 'us hustlers' vs 'them dynasties'

The hustler-dynasty battle being waged is not just fake, but delusional
Siasa
5 months ago

Dynasties vs hustlers is a lie