• Let us be thankful we at least have a President and an opposition leader who have made a little progress in governance and development, and let us build on that.

• Let us be thankful that despite rampant corruption over the decades that has only gotten worse, the country remains alive, though barely. 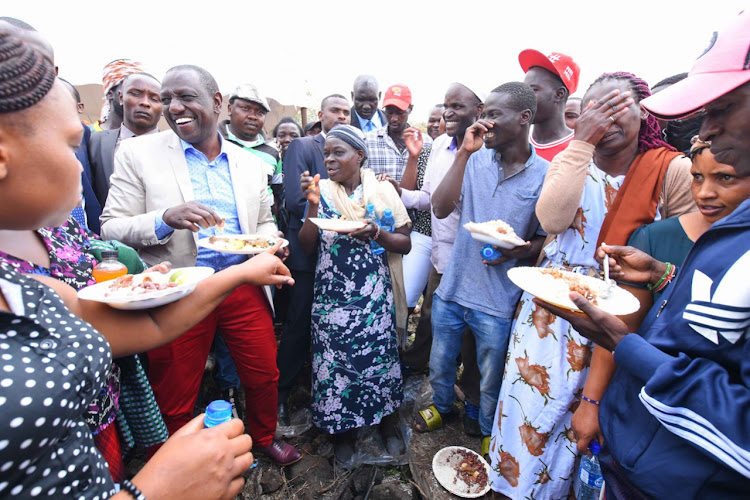 GIVING THANKS: Deputy President William Ruto at a thanksgiving event at Bomas of Kenya on Friday, November 22, 2019.
Image: LYNDSAY NYAWIRA

Christmas holiday in the US, Canada, St Lucia, and Liberia is preceded by Thanksgiving.

This is a national holiday that has evolved from a day of giving thanks for the Pilgrims' first harvest in the New World in 1621 to one in which everyone is encouraged to pause and be thankful for everything they deem worth appreciating.

This is particularly true among believers who use the holiday to thank God for blessings and to ask Him to heal the wounds of the nation. Non-believers also take advantage of the holiday to gather and celebrate as family.

On March 9, 2018, President Uhuru Kenyatta shook hands with ODM leader Raila Odinga based on their belief the handshake would heal the wounds of the nation.

Had we also adopted Thanksgiving as a holiday, the handshake would have been at the top of the list of events to be thankful for.

There have been developments since then, key among them the birth of the BBI report.

As this year comes to an end, perhaps it is good time to write down or think about things we are or should be thankful for as a country.

There are only two occasions when we are forced to think and act collectively as a nation, and that is during national elections and during occasional referendums.

To be more accurate, these are the two occasions when we are supposed to collectively think and act as Kenyans.

However, in practice, these are the two occasions we are herded together like cattle and told by our tribal chiefs who to vote for or how to vote in a referendum.

Few Kenyans ever vote or support anything out of their own free will or based on values aligned with their own.

Were Kenyans to vote or take positions on any referendum based on possession of accurate information — not what they are fed — and vote based on what they believe to be good or bad, we could then say we have had an outcome that truly represents the views of the majority.

This has never happened, except in 2002 when Kenyans rejected then little-known Uhuru Kenyatta and in 2010 when we promulgated the new Constitution.

In the other instances, nearly everyone was led to the river and told to drink dirty water, or it was forced down their throats.

The outcome has been the divided country we had until the handshake happened. And if things are not fixed quickly, we will see the re-emergence of the deep divisions again as BBI comes to its conclusion.

The wiser path will be to collectively take stock of what we have and appreciate the progress we have made. Again, at the top of that list is BBI and the point is, despite any flaws some may think the report has, it is better than having nothing.

Let us be thankful we at least have a president and an opposition leader who have made a little progress in governance and development and let us build on that, rather than baying at or trying to destroy it.

Let us be thankful that despite rampant corruption over the decades that has only gotten worse, the country remains alive, though barely.

Let us be thankful for a Senate that is doing its part in removing from office those who bring shame to their counties and even the country for their bad conduct, ineptness or both.

Let us be thankful for a country that, despite our failings, many continue to look up to among those countries in Africa that stand out for the good we have, including our hospitality and welcoming nature.

Samuel Omwenga is a legal analyst and political analyst