The CRADLE, a children's foundation, is one of her dreams come true

• Millie first thought about becoming an MP at the age of 13.

• The graduate of University of Nairobi School of Law has worked as a lawyer and women and children rights' activist. 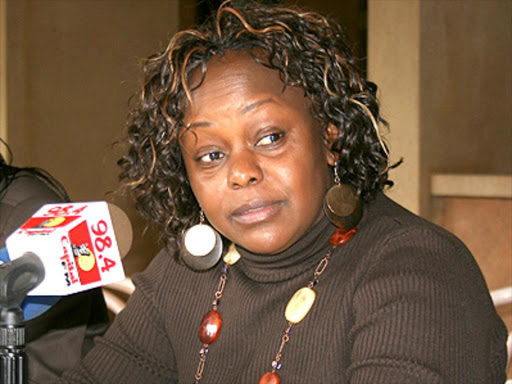 Suba North MP Millie Odhiambo can be a combatant legislator.  That's perhaps what she is well-known for. But she is also a compassionate woman.

At the launch of the BBI report on October 26, Millie, aka Amilo Geza Geza Mrembo wa Suba, was caught on camera shouting down Deputy President William Ruto when he poked holes into the document.

Asked by KTN News why she behaved that way, Millie said she was only “answering his [the DP's] questions because he was asking us questions about what should be done.”

It is, however, not the first instance in which she was caught heckling.

In a stormy parliamentary session on December 20, 2016, Odhiambo referred to President Uhuru Kenyatta as “fisi, mwizi and mshenzi (a hyena, a thief and a fool”.

“I Millie Odhiambo has said we don’t care about him and we don’t respect him. This is not a police state… he will not intimidate us. He should start packing and head to Gatundu (Uhuru’s family home),” she said.

The chaos in Parliament was triggered by a proposal by the Jubilee side to amend election laws ahead of the 2017 General Election.

Uhuru did not let the remarks slide. He waited for his moment.

“To the left is the National Assembly representing our democracy and ability of some idiots there to continue insulting me but that’s their freedom,” Uhuru said when he presided over the lighting of the KICC to usher in the Christmas season.

In 2017, Millie said she had no regrets for insulting the President.

On Tuesday, Uhuru and Millie cosied up, hugging and holding each other after a BBI press conference in Naivasha.

In August 2019, she was caught in a spat on social media with Nairobi Governor Mike Sonko. The row was triggered by comments Sonko made on the matrimonial life of the late Kibra MP Ken Okoth.

It is from the spat that many learnt of the fact she had no children of her own. She, however, says she has never felt any less of a woman because of the condition.

“God made me in a very wonderful way. I feel complete with or without a child,” Millie said in an interview last year.

A video of her teaching a crowd a song on how to say NO to sexual abuse made the rounds this year. That’s her compassionate side.

Millie first thought about becoming Mbita MP at age 13, according to Mzalendo website. The graduate of the University of Nairobi School of Law has worked as a lawyer and women and children rights' activist.

The CRADLE, a children's foundation, is one of her dreams come true.

Her political career started when she served as a delegate at the Bomas of Kenya, during the constitutional drafting process.

She was nominated by ODM to Parliament in 2008, a platform she used to clinch the Mbita MP seat in the 2013 election.

Millie has received the YWCA Democracy Award and the Eve woman of the year for human rights and gender.

She has also sponsored the Assisted Reproduction Technology Bill to help childless women.

Below, her education and career history.

2007 Member, Kenya Task Force on the Implementation of the Sexual Offences Act

1999-2000 Coalition on Violence Against Women-Kenya

Sonko accused Odhiambo of having a 'weird marital life'.
News
2 years ago

Millie opens up on her infertility in emotional interview

"God made me in a very wonderful way. I feel complete with or without a child."
News
2 years ago
by ELIUD KIBII Subeditor and writer
Siasa
06 November 2020 - 22:00