Why 'In the last 24 hours' Covid-19 statistics a fraud

•These were followed rapidly by issuance of travel restrictions, a countrywide curfew, closure of schools, ban on gatherings, including funerals and political meetings, and targeted lockdowns. The enforcement by the police was brutal.

•But it’s the collateral damage that “In the Last 24 hours” measures wrought on the economy that wasn’t foretold. Business simply went into a spin of closure, redundancy, job losses and homelessness followed. 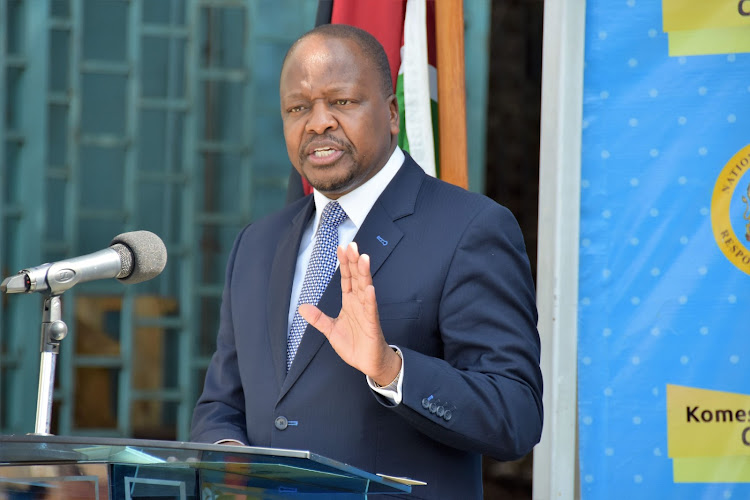 Since coronavirus struck us in March, the Ministry of Health has embarked on a daily briefing decoded as “In the last 24 hours”.

At the beginning, the bulletin revealed the virus was in Kenya, what the prognosis was and the government containment measures against its spread. That’s how the stay home, avoid physical contact (keep social distance), wear masks, wash hands and sanitise containment idioms came into vogue.

These were followed rapidly by issuance of travel restrictions, a countrywide curfew, closure of schools, ban on gatherings, including funerals and political meetings, and targeted lockdowns. The enforcement by the police was brutal.

But it’s the collateral damage that “In the Last 24 hours” measures wrought on the economy that wasn’t foretold. Business simply went into a spin of closure, redundancy, job losses and homelessness followed.

The containment measures simply meant workers couldn’t go to work, while customers vanished. Interestingly, a new cottage industry sprung up to meet demands for masks, soap and sanitiser but not enough to fill the gap created by Covid-19 ravages on production, consumption and employment.

Meantime, the daily “In the Last 24 hours” gathered steam as a must-see media show. The thrill was in the exhortations to abide by the containment measures, and the stream of numbers of the tested, infected and the dead. In-between would be added comic relief in new measures, for instance, the one-sausage-four-beers counterfoil to beat alcohol consumption edict.

But the ecstasy soon waned off “In the Last 24 hours” show as the public lapsed into the old normal as if in competition against government decrees. The more government bent backwards to meet the Kenyans expectations to relax control measures, the more they reverted to the old normal. Public apathy isn’t without justification. The numbers of the tested, infected and the dead had lost its initial magnetism.

They have been falling rather dramatically without concise explanation hence reduced public interest. Where one would expect proportionate rise in infections given the acknowledgement of community transmission and spread, there has been deafening silence on the causality factor. Why while community infection continues unabated, infections have reduced dramatically?  What’s the correlation that government isn’t telling the public?

I think “In the Last 24 hours” is a scandal of huge proportions in government dereliction of duty and abrogation of the constitutional right to know. This is much more than the Kemsa money raid because it directly compromises the lives of Kenyans and denies them the right to know the severity and spread of the virus.

First, we know — and government admits — that it hasn’t been able to follow through the promised “mass” testing that there never was. The effect of mass testing would’ve provided proximate severity status and area specifics because of the large samples involved. Instead, the country has been treated to a drip based on minute samples, whose source was initially not even attributed.

When source attribution begun, samples were concentrated in major urban centres. With counties left to their own devices, the samples weren’t nationally representative. The excuse was that the virus spread was more lethal in crowded poor urban neighbourhoods than in rural areas. Therefore, samples were high because of easy access, so were infections, but from limited geography.

Despite this limitation, there is the odd assertion of the virus being “discovered” chronologically in one county after another, even as the samples have dwindled from a high of 6,000 to an average 2,000. Why?

Second, the scandal is that government is forging reduced numbers to mean a decrease in the rate of infections thus “flattening the curve”. The fake is in the contradiction of accepting that the country has limited surveillance, tracking, contact tracing and testing capacity but creating the impression that infections are coming down.

Third, when it became obvious that community infection would be devastating after lifting lockdowns, counties were recruited to carryout tracking and contact tracing without testing capacity. With few and far between testing centres in the country, this exercise was in vain and exposed the country’s universal health care vanity didn't commensurate with poor investment in the health sector.

It gave rise to questions about the validity of the daily 24-hour circle statistics of test results. This was the first sign that “In the Last 24 hours” lay a scandal of inaccuracy because testing could’ve been done within 24-hours, but by no means were all the results obtained within that time.

Fourth, depleted of resources, counties barely carried out meaningful surveillance, enforcement of containment measures and providing PPE. They soon gave up on the pretence, including the untruthful fashion of setting up quarantine and isolation centres. Government quickly filled the void with another experiment in self-isolation and now home-based care. Both are largely impractical facades for poor Kenyans who’re on their own and have reverted to old routines as if Covid-19 doesn’t exist.

This damning allegation is buttressed by another even more shocking insight. In a story in the Star on Monday (unfortunately tacked in inside pages) that exposes “In the Last 24 hours” as a disgrace, the Kenya Medical Practitioners, Pharmacists and Dentists Union reveals in State lying about Covid-19 curve flattening, doctors’ union alleges, that we’re being taken for a nightmare ride.

The union secretary general Dr Gor Goody lifts the veil on “In the Last 24 hours” outrage stating that people suffering from non-communicable diseases such as hypertension, diabetes, cancer and the aged are getting Covid-19 and dying without being tested.

She’s quoted saying, “mortuaries are abnormally full, which means the mortality rate has increased. But we are not getting the right statistics. The government is only claiming the curve is flattening. How is it flattening?” With that, one wonders how “In the Last 24 hours” will explain a surge in infections soon.

Meanwhile, Dr Goody attributes lack of statistics to shortage of capacity to do more tests and “that is why the number of infections given daily by the government is reducing”.

She confirms that “In the Last 24 hours” is a fallacy because “those tested take up to one to four weeks to get their results” and adds the numbing suspicion that “the number of infections should be going up especially when government lifted movement restrictions leading to high urban-rural migration.” True of false?

I cannot begrudge the insight of a medical practitioner of Dr Goody’s ranking, neither could I second guess a social media post that reckons, “The curve has been flattened to pave way for referendum on constitution changes to allow a broad government which will be a burden to a tax payer” when political activity has resumed with a vengeance.

Just like Covid-19 gave birth to Kemsa theft, it has conceived “In the Last 24 hours” fraud.