ODM leasder's camaraderie with Uhuru and his Mt Kenya turf has given hope to his backers.

• Opposition chief Raila Odinga's political think tank is now bullish that 2022 will be the moment for his elusive ascension to the Presidency.

• Raila is enjoying trappings of power - even without any formal position in the Executive - with influential figures from Mt Kenya warming up to him. 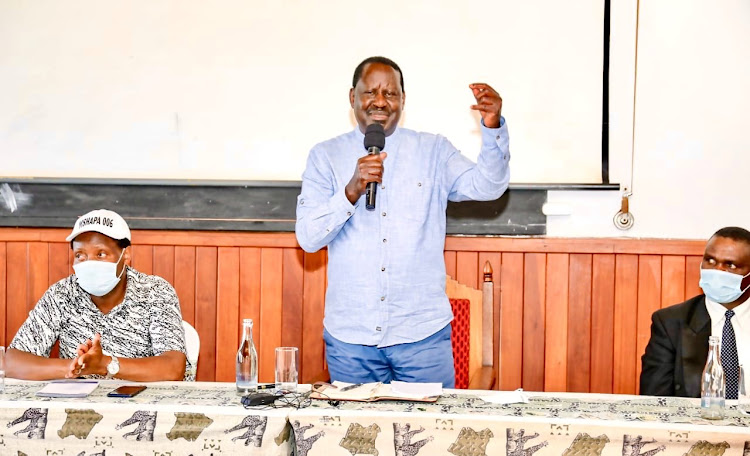 Opposition chief Raila Odinga's political think tank is now bullish that 2022 will be the moment for his elusive ascension to the presidency.

Raila's growing influence within Mt Kenya region appears to be giving hope to his key strategists that a fifth stab at the presidency carries his most prime chance to take over the reigns of power.

Raila is enjoys the trappings of power - even without any formal position in the Executive- with influential figures from Mt Kenya warming up to him.

Analysts say he would leverage on his camaraderie with President Kenyatta to make significant inroads into the vote-rich region to enhance his 2022 chances.

On Thursday, a university don who works as part of Raila's think tank told the Star in confidence that the ODM leader would roll out his 2022 campaigns soon.

“Never before has Raila had the most realistic chance than it appears in 2022. You can take it to the bank that Raila will be in the ballot,” said.

The strategist affirmed that Raila has “what every political player would yearn for” in a presidential quest.

“Raila will take the shot because 2022 offers the best fortunes ever,” he said.

Raila is said to have kicked off countrywide meetings to rally his support bases to support the impending Building Bridges Initiative in a bid to fire up his political plans.

He has not declared his interest in the presidency, but assertions by his close allies and his latest moves show his determination to throw his hut into the ring.

Raila recently affirmed that he would reveal his future political plans after the BBI report is out.

To consolidate his turfs, he has held meetings with leaders from Kakemega and Taita Taveta counties with observers saying he could be preparing ground for his presidential ambition.

He has lined up more meetings in Western, Nyanza and Rift Valley in the coming weeks to engage grassroots leaders.

ODM leader Raila Odinga will be on the ballot in 2022, Alego Usonga MP Samuel Atandi has said. Atandi was reacting to remarks by DP William Ruto ...
News
3 years ago

While close allies have been cagey on Raila's plans, one thing is clear: He will not endorse any presidential candidate.

“To ask him to endorse someone else again is to ask too much. As the holder of the vision for a new Kenya, the country will do well to give him an opportunity to implement this vision,” said ODM secretary general Edwin Sifuna.

Party national treasurer Timothy Bosire said Kenyans were yet to see the last of Raila in presidential politics.

“It is not over yet. The flower of his legacy is being remodelled. I see him as a balancing act between the anarchists and those operating on the status quo. His last contribution is ahead of us. It is yet to come. In him we expect major contributions going forward,” the ex-Kitutu Masaba MP said.

Political analysts agree there's s no way Raila would be so keen on the BBI, a revamping ODM and seeking fresh allies if he had no interest in the presidency.

Odinga is busy rebranding ODM, overhauling its office and operations and rallying support from bases such as Central where he has not been getting massive backing.

Political analyst Felix Odhiambo said Kenyans should better be used to the fact that Raila will be in the ballot in 2022.

"It is clear and Raila has sent the signals that he is preparing to run. His candidature has the blessings of influential people within the corridors of power and there is no way he will snub that," he told the Star.

According to Odhiambo, Raila's final moment will be in 2022. “If he loses in 2022, Baba would have done his part. But if he wins, he is likely to be a transitional president,” he said.

In my view, Raila is still fit for the presidential race. He has a lot of energy…something which we have been missing is the so-called system…we are with Uhuru Kenyatta who is holding the system.

The Star has established that most of Raila's political allies are urging him behind the scenes to go for the country's top seat in 2022 as he is guaranteed victory.

They believe that with the handshake and his larger-than-life stature, Raila now has the support of the key institutions and people who allegedly influence presidential outcomes.

His elder brother Oburu Oginga let the cat out of the bag when he claimed that Raila will be President in 2022 because he now has what he termed as 'the system' on his side.

“In my view, Raila is still fit for the presidential race. He has a lot of energy…something which we have been missing is the so-called system…we are with Uhuru Kenyatta who is holding the system. So, if we have the system plus our votes, which are usually more than the others, what else do we need?” Oburu said.

But Ruto has dared the “system” to bring it on, saying he has “God” and a majority of Kenyans to back what he said was an unstoppable 2022 presidential campaign.

“I just want to tell them: We’re waiting for you. This system, this deep state we are being told about, we are waiting for it,” the DP said last month.

“They’ll come with the system, but we will be there with the people and God and see who wins.”

A faction of the President's ruling Jubilee party is pushing for a Raila presidency after an acrimonious falling out with Deputy President William Ruto.

Ruto, who until 2018 was seen as the President's heir apparent, has been boxed from state power and confined to the periphery amid political turmoil roiling the wobbly Jubilee outfit.

Jubilee secretary general Raphael Tuju on Tuesday revealed that the party has no automatic presidential candidate and that aspirant will go through nomination.

“That primary does not put into consideration any kind of deal that may have been there with the President. That is not something you can hold anybody to account on,” Tuju said.

“There could have been some sort of swearing among friends but there is no way you can make a party to be accountable to that and I think the Deputy President is aware of this. I will support him if he wins the nominations.”

In a bare-knuckle attack on the country's second in command, the Cabinet Secretary without portfolio said they were ready to sacrifice Jubilee for the sake of national unity.

“Even if we were to lose unity in the Jubilee Party so as to bring unity in this country, that is still a higher goal and that is one of the reasons why the President took the extraordinary step of pursuing the handshake,” Tuju said in an interview with Citizen TV.

Why Uhuru will support Raila in 2022 - Murathe

Says this is as a way of settling historical debt and leaving Kenya in safe hands.
News
1 year ago

The nasty break-up in Jubilee appears to be playing in Raila's favour. Some of the President's allies have been visiting him at his Capitol Hill office while others have accompanied him to 2022 strategy talks at the Kajiado home of powerful Cotu secretary general Francis Atwoli.

“We think it is time Kenyans rewarded the long years of struggle by Odinga. They owe to him,” he said.

Murathe, known to shoot from the hip while having the ear of the President, compared Odinga with former South Africa President Nelson Mandela.

Murathe's remarks that were not contradicted by any of the President's allies triggered palpable excitement within Raila's camp.

With the hand of the President coupled with support of Mt Kenya region, Raila's allies have not shied away from expressing confidence that the former prime minister will succeed Uhuru.