• Kang'ata has served as a councillor, Kiharu MP and now Murang'a senator.

• Since the Jubilee purge started, he has emerged as powerful player in the political circles. He has risen in rank in the party and the Senate. 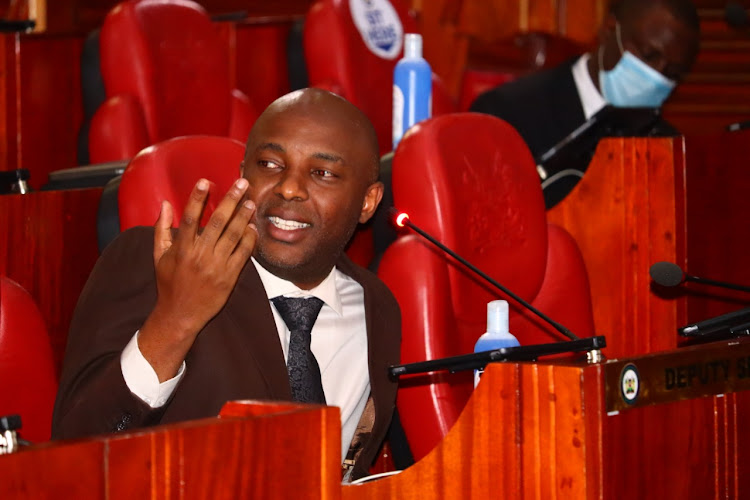 Last Saturday, the Murang’a senator, who is also the Senate Majority Whip, said Jubilee would reconsider its support for the BBI report if the revenue-sharing bill did not pass.

"If for any reason the Bill does not sail through, then we might have to reconsider our stand on the BBI," Kang’ata said in Murang’a.

He has now been accused of threatening senators — instead of lobbying — after he said Jubilee will crack the whip on those who defied President Uhuru Kenyatta in the Bill.

His motion seeking to amend the Senate Finance Committee report to have the application of the new formula postponed to 2022 flopped after 25 senators voted against it. Twenty-two senators voted for the motion.

But Kang’ata told the Star he had very few options left as he lobbied senators to the best of his ability.

That Kang’ata is at the centre of the revenue-sharing debate only demonstrates his rise in national politics.

He has served as a councillor, Kiharu MP and now Murang'a senator.

Since the Jubilee purge started, Kang’ata has emerged as powerful player in the political circles. He has risen in rank in the party and the Senate.

But who is Irungu Kang’ata?

The reggae maestro Peter Tosh's fan has been identified as the poor people's senator.

His major legal battle was described a Goliath and David fight.

He represented Rebecca Kerubo, a guard, against then Deputy Chief Justice Nancy Baraza. She was accused of pinching Kerubo's nose and threatening to shoot her. He credits this win for assisting him secure the Kiharu seat.

He says he identifies with the poor because of his upbringing.

“I was raised among the people and my parents were very humble. They worked as mechanics mingling with the common folk without any class distinction. They imparted strong Christian ethics that guide me up to date,” Kang’ata says.

He also made history in University of Nairobi politics after being elected Sonu vice chairman as a first-year student aged 19. He, however, didn’t serve long as he was suspended in 2000 after just six months for allegedly leading a strike.

Suspended and with the case dragging in court, Kang’ata vied for a councillor position in 2002, the year after which he rejoined university.

He says students’ politics has toned down, but notes times have changed.

“The context surrounding us then was fight for democracy against Moi tyranny. We now have an open democracy that has somehow muted militancy in students politics,” he says.

And while he is better known as a politician, Kang’ata is also making strides in law.

“I practised law in Murang’a then moved to Nairobi and joined State Law Office, International Treaties and Agreements department. I resigned to go into private practice. I handled Kerubo case and it gave me limelight that ultimately assisted me to win Kiharu MP seat."

"I continued practicing nominally but in 2017 after elections, I decided to scale up my practice and went solo,” the law lecturer at Catholic University of Eastern Africa says.

He now handles commercial law and conveyancing, including aviation law. He says his firm has sued Boeing in the US on behalf of the families that lost their loved ones during a plane crash.

He also informs that he is about to complete his PhD thesis titled "Adequacy of Post-2007 Constitutional Mechanisms in addressing Ethnic Conflict in Presidential Elections in Kenya ". He hopes to defend it in the next two weeks.

The staunch Catholic, however, doesn’t want to reveal his game plan opting to leave it at, "Let that remain in the hands of almighty God. He rules our destiny.”

Kang'ata motion flopped on the Senate floor after 25 senators voted against it.
News
1 year ago

Residents seeking amicable solution to end the  impasse over the company’s land.
Counties
1 year ago
by ELIUD KIBII Subeditor and writer
Siasa
01 August 2020 - 01:32