Amina Mohamed: The diplomat who has WTO corridors in her palm

She has previously said that global trade organisation’s rulebook needs to change.

• She is running against seven other candidates seeking to replace Roberto Azevêdo of Brazil, who is leaving office, who will step down on August 31. 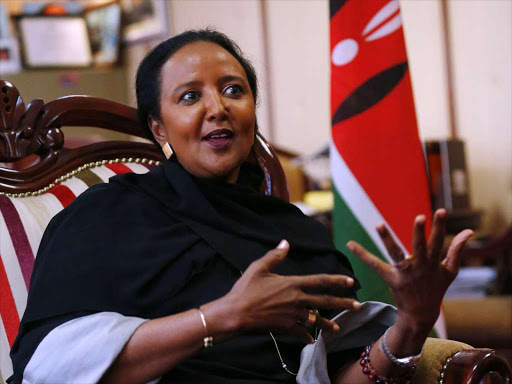 “I know this institution, I am passionate about it, I know the corridors, I have walked them, I have negotiated in them and I think it is one on the most amazing institutions for multilateral trading systems and negotiations,” Amina Mohamed said as she shared her vision for the WTO.

She is running against seven other candidates seeking to replace Roberto Azevêdo of Brazil, who is leaving office, who will step down on August 31.

But what makes her the frontrunner?

Endorsing Amina for the post, President Uhuru Kenyatta said she understands the WTO and its processes, having chaired all its high-level decision-making bodies.

“The length and breadth of her experience with the WTO and the multilateral trading system combined with her extensive track record in international relations and her political experience, I believe is unparalleled,” President Kenyatta said on July 9.

The President recalled Amina chaired the 10th WTO Ministerial Conference in Nairobi in 2015.

“From a personal perspective, my experience working with her over the years and watching her work with others has convinced me that she is an effective leader and without doubt, a master consensus builder,” Uhuru said.

Consensus building is what WTO is about.

She is also the current President of the 14th United Nations Conference on Trade and Development.

Second is her reform agenda. Her call is for reform, recovery, renewal and results for the WTO.

She has previously said that global trade organisation’s rulebook needs to change.

Speaking to the Financial Times in May, she proposed the streamlining WTO’s judicial processes and improving transparency about governments’ trade-distorting actions.

“It is important to be inclusive and show that the membership knows that every part of the globe can make a positive contribution to the running of the WTO,” she said.

“We need someone with the right experience, someone who is committed to the multilateral system … but also has the political stature to be an effective facilitator and a consensus-builder”.

According to her biography on the WTO website, Amina has had a distinguished diplomatic career since 1986, rising through the ranks to become Ambassador/Permanent Representative at Geneva in 2000.

“As the Permanent Representative, she represented Kenya in the UN system, and the WTO among other international organisations,” the biography states.

But before that, she had a legal career, for which she was recently admitted to the bar on July 3.

Amina began her career in 1985 as a legal officer at the Ministry of Local Government, a position that offered her an opportunity to work with the World Bank .

Between 1986-90, she worked as legal adviser in the Ministry of Foreign Affairs, “where she drafted and negotiated various bilateral and international treaties”.

In the UN system, she chaired the Trade Policy Review Body in 2003, and served as the chairperson of the Dispute Settlement Body in 20014. She became the first woman to chair the WTO’s General Council in 2005.

Amina would later rise to the position of UN Assistant Secretary-General and Deputy Executive Director of the United National Environment Programme.

Mohamed was born on October 5, 1961 in Kakamega. She is the eighth of nine siblings.

She Mohamed attended the Township Primary School in Kakamega and later Butere Girls and Highlands Academy.

She moved to Ukraine on a scholarship to study at the University of Kiev, where she studied law to masters level.

There is no stalemate in trade talks between developed and developing countries, Foreign Affairs CS Amina Mohamed has said.Amina, who is the ...
News
5 years ago

'A game changer': Uhuru heaps praise on CS Amina ahead of WTO vote

Amina is Kenya's former ambassador to the WTO.
News
1 year ago