Why six governors are facing impeachment

• MCAs have accused governors of plundering of public resources, nepotism and undermining the authority of the assemblies.

•Observers say the ward reps have suddenly realised their immense powers and many want to wield them to their own advantage. 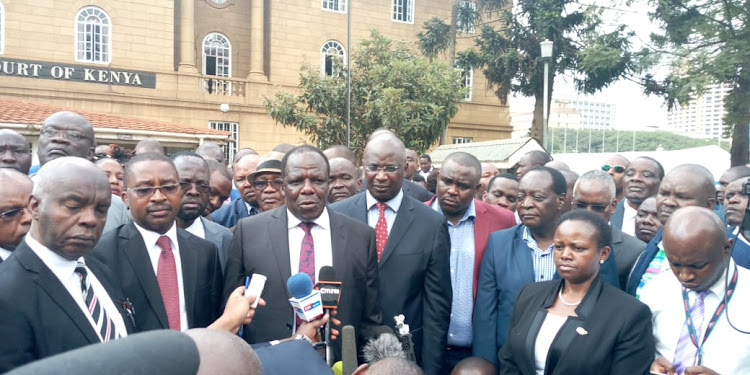 COUNTY BOSSES: County Governors led by CoG Chairman Wycliffe Oparanya speak outside the Supreme Court after seeking the apex court's intervention to unlock the impasse on the Division of Revenue Bill ,2019 on July 15, 2019.
Image: JAMES MBAKA

The successful impeachment of Ferdinand Waitutu as Kiambu Governor in January appears to have opened the floodgates for the removal of more county chiefs.

As Kirinyaga Governor Anne Waiguru fought fiercely  in the Senate this week to save her job and political career following her removal by MCAs, at least six of her colleagues are in line for the chopping board.

Their county assemblies are planning to kick them out  over a raft of allegations including graft, abuse of office and gross violation of the constitution.

The county chiefs have been engaged in fierce battles with ward reps who have accused them of engaging in plunder of public resources, nepotism and undermining the authority of the assemblies.

A fortnight ago, Makueni Senator Mutula Kilonzo Jr hinted that at least five governors were facing impeachment by their assemblies.

“I want to ask senators to approach this debate on the impeachment of Waiguru in a sober manner bearing in mind there are about five more (impeachment cases) that are coming," he said on the Senate floor.

Governance expert Martin Andati said the MCAs’ realisation of their immense powers and extortion are the key motivations for the new wave of impeachments.

“The first lot of the MCAs didn’t know their powers well. They are now reawakening and knowing that they really have powers. But of course, some of them could be on extortion sprees,” he said.

Andati observed that unlike the pioneer governors who wallowed in cash due to lack of political will to fight corruption, the second crop of governors are in a tight corner and cannot raise millions to "feed and silence the hungry" MCAs.

“They used to make bench making trips all over, meaning they were earning more money. But today, governors don’t have that luxury for them anymore. They don’t have as much to dish out in terms of handout and trips. That is why some MCAs are not happy,” he added.

In Kitui, Governor Ngilu’s impeachment motion is set for tabling in the assembly on Monday ahead of debate on Tuesday.

In the motion sponsored by Majority leader Peter Kilonzo and supported by 39 out of 54 MCAs, the ward reps are accusing the governor of graft, conflict of interest, abuse of office and violation of the Constitution and undermining the authority of the assembly.

The governor has dismissed the allegations, claiming her long- standing political rival Kalonzo Musyoka was behind the motion.

“During my inauguration, Kalonzo warned that I won the governorship but I will have a rough time because his party controls the assembly,” she was quoted saying.

The county director of communications Galgalo Fayo confirmed the governor’s sentiments, saying that it was in public domain that Kalonzo had threatened to give the governor a hard time.

In the motion, Kilonzo has accused the veteran politician of violating the Constitution and the County Government Act by disregarding Senate summons to answer audit queries involving the spending of as much s Sh20 billion allocated to Kitui county from the National Treasury in 2017-18 and 2018-19.

The governor is also accused of conflict of interest and abuse of office in purchasing a stone crusher plant for Sh85.30 million from a firm in which her son-in-law is a partner.

Further, the county chief is blamed for influencing the award of a Sh105 million tender to Aventure Limited, which is allegedly owned by a sister-in-law.

They have accused him of misusing Sh6.9 million Covid-19 funds and skewed recruitment of staff.

He is also on the spot obtaining 600 jerrycans, which he had said were donated but a source said cost Sh10,000 each for the Bungoma County Referral Hospital.

“The impeachment of the CECs is just the tip of the iceberg we will soon go for the big man himself,” Khalaba ward MCA Majimbo Okumu told the Star.

Okumu termed the planned impeachment as a systematic and highly orchestrated exercise that will be exposed at "the right time".

Wangamati’s communications director Tim Machi dismissed the planned motion as witch-hunt and malicious, claiming it was being sponsored by Wetang’ula after their falling out.

“There is absolutely no ground for the said impeachment. What is happening is the culmination of blackmail and manipulation,” Machi said.

Machi claimed the governor has started collecting signatures to petition the President to dissolve the county.

In Isiolo, Governor Kuti is not sitting pretty after some MCAs set in motion a  process to remove him from office.

Led by Chari MCA Ali Dima, the ward reps are accusing Kuti of graft and nepotism. They have questioned huge allocation – Sh359 million — to fight Covid 19.

“There is a lot of evil going on in the county government and we are going to fight until the truth comes out,” Dima said.

But the governor dismissed the allegations as unfounded, saying those behind his removal are being usedby  his political rivals who are eyeing his seat in 2022.

“There are only two disgruntled members and they have been removed by their own colleagues from various house committees. They are now being used by people who want to be governor in 2022,” Kuti said.

“They are only two, if they can get one more signature, I will stand impeached. I have 17 MCAs and 15 of them are very solid,we work together. We have achieved a lot,” he said.

Kuti, who chairs the Council of Governors Health subcommittee, attributed the latest wave of impeachment to lack of openness and consultation between governors and their MCAs.

“As in my case, as soon as we were elected, we sat and we said, you have your roles, I have my roles. I will respect your roles, you respect my roles. Should you find that there are things not going right, before we rush to the drama of motions, newspapers or wherever, call me, let’s have a kamkunji,” he said.

In Vihiga, Kwale and Trans Nzoia, governors are not feelig secure, despite the impeachement temperatures cooling down. They all deny all acusations against them.

Vihiga’s Ottichilo had to move to court,  forcing the MCAs to withdraw an impeachment motion against him. They accused him of bloating the county’s wage bill and approving irregular projects.

MCA Victor Ijaka who was removed from his position as Majority Chief Whip for pushing for the governor’s removal, claimed the county chief failed to clear the county’s Sh1.8 billion debt.

He also claimed that the governor hired 1,500 casual workers when he was elected, bloatingthe county’s wage bill.

“We expected to have a reduction in our wage bill so we could invest in other projects  but the story was different,” Ijaka said.

The MCA also questioned setting up a Sh95 million data center saying the money was never appropriated by the assembly.

The governor blamed his predecessor for the ballooning wage bill and growing debt.

“We can’t start talking of impeachment when the same motion was withdrawn just a few months ago. That won’t make sense at all  and the public will discredit the house,” Asava said.

In Kwale, the possible impeachment of Governor Mvurya is still hovering despite the assembly leadership denying the claims.

The governor has been tussling with with MCAs over the Sh160 million supplementary budget.

The county chief had channeled the cash to Covid-19 relief food but the MCAs rejected the allocation and directed it towards water projects and expansion of Covid treatment facilities.

A group of MCAs known as the G7 has accused the governor of under-performance.

They faulted him for presiding over the water crisis in the county and channeling Sh160 million in a supplementary budget to Covid-19 relief food.

Mkongani MCA Ndoro Mweruphe, who has been at loggerheads with the governor, said no signatures have been collected or impeachment motion against the governor filed.

“What I know is MCAs have summoned the governor to appear before the assembly to explain why he has delayed delivering the county address,” Nyassy said.

In Trans Nzoia, the MCAs are accusing governor Khaemba of failing to tame alleged runaway graft in his administration.

The governor has rubbished the allegations and accused the MCAs of constantly pressuring him.

“I’m tired of being arm-twisted by these MCAs who have fora long time been using these dirty gimmicks to force me to give in to their thirst for money,’’ Khaemba was quoted saying last week.